Film: Immortality (The Wisdom of Crocodiles; Wisdom of the Crocodiles)
Format: Streaming video from NetFlix on laptop. 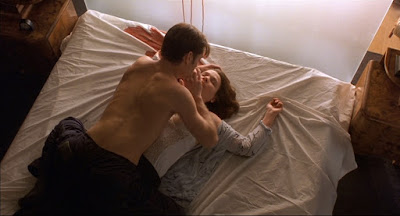 My boss loves Jude Law in the way that I love Penelope Cruz, so now and then I’ll watch a Jude Law movie to see if it’s one that she’d like. With Immortality (also known as both The Wisdom of Crocodiles and Wisdom of the Crocodiles), I think it’s better off to avoid the mention. It’s not a terrible movie, but it’s not one that I think would be in her wheelhouse despite the Jude Law sexy time and even a couple of frames of full-frontal. This is a difficult movie to recommend because it’s so tonally strange.

Immortality is only vaguely a horror film in that Steven Grlscz (Jude Law) is something like a vampire. He’s not anything like the normal sort of vampire, though. He can go out in sunlight and eat food and he doesn’t need to sleep in a coffin or the earth of his burial. He does, though, need blood about once a month. While the blood is important to him, what he actually feeds on is the emotions in the blood. Positive emotions like love work better for him while negative emotions work but make him ill. Because of this, Steven romances women, gets them to fall in love with him, and then kills them. It is his belief that if he can truly get a woman to fall for him, it will cure his condition.

In the first few minutes of the film, we see Steven save a woman named Maria (Kerry Fox) who is attempting to kill herself by jumping in front of a train. A quick romance ensues, which is capped by Steven killing her, drinking her blood, and then coughing up a bizarre crystal that is eventually explained in the second act. Once Maria is dead, he finishes filling out a small scrapbook about her, and we see that he has shelves of these books, implying that he has been doing this for some time. He also disposes of the body on the coast.

Following this episode, Steven encounters Anne Levels (Elina Lowensohn) and begins pursuing her. The attraction is mutual. As this happens, the body of Maria is hauled up in a fishing net off the coast, which leads to an investigation headed by Sergeant Roche (Jack Davenport) and Inspector Healey (Timothy Spall). Steven, as Maria’s former lover, is naturally on the top of the suspect list.

The bulk of the film consists essentially of three things. First, we learn about Steven’s strange condition. Again, he is a vampire, but he requires emotion in the blood of his victims and only needs to feed about once a month. When he doesn’t feed for a considerable period of time, his body begins to break down. Cuts don’t heal, he becomes pale, and death becomes imminent. Second, we get a lot of the ups and downs of the romance between Steven and Anne, moving slowly to one conclusion or another. Third, and this turns out to be more than simply a distraction, is the sudden and surprising friendship between Steven and Inspector Healey. While Steven is guilty, there are plenty of things in what happened with Maria (like saving her life) that seem to point in other directions. Steven also saves Healey from a group of thugs.

Immortality is on the Fangoria 101 Best Horror Movies You’ve Never Seen list, and in that respect it seems misplaced. There are a couple of horror moments here that in general wouldn’t be out of place in a gritty crime thriller. While I have classified this as a horror movie, it’s more to keep all of the horror movies on those lists under a common heading. This is far more a strange romance with a unique character than any other genre. For this, it’s a bit disappointing, since I expected a lot more of what makes horror horrific than I got here.

So if Immortality fails as a horror movie, how does it perform as a romance? Sadly, it doesn’t perform that well here, either. Set a century earlier, this is not a bit different from a standard bodice ripper. We’ve got a dangerous and attractive man involved with a woman who, at least in terms of this story, is more or less an innocent, and there are plenty of discussions of true love and lots of quotes from Song of Solomon.

This is relatively early in the career of Jude Law, coming a little after Gattaca and a little before Existenz. He’s decent here, but nothing exceptional. Oddly, on at least one of the covers/boxes I’ve seen, he looks strangely Asian. Elina Lowensohn is presented in the film as at least partly Chinese. She may be (although she was born in Romania), but her accent is pure Eastern European. She is exotic looking, which makes her right in line with a Harlequin Romance-style story.

Ultimately, Immortality is slow and unimpressive. There’s a kernel of something good here, but there’s far more potential here than what is actualized on the screen.

Why to watch Immortality: A very strange vampire story.
Why not to watch: It’s far more Harlequin Romance than horror movie.

Posted by SJHoneywell at 6:16 PM

Email ThisBlogThis!Share to TwitterShare to FacebookShare to Pinterest
Labels: horror, Immortality, Po-Chih Leong, romance, The Wisdom of Crocodiles, Wisdom of the Crocodiles