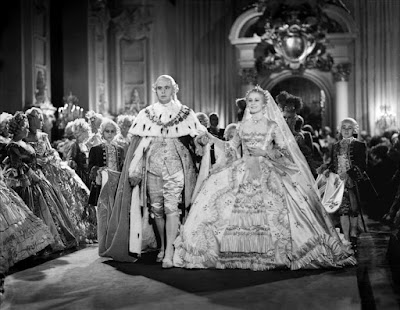 One of the most interesting figures of history is that of Marie Antoinette. The film Marie Antoinette from 1938 suggests that she may also be one of the most misunderstood. Of course this is coming from a time and place where history was often bent conveniently to fit the desired narrative. There are other considerations here, after all. This is a film about a haughty, rich, royal-blooded woman who was legendary for her disdain of the poor. The film is from the end of the Great Depression, in a time when public sentiment toward the rich couldn’t have been that positive. Despite this and a massive (for the time) budget, Marie Antoinette was quite the success and garnered Oscar nominations for two of its main stars.

Young Marie Antoinette, Austrian princess of the Hapsburgs (Norma Shearer) is told that she is being sent to Paris to marry Louis, the dauphin and future king of France (Robert Morley). She is overjoyed until she actually gets to Paris and meets her future husband. Louis is blubbery, emotionally weak, and hates being in public. The marriage happens anyway, with Louis telling Marie that night that the only reason the two are married is to produce an heir at the insistence of Louis XV (John Barrymore), his grandfather. But, says Louis, such a thing will never happen. He essentially abandons Marie to a life in court where she gambles and socializes to prevent her from becoming bored.

It’s at this time that we meet three other people who will be key for at least part of the film. The first is the Duke D’Orleans (Joseph Schildkraut), who becomes Marie’s favorite despite Louis’s disfavor. D’Orleans is an almost comic figure in his appearance. He is constantly heavily made up, with penciled-on eyebrows and a heart-shaped beauty mark. The second person of importance is Madame du Barry (Gladys George), the mistress of King Louis XV. There is immediate dislike between Marie and du Barry, all of this initially coming from du Barry. At first, this is because Marie has more or less usurped her position as court flavor of the month. Later, this is because of Marie’s “inability” to have an heir to the throne.

Our third important person is Sweden’s Count Axel de Fersen (Tyrone Power). He is introduced to Marie under less than favorable circumstances, but eventually the two are reunited and essentially pledge undying love for each other on this second meeting. He’s not actually in the film that much, but he shows up at a few key points to inject a little romance.

Anyway, at a ball Marie opens up a can of social whoop-ass on du Barry. This causes Marie to be called before Louis XV, who announces that he will send her back to Austria with her marriage annulled, and event that costs her the friendship of D’Orleans, who was nice to her only because she was going to be the next queen. At her lowest moment, she determines to run off with Axel, but the king dies of smallpox, making her husband the new king and her the queen. In fact, she agrees to stay with Louis because even though there is no love in the marriage, there is a great deal of fondness and respect. The two resolve to be monarchs and eventually Marie starts producing children.

But, of course the French Revolution happens and everything goes to hell. The last hour or so of the film proceed pretty much the way you’d expect it to, what with the peasants revolting and wanting to chop off the heads of pretty much any noble they could find. What’s interesting here is that the film puts forth the narrative that Marie was not so much callous to the plight of the poor but both mainly unaware of it and also framed by some of those in court working against her. I have no idea how realistic this is of the actual history, but it does make for a more interesting narrative.

I think it can be argued that Marie Antoinette is overlong, clocking in somewhat north of 2 ½ hours. While that’s true, there are also some very good scenes here. The conciliation between Marie and Louis is tender and heartfelt and really kind of sweet. This is Morley’s scene to carry and he does it beautifully. Morley is immediately recognizable to anyone a fan of movies of this era and well beyond. This was only his second film and was his only Oscar nomination (for Supporting Actor). It’s a solid nomination, too. He’s excellent here as a socially awkward man thrust into a situation that has demands far above his capabilities. There’s also a marvelous scene where he confronts his grandfather on the proposed annulment of his marriage. There’s something pitiable about him in this film, and it’s exactly what the role requires.

I should probably talk about Norma Shearer as well, since it’s her nomination that caused me to watch this film. She’s good, and I don’t think the nomination is a bad one. If nothing else, she deserves some credit for managing to walk around in these staggeringly huge dresses without bumping into things or knocking people over. The romance with the Tyrone Power character feels rushed and unsatisfying, but that’s hardly her fault. It is interesting that where the typical film romance is between an older man and a younger woman that Norma Shearer was a good dozen years older than Tyrone Power, not that she looks it.

I should also mention the costumes, which are pretty exceptional. This film cost about $3 million (close to $50 million today), and a large part of that had to go to the amazing and elaborate dresses worn by the women. It’s also an interesting comment on the fashion of the time, which I simply don’t understand. Why on earth would anyone want to wear a dress with three-foot side extensions?

For what it’s worth, Marie Antoinette is pretty watchable, but I’m not sure it’s one I’ll ever find the need to watch again.

Why to watch Marie Antoinette: Robert Morley’s best performance and some amazing costumes.
Why not to watch: It’s 30-45 minutes longer than it needs to be.