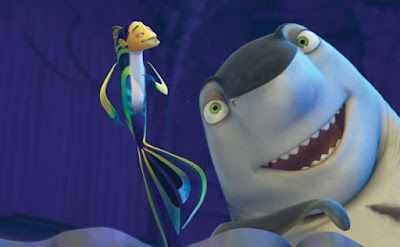 I knew when I added Best Animated Feature to my list of categories that eventually I would have to sit through Shark Tale again. I really do try to be as upbeat and open minded as I can be when it comes to this project, but this is a movie I’ve seen before and it’s a movie I know that I really hate. There is nothing I find appealing in what comes off as a combination of The Godfather and Finding Nemo. I don’t like the story, the characters, or the artwork, and with an animated movie, there’s not much left.

Let’s get this over with. Oscar (Will Smith), a wrasse, works in the underwater equivalent of a car wash as the guy who scrubs the tongues of whales. What he really wants is money and fame, and so he has a variety of get rich quick schemes that he finances by borrowing heavily from Sykes (Martin Scorsese), his pufferfish boss. Angie (Renee Zellwegger), an angelfish who also works at the whale wash, carries a torch for Oscar for, frankly, unknown reasons.

Meanwhile, the reef on which all of the fish in this tale live is constantly terrorized by sharks headed by Don Lino (Robert De Niro). Lino’s son Frankie (Michael Imperioli) is in the mold of his mobster father while other son Lenny (Jack Black) is a vegetarian and something of an embarrassment. Sykes, who is more or less a low-level mobster, runs afoul of Lino and suddenly must pay protection, which means that Oscar needs to pay him back all of the money he owes. He gets this from Angie but bets it on a (sea)horse and loses, making him fish-sona non grata.

Because this is how these things work, Frankie is teaching Lenny how to be a shark in exactly the same place that Oscar is being tortured by Sykes’s hench jellyfish Ernie and Bernie (Ziggy Marley and Doug E. Doug respectively). Lenny scares away the jellyfish but refuses to eat Oscar. Frankie, upset by this, charges in only to be killed by a descending boat anchor. With the massive shark dead and only Oscar around, he claims credit for the kill, making him the new hero of the reef. The sharks, of course, want revenge.

The whole second act of the film is concerned with Lenny forcing Oscar to take of him because he doesn’t want to go back to his father. They concoct a plan by which Oscar will “defeat” him to enhance Oscar’s reputation. Angie finds out and goes along with it. Oh, and there’s also Lola (Angelina Jolie), who becomes a temporary love interest for Oscar despite her open admission that she is completely superficial and only cares about his money and fame.

So let’s go through the problems here. The most obvious problem is the art. It’s garish an unattractive. Beyond that, the fish essentially live in a human world underwater. They have houses and play video games. They also have the disconcerting habit of pulling up into a vertical position whenever they do anything. Their tail fins essentially turn into legs and side fins into arms. They even have little hands at the ends of their fins. It just looks weird. They even sit in chairs.

I don’t get any of it. Why the hell do the fish use elevators? This is especially weird when the fish frequentlyswim up and down. Why do that have fire hydrants that shoot water…under water? It’s so nonsensical. I’m willing to go along with talking fish, but none of this makes sense.

An additional and even more serious problem is that these characters are generally awful. Tops on that list is Oscar, who is a complete asshole. He’s a self-aggrandizing douchebag at the start of the movie and continues to be one throughout the film. He also almost never shuts up, and when he is talking, he’s almost always talking about how great he is. This is certainly connected to the film’s ultimate message about the things that are supposed to be important and how Oscar was already somebody when he was actually a nobody. But since Oscar has always acted like he was King Shit, the message rings very hollow.

I can even forgive all of the stuff that doesn’t work on a “realism” level. If the movie were actually good and worth watching, I wouldn’t care that there’s evidently coral reef next to the wreck of Titanic where the sharks live. If the movie were good, I’d live with it. When the movie fails on pretty much every other level, though, I feel obligated to mention the additional stupidity.

A lot of the jokes don’t work, either. Like a lot of movies that feel derivative, Shark Tale goes for cheap laughs. Many of the jokes were topical in 2004 but fall flat now. It’s just another issue I have with the film; it didn’t even attempt to be something relevant after the time it was made, and it isn’t.

Finding Nemo was released the year before and won the Best Animated Feature Oscar. Shark Tale feels like a retread. It feels even more like an Asylum film, capitalizing on the popularity of one film with a cheap knockoff version of the same basic premise. It’s expected when it comes from a studio like The Asylum, but it’s really disappointing when we get that from Dreamworks.

I have to think very hard about which nominee for Best Animated Feature is my least favorite. Shark Tale is in the running with Brother Bear. I just hope there’s not one I like less then these two.

Why to watch Shark Tale: You have 90 minutes and hate your own existence.
Why not to watch: An aquarium is more entertaining.

Posted by SJHoneywell at 5:04 PM