When Irish Eyes are Murderous 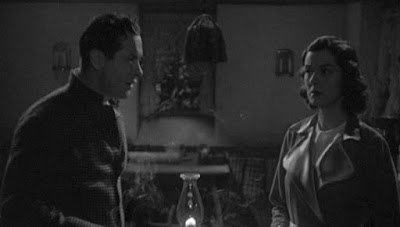 Night Must Fall has been sitting on my DVR since last February. It’s one of the dozen or so movies that I’ve had recorded and simply have not gotten to. So why watch it now? I decided to watch it when I realized it was the last movie I had to see to complete 1937 as a year. So it was that I decided to finish off a second year and finally knock this film out. I knew nothing about it beyond the short TCM summary on the recording, so I went in essentially with no preconceptions and not much in the way of expectations.

Well, there are times when having no expectations works out because the film isn’t worthy of expectations. There are other times when having no expectations works out even better because the film is surprisingly good. Happily, Night Must Fall is of the second variety. This is a surprisingly effective and tight thriller that goes to some very unexpected places for a film from 1937. While it’s pretty tame by today’s standards, there are some gruesome implications here and suggestions of murder and dismemberment as well as a the unseen but obvious presence of the first murder victim’s head in a basket.

Mrs. Bramson (Dame May Whitty) is a snippy, angry old woman who spends her life in a wheelchair. That wheelchair is how she controls everyone in her house; she doesn’t really need the wheelchair. Mrs. Bramson is both manipulative and a hypochondriac. Among the people working for her is her niece, Olivia (Rosalind Russell). Olivia doesn’t much like being her aunt’s servant; the old lady is mean and ungrateful as well as constantly demanding of everyone around her. There’s a bit of excitement at the start of the film when Mrs. Bramson contemplates firing her maid Dora (Merle Tottenham), but forgets about it when the police arrive looking for a missing woman.

Around this same time, Dora introduces the household to Danny (Robert Montgomery), her Irish boyfriend. Danny works for the missing woman. He proceeds to charm Mrs. Bramson and arranges for a new job for himself as her caretaker. Olivia finds something instantly shady about Danny, but she’s also vaguely attracted to him. Danny proves himself to be a sociopath by manipulating everyone around him, in particular the manipulative Mrs. Bramson. He does this in part by buying a cheap shawl and giving it to her, claiming it was his mothers. Olivia spots the deception (he’s left the price tag on it), but helps him out by removing it before her aunt can spot it. An additional monkey in this wrench is that Olivia is being actively courted by Justin Laurie (Alan Marshal), her aunt’s lawyer. An additional wrinkle is that Danny sees Mrs. Bramson putting a large amount of cash in her safe.

The bulk of the movie is a slow build as the people in the house deal with the presence of Danny. Things heat up when the body of the missing woman is found close to the Bramson property and is found minus her head. Suspicion is raised in Olivia when she discovers that Danny has a locked satchel that would easily accommodate a head in his room. She spends the bulk of the film both repelled by and attracted to him.

I won’t spoil the movie. The last 20-30 minutes of the film is both the payoff and the biggest issue with the film. It’s here where we finally discover everything that Danny has been up to and what motivates him. It’s also, sadly, where the film needed to cobble together a happy ending so that the film could actually be shown in theaters. For a movie filled with tension for almost all of its running time, the last couple of minutes are a complete letdown.

There are three main performances here. Two, Robert Montgomery and Dame May Whitty, were nominated. I agree in both cases. Whitty could have done something very similar to this role in a comedy and had it work just as well, but in Night Must Fall, there is an edge to her that keeps the performance out of the realm of the comedic. She’s not a salty old woman with a heart of gold; she’s selfish and nasty and there are no cracks in that performance. Montgomery was never better than he was here. Danny is a conniving and charming sociopath and Montgomery’s performance is completely believable and at times chilling throughout. What makes it work more than anything else is that he just as often charms us as he does the other people in the film.

It’s Rosalind Russell who is the weak link here. I tend to like Russell in films because she works so well as a flamboyant, larger-than-life actor. Here, she’s subdued and simply unappealing. She’s bland, and Rosalind Russell should never be bland. I’m sure this is much more the case of the screenplay and characterization than her, but whatever the reason, she’s the low point of an otherwise solid thriller.

Night Must Fall is surprisingly entertaining, and the biggest reason for its success is that it goes exactly where it tells us it’s going to go. There’s a glimmer of hope throughout the film that perhaps we’re reading all of the characters wrong, but we’re not. It’s worth tracking down.

Why to watch Night Must Fall: A surprisingly effective little thriller
Why not to watch: Rosalind Russell is completely forgettable in this.

Posted by SJHoneywell at 4:56 PM