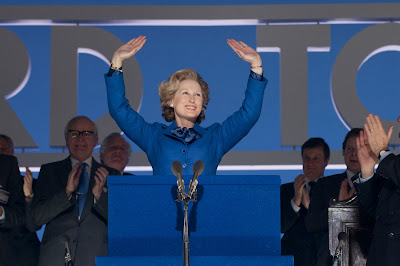 I don’t really know where to come at a film like The Iron Lady. It is, as expected, well made. It features the expected great performances from Meryl Streep and Jim Broadbent. I’d be lying if I called myself a fan of the film’s subject Margaret Thatcher, though. The Iron Lady is not a warts-removed biopic, but it does seem to depict her as someone who should be more pitied than anything else. I didn’t think that the film would end up vilifying her, and that’s not what I expected to see. But is pity really the right emotion we should have?

The film takes place in more or less the present day, or at least the present day of Margaret Thatcher (Meryl Streep) at the time of the film. By 2011, she had become an old woman, something of a punchline for particular types of aggressive policies in British government, and widowed. Those not familiar with her personal history would not know that last point right away, because her husband Dennis (Jim Broadbent) is materially present in the present of the film. It’s only later that we realize that Margaret is having something akin to a waking hallucination of her husband that we begin to understand her somewhat fragile mental state.

In the present, or at least taking only the present parts of the film as a whole, The Iron Lady is more or less about her giving up her husband in some sense, of letting him go by getting rid of his possessions that she has kept. The actual meat of the film is a walk back through her life, focusing primarily on her political life rather than her family. Naturally, this shines its light in general on those places that are the most interesting or most polarizing—her initial move to leadership of the Conservatives, the Falkland invasion, the fall of the Berlin Wall, and her subsequent fall from power. There’s very little about her family here aside from hints that her son has moved to South Africa and that she has a tense relationship with her daughter.

It’s an interesting choice that the film takes some of the significant events of the narrative out of their historical order. What we’re shown is a prime minister who begins her tenure in the position with a number of difficult and unpopular decisions and fights through adversity to become one of England’s most popular political leaders only to be metaphorically shanked by her party at the height of her triumph. In reality, the Falkland invasion happened in 1982 (which marked her rise) while the coal strike and the attempted assassination of her happened two years later.

This playing with the historical timeline can be seen in two ways. The first, more charitable possibility, is that this reflects Margaret Thatcher’s fragmenting mental state. After all, she’s holding conversations with her deceased husband, so it’s not that much of a stretch to think that perhaps her sense of time and the order of events has gotten a bit wonky. The less charitable view, and the one I think is more likely the truth in this situation, is that the narrative of her rise and fall works better with the events in that order. It’s a shame when history doesn’t match the ideal narrative, but that seems a poor reason to rewrite history.

The Iron Lady won both of the Oscars for which it was nominated—Meryl Streep won her third Oscar (and her 17th nomination!) for the role. The other winner was the makeup crew. I’ve not seen all of the Best Actress nominees for this year yet so I’ll hold my judgment there, but I can say that the makeup work is excellent. Streep not only looks like Margaret Thatcher, she genuinely looks the appropriate age for each section of the film. The cosmetic work is seamless and impressive, and is one of the best aspects of the film.

I should likewise recognize Alexandra Roach and Harry Lloyd who play the younger versions of Margaret and Dennis Thatcher in some of the early flashback sequences. While they are certainly played by different people, there is a sense of continuity from one to the next rather than a sense of multiple people playing the same part.

The most pertinent criticism I can make about The Iron Lady, though, is I honestly wonder how many people will care about a film like this down the road. While Thatcher certainly had a lasting impact on British politics and even the world stage, I’m not convinced that this film or even the subject matter comes across as important enough to care that much. I was personally interested on some level because I remember these years. I remember the Falkland invasion and her relationship with Ronald Reagan (only hinted at here). My kids don’t, though, and I don’t know if they ever will or ever need to. Like Thatcher herself, this is an artefact that will lose importance over time.

Why to watch The Iron Lady: The performances you expect from a solid cast.
Why not to watch: The emotional tone is strange.