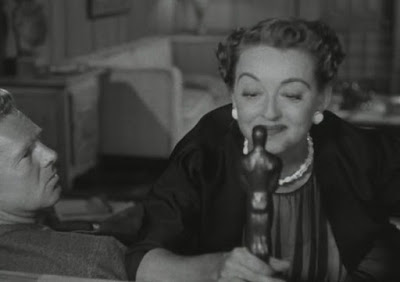 Like any sane human being, I like Sunset Boulevard. In fact, “like” is far too mild a word for how I feel about it. But one of the things that most people also seem to like is a happy ending. So what do you get when you take one of the greatest films noir ever made and figure out a way to end with everyone alive and happy? You get The Star, the movie that earned Bette Davis her ninety-millionth Oscar nomination (okay, it was her tenth).

Margaret Elliot (Bette Davis) is a former box office queen who has faded into something like obscurity. As the film opens, an auction house is selling off a number of her personal possessions to pay her creditors. She walks past and sees her agent (Warner Anderson) walking out with something that was once hers. They talk, and it’s evident that Margaret is completely broke and wants her career back. It’s just as evident that the movie world, at least the world of starring roles, has passed her by.

We also get plenty of backstory in the first few minutes. We discover that Margaret has a child named Gretchen (Natalie Wood) and that her ex-husband has become a star and has remarried. Additionally, Margaret’s sister and brother-in-law (Fay Baker and Herb Vigran) are completely dependent on her for money, which she no longer has. Despondent once she kicks her sister out of her apartment, Margaret packs up her Oscar (actually one of Davis’s real Oscars, at least for the first part of the scene) and goes for a drive, just her, Oscar, and a bottle of booze. This earns her a night in the drunk tank and scandal to rest on top of her already failed career.

She is bailed out by Jim Johannsen (Sterling Hayden), better known as Barry Lester. Jim is someone who she once insisted star in a movie with her despite his never having acted before. After a taste of life in front of the camera, he retreated, changed his name back to Jim Johannsen, and used what money he had to buy a small ship repair business. But he’s always remembered Margaret and has always loved her secretly. Jim does what he can to show Margaret that her life has become nothing more than chasing after the same dream and getting further and further away from it.

Margaret is tempted by the life that Jim offers her. She attempts a real job, which fails spectacularly, and then the heavens open and she is given a chance at a small part in a film she’d always wanted, albeit in the starring role. The screen test goes disastrously, though, and Margaret hits her lowest possible point. But as I said at the top, this is a version of Sunset Boulevard with a happy ending, which means that Margaret will have an epiphany a few minutes before the end and everything will work out right.

That ending is mildly satisfying, but it would have been much more so without Sunset Boulevard released a few years prior. The Star is absolutely treading on the same ground here of a star desperate to maintain her relevance in a world where youth is king and nothing can be done about it. Davis’s performance is far less sexual than Gloria Swanson’s, which puts a much different spin on the tale. In Sunset Boulevard, Gloria Swanson’s character is concerned both with getting back into the movies and with demonstrating her sexual desirability. Here, Davis’s character is really only concerned with the former. Her desirability is of concern only in how much it might make her a more bankable star or get her a role in a movie…any movie.

The problem, of course, is that I’ve seen Sunset Boulevard and The Star isn’t it. Bette Davis may well have been the greatest actress of her generation, possible in film history, but without the supporting cast, Billy Wilder’s direction, and that monster screenplay, she simply can’t compete. The story flatly isn’t as good and Sterling Hayden is no William Holden.

I realize this comes across as harsh, like Hayden and even The Star are second-rate commodities. That’s not my intent. After all, I’m comparing this to one of the finest films of its type ever made. The Star is a perfectly serviceable film and has its own great moments. Margaret’s screen test is awful (I can only imagine what it must have been like to get Bette Davis to intentionally flub a scene), but her reaction to it is magnificent. So too is the scene where she confronts a pair of rude customers in the store where she briefly works.

But all of the good scenes in the world can’t prevent this from being in some respects a wannabe film reaching for heights that had already been hit better and earlier. In a way, the story of The Star is a metaphor for the reality of the film. It’s desperate to get somewhere that it simply can’t get.

Why to watch The Star: Because Bette Davis should always be watched.
Why not to watch: It’s a happied-up version of Sunset Boulevard.