Certain film genres, over time, develop a particular reputation in that there are things you expect from them as a member of the audience. Sometimes it’s a particular running theme, a specific type of plot twist or ending, a general type of character, even a specific actor or actors. Every genre has its conventions, perhaps none quite as detailed as film noir. Sitting down for some noir action tends to mean a hard-bitten detective, a complicated plot, a femme fatale or two, wise guys, danger, and snappy dialogue, particularly with a voiceover done by the detective. No one is more associated with film noir than Humphrey Bogart. But Bogie didn’t make them all. 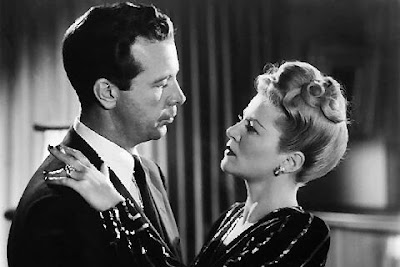 Murder, My Sweet, which started life as Farewell, My Lovely until too many people mistook it for a musical of a similar name, starred Dick Powell, whose early career was in musicals. Powell plays the great mystery writer Raymond Chandler’s greatest creation, Philip Marlowe. Things start out easily enough, as in any good noir. Marlowe is contracted by a former convict named Moose Malloy (Mike Mazurki) to find a woman named Velma Valento.

Moose, who is none too bright and far too crude, claims to have once been engaged to Velma before he was sent to prison. All he wants is Velma back. Marlowe tries to track her down, but is sidetracked when a man named Lindsay Marriott (Douglas Walton) contracts him for another job. Marriott pays Marlowe $100 to go with him on what appears to be either a drug buy or at least an exchange of cash for stolen goods. Sadly, the job goes badly; Marlowe is clubbed over the head and Marriott is beaten to death.

Now things get really fun. Marlowe is questioned by the police, who let slip something about a jade necklace and a man named Jules Amthor (Otto Kruger). When Marlowe gets back to his office, he meets a young female reporter who turns out to actually be a young socialite named Ann Grayle (Anne Shirley). It turns out that Ann’s step-mother Helen (Claire Trevor) had a jade necklace stolen from her, perhaps by Lindsay Marriott. And now we have more plot threads than it seems like we can handle. Then the bodies start to pile up, and life gets more and more interesting for Marlowe, interesting in the way of that traditional Chinese curse.

Any noir depends on its plot, of course, but a good plot isn’t enough to keep people in the seat. You also need at least one great (and yes, I’m using this word intentionally here) dame, and a couple is better. This one has two in the Grayles. While Helen is presented in slinky clothes and the forward personality, it’s Ann—all giant shoulder pads and crooked nose—who is the woman to watch.

The big sell here, though, is Marlowe’s patter and voice over. No one really truly speaks like Marlowe does, but it’s a joy to listen to. The man is quick with a metaphor, and what metaphors he uses! There is such pleasure in simply listening to the man describe something. Even a silly, straightforward plot would be made entertaining by Powell’s internal monologue and pieces of dialogue. There’s not an actor in the world who wouldn’t kill to say these phrases. “She had a face like a Sunday school picnic,” and “She was a gal who’d take a drink if she had to knock you down to get the bottle.” You can’t put a price on dialogue that entertaining. 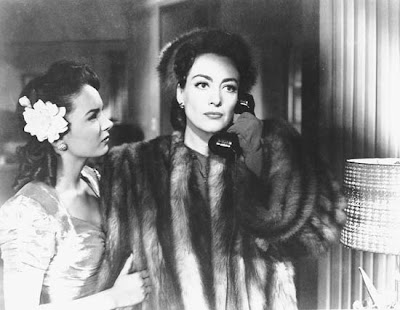 Any good noir involves a dead body or two, and in Mildred Pierce, we don’t have to wait long to get one. The film opens with a series of gunshots and a man flopping dead on a floor. He gasps out the single word, “Mildred,” before breathing his last. We then meet Mildred Pierce (Joan Crawford), our title character, who looks to be about to throw herself into the ocean to kill herself before she is stopped by a cop. She runs into an old friend/pseudo-flame Wally Fay (Jack Carson) and takes him back to her house. She runs off, Wally finds the body, and now the cops are involved.

We get Mildred’s side of the story in flashback, and from this point forward, it sure doesn’t feel like a noir anymore, but a domestic drama. Mildred is married to a schlub named Bert (Bruce Bennett) who is dallying with the woman down the street. Bert also objects to the way Mildred is raising their daughters, Veda (Ann Blyth) and Kay (Jo Ann Marlowe). Mildred dotes on Veda, who is spoiled and expects only the very best things in life for herself. Kay is something of a tomboy. She kicks Bert out, and now has to fend for herself, and fend off the advances of Wally.

Eventually, Mildred gets a job at a restaurant, which she keeps a secret from Veda, knowing that Veda will torment her relentlessly not only with working, but working at such an “embarrassing” job. Mildred continues to work herself raw, until she decides to open her own place, which she does by working out a deal with a faded heir named Monte Beragon (Zachary Scott). Sharp-eyed viewers will remember that this Beragon character is the same guy who died in the beginning. Those of a more Japanese monster slant will soon realize that he is not the spike-nosed monster that once fought Gamera the flying turtle.

In the film’s tearjerker moment, Kay dies from a sudden (and evidently severe) bout of pneumonia, leaving Mildred and Veda to themselves. Mildred dotes on her daughter even more, as does the destitute but high-living Monte, and it soon becomes evident that Veda is a horrible person. While certainly beautiful, she is twisted, conniving, and evil, thinks only of herself, and wants only money and nice things. She is, in short, a rotten kid. But Mildred is devoted to her and will do anything for her, something that Veda has understood for years. The fact that Veda is attracted to Monte makes for an uncomfortable and weird romantic triangle.

The biggest issue going on here for me is the cognitive dissonance between the character Joan Crawford is portraying on the screen and the reality of her relationship with her children. Mildred is a woman who will do anything to win the love of her daughter, a miserable and nasty person, while from many reports (most notably from Crawford’s daughter Christina), the exact opposite was the case. Personal life shouldn’t necessarily intrude on art, and I try to keep the two separate, but in this case, it’s really difficult.

My complaint is that it does get a little schmaltzy toward the end. Mildred is perhaps too perfect, too self-sacrificing, too giving of herself to everyone around her, particularly Veda, to be believed. I don’t doubt that mothers like this exist—I just find Mildred’s success in the restaurant business both as a paean to her love for Veda and Veda’s rejection of same to be overwhelmingly difficult to swallow. Good movie, but I’m not sure how well it translates to today.

On a completely unrelated note, these are films 99 and 100 from the original list, 100 and 101 overall. It's not quite 10% of the complete list, but I have finally hit triple digits, and I'm back to averaging a film per day.

Why to watch Murder, My Sweet: Snappy patter and a plot that can just be followed.
Why not to watch: You need it to be Bogart instead of anyone else in the role of Marlowe.

Why to watch Mildred Pierce: It’s noir-lite.
Why not to watch: An intense desire slap the hell out of Veda and the cognitive dissonance of Joan Crawford as a mother who cares about her children.
Posted by SJHoneywell at 10:33 PM