A Bicycle Built for None

Film: Le Gamin au Velo (The Kid with a Bike)
Format: Video from The Magic Flashdrive on laptop. 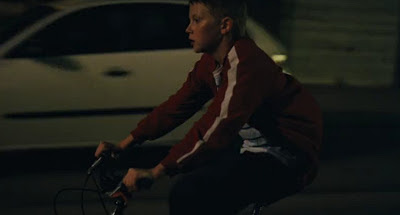 Watching a lot of films causes some constant reevaluation. For instance, when I started this blog, I was convinced that Bobby, the kid from the original The Day the Earth Stood Still was easily the stupidest kid I’d ever seen in a film. Well, I’ve now seen Le Gamin au Velo (The Kid with a Bike), and thus the reevaluation. For the opening scenes, Cyril (Thomas Doret) eclipses Bobby in the stupid department, and also manages to be quite the little shit. As the film progresses, he doesn’t get much smarter or less shitty, either. Strap in, because he’s in almost every frame.

Cyril is a troubled child. Some of this comes from the fact that he is absolutely rock stupid. Actually, that may be unfair. It’s entirely possible that the kid is brutally stupid, and just as possible that he’s merely stubborn and unteachable to a psychotic degree. He’s been trying to reconnect with his father for a month, and it’s soon evident that his father has abandoned him at an orphanage. This doesn’t stop Cyril from running away to his dad’s former apartment and trying to break in or repeatedly calling the now-disconnected number over and over. He claims he just wants his bike back. At one point, Cyril searches for sanctuary in a doctor’s office and clutches onto a woman named Samantha (Cecile de France) waiting there. Eventually, he’s shown into the empty apartment, allowing him to discover that his father is gone, as is his bicycle.

Samantha is ridiculously decent, though, and arrives at the orphanage the next day, claiming to have discovered Cyril’s bicycle and purchased it from the person who had it. It turns out that she did, and Cyril claims that it must have been stolen. He essentially demands that Samantha come rescue him on weekends, in no small part because she lives in the same neighborhood that his father did. It’s on one of these weekends, with Cyril going around looking for any trace of his dad, that he discovers an ad posted by his father offering the bike for sale.

Eventually, Samantha and Cyril track down the father, Guy (Jeremie Renier, who is not quite Jeremy Renner). As was obvious to pretty much everyone but the cement-brained Cyril, Guy has washed his hands of his son and is starting over without the boy in tow. Samantha makes Guy tell him this, and thus Cyril spirals into a depression, which manifests in him trying to hurt himself, a course of action I heartily endorse.

Now adrift and finding Samantha not enough to satisfy his needs of family, Cyril falls under the sway of a local criminal (Egon di Mateo) and begins something like a life of crime. How he’s recruited is actually pretty ingenious. One member of the gang steals his bike and stays just enough in sight to bring Cyril in to make him an offer. The gang names him Pitbull because of his habit of biting his opponents. Eventually, Cyril robs a local newsstand (using a baseball bat!), but is likely identified, which means that the gang no longer wants anything to do with him. The rest of the film comes down to fixing Cyril’s new criminal problem and Samantha’s care of him.

To my knowledge, my only other experience with the Dardenne brothers is Rosetta, which has some thematic similarity to Le Gamin au VeloIn both cases, the main character is obsessed with something he or she cannot have. In Rosetta, the character wants nothing more than the ability to break away from her life and is confounded at every turn. In Le Gamin au Velo, Cyril wants his father, but can’t have him. In truth, he wants something that resembles a family, but is too stupid to understand that what he has with Samantha is better than he had and better than a lot of kids ever have. Additionally, in both films, I find the main character personally repellent. I had less of a problem with Rosetta because it was simultaneously fascinating. While I disliked Rosetta herself, I completely understood where she was coming from and why she acted the way she did.

This is not the case with this film. Cyril is simply a stupid, stubborn little asshole. There’s nothing about this kid that comes close to a redeeming quality. Certainly his quest to reclaim his father is understandable, and in some ways, I sympathize with the fact that his father is a complete prick, but the kid is so unlikeable that I have difficulty wanting anything positive to happen for him. With Rosetta, there was a sense that if she could break away from her life she might blossom into something more. It was her situation that made her who she was. With Cyril, he’s too dumb to figure out that the situation he wants is right in front of him, so he screws everything up. It’s hard to be sympathetic.

The issue here is that Le Gamin au Velo is well made and well-acted. I can’t find fault with it other than the fact that I genuinely dislike this stupid kid. Perhaps if he weren’t so aggressively stupid I would feel sorry for him, but I have a blindspot when it comes to pathos for the willfully ignorant, and Cyril is that all over. In fact, I’m not even really sure I buy the fact that Samantha would foster this kid. We get very little in terms of her motivation, and a few minutes spent on her would do wonders for making everything fit into place better. She even pitches her boyfriend when he gives her the “him or me” ultimatum, and I’m still not sure why. When asked directly, she says she doesn’t know.

Am I being too hard on this kid? He uses a baseball bat to attack two people. Even a kid living in a orphanage can figure out that this is probably not a nice thing to do.

Why to watch Le Gamin au Velo: Because there’s pathos and tragedy when it comes to orphans and orphan-equivalents.
Why not to watch: The eponymous kid is stupid and an asshole.