What's in Your Drink? 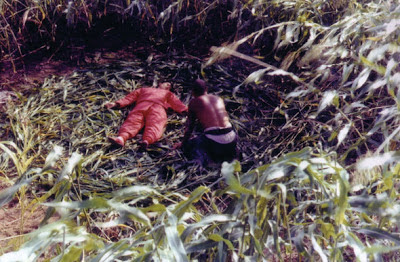 So, the first question I had to answer for myself when embarking on Hong Gao Liang (Red Sorghum) is what the bloody hell sorghum is. Evidently, it’s a grain. I sort of knew that, and also sort of knew that it is used to make something like molasses. I’m pretty sure I’ve had sorghum, although that doesn’t mean I know what it is. Anyway, it’s frequently used in the production of liquor, and that’s going to be important for today’s film. Sorghum alcohol is going to, in fact, be central to the narrative.

With that out of the way, it’s time to address the film itself, and let me tell you, it’s a strange one. The entire film is told as a story of the past, narrated by the grandson of Jiu’er (Li Gong), a woman forced into marriage with the leprous (literally) owner of a distillery. She is walked to her wedding day in a sedan chair, and the carriers and musicians are set upon by a bandit. The bandit is stopped, and Jiu’er shares a few sidelong, meaningful glances with one of the sedan chair carriers (Wen Jiang). The marriage happens, and three days later, as per tradition, Jiu’er returns to her parents for a visit. Along the way, she encounters a man dressed like the bandit. It turns out to be the chair porter again, and the two have sex, a fact that leads directly to the birth of the narrator’s father.

In the meanwhile, the leper/owner of the distillery/Jiu’er’s husband is mysteriously murdered, making her a widow. She convinces the workers at the distillery to stay, telling them that if they can make the liquor and earn a profit, she will happily share it with them. Her erstwhile lover returns and makes a fool of himself, and she is kidnapped by bandits, but keeps herself (relatively) pure by telling them that she actually slept with the leper. Her workers pay her ransom and she returns, and the sorghum liquor is created.

But that can’t be the end of it. The porter returns and (here it comes) pees in the vats of alcohol. However, this seemingly makes the liquor even better, and human urine becomes the new secret ingredient of the red sorghum hooch. And here’s the thing I don’t get—everyone watches him do this and no one tries to stop him. They just stand there while he walks down a line of liquor jugs and pisses into them. Absolutely gobsmacking, that. Maybe they’d rather drink their pee than risk getting it on their clothing. This event also causes Jiu’er’s head distiller to leave her eventually.

And then we take a hard turn, because suddenly the Japanese invade and it’s the rape of Manchuria, and it comes to the distillery. The soldiers force the destruction of the sorghum fields and commit a variety of pretty awful atrocities that are told to us by the narrator. Eventually, the distillery workers fight back, leading to the end of the film.

Because things simply happen here as a matter of course, this feels much less like a narrative than it does like life. The arrival of the Japanese, for instance, doesn’t fulfill a plot device, but happens because it really happened in China in the 1930s. It also lends the film an episodic feel, like it is a series of vignettes that happen to have the same characters in them rather than a completely cohesive film. It works, almost in spite of itself.

At the same time, because it is a film that essentially lacks a narrative structure, it’s almost more difficult to stay interested in it. I freely admit that I walked away from this film several times at moments when the story changed dramatically. Essentially, it felt like three half hour episodes of a dramatic Chinese television show.

In the interests of full disclosure, I should let the more squeamish among this readership know that there are scenes of the butchering of animals just past the hour mark. If you’re not ready to see an animal get skinned and then have the bloody pelt placed on the hood of a truck, still red and dripping with gore, there will be times when this film is difficult to watch. Of course, real atrocities (similar ones, in fact) are going to be granted on people in this film, but reality is that many people have a harder time seeing something upsetting done to an animal than they do with something done to a person.

As a matter of fact, the last 25 minutes here are pretty brutal. Of course, this is exactly what Zhang Yimou intended. After all, the cruelty of nature (and the skinning of a dead animal) doesn’t hold a candle to the capacity for human cruelty.

I should mention the kid, who is ultimately the narrator’s father. It’s the sort of thing that one can’t help but mention. He spends his time in the film (the last half hour or so) wearing only a shirt. I mean he’s got a shirt on but is otherwise completely bare-assed. It’s just so damned odd.

At the end, I’m not sure if I can say that I genuinely liked Hong Gao Liang, but it’s an easy film to admire. Once again, it feels like a film that would contain more meaning for me if I was more familiar with the culture it comes from, but as an extremely white Westerner, I’m less attuned to Chinese culture and symbolism. I also can’t say I’m desperate to taste sorghum-pee booze.

Why to watch Hong Gao Liang: A story told in actions and pictures more than in words.
Why not to watch: The liquor’s secret ingredient.