Film: Shadow of a Doubt
Format: DVD from NetFlix on laptop. 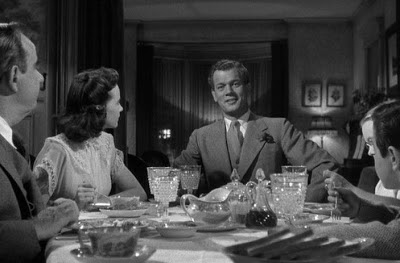 Alfred Hitchcock got his reputation for a reason. If you asked me to point to one of his early films that really cemented that reputation, I wouldn’t go with Strangers on a Train or The 39 Steps or Rebecca, but with Shadow of a Doubt. While there’s no question that he was making thrillers before 1943, Shadow of a Doubt is one of his best early films, and the biggest reason for this is the acting skills of one Joseph Cotten.

With Shadow of a Doubt, Hitchcock delves into the world of small-town family life, making this film sort of a Blue Velvet for the black-and-white, World War II set. A fairly typical family receives word that the brother of the mom is coming in town for a visit. Seems harmless, right? But this is Hitchcock, so we’re going to go somewhere dark and dangerous very quickly.

The brother, Charles (Joseph Cotten), is an unspecified businessman with a privacy streak a mile wide. His namesake, his niece Charlie (Teresa Wright) is excited to see him since he had been away for quite a long time. There’s a strange vibe centering around Charles, though, as if he is very much protecting some information. In fact, on the first evening of his arrival, he appears to discover something upsetting in the newspaper. In fact, he goes to extremes to remove an entire page and then tearing out a particular article.

Around the same time, two men (Macdonald Carey and Wallace Ford) appear, claiming to represent a government survey. They want to take pictures of the family and interview everyone. As it turns out, these are the same men we saw hanging around outside Charles’s apartment at the start of the film. Charlie goes out with one of them and he tells her that he’s actually a detective in pursuit of a man. Charlie checks out the missing story from the newspaper by running to the library. The story concerns a man wanted for strangling three wealthy widows, dubbed by the papers as the “Merry Widow Murderer.”

And immediately, Charlie puts all of the pieces together, and they rather tragically all fit. On his arrival, Charles gave her a ring that was already inscribed, and the inscription matches the name of the last woman that was killed. It fits with his apparent pathological fear of being photographed. The fact that Charles has shown up with $40,000 in cash—a sizable sum in 1943—fits in with the deaths of wealthy widows. And then it all locks into place when Charles effectively admits everything to Charlie and asks for her help just as the heat really starts to close in on him.

There’s a lot to love in Shadow of a Doubt, starting with Joseph Cotten, who should be far more remembered than he is. Teresa Wright (who had won an Oscar the previous year for Mrs. Miniver) is equally convincing in her role here as a girl who knows a terrible truth and doesn’t want to face up to what it truly implies. The father of the family is played by Henry Travers, best known as Clarence the angel from It’s a Wonderful Life, and he plays a more terrestrial version of the same character here—a bit scatterbrained but sort of entertaining at the same time. One of the more interesting little side stories here is his relationship with his friend Herb (Hume Cronyn). The two are dedicated to detective stories and dream up interesting ways to kill each other without getting caught. Amusing at first, this takes a much more morbid turn once Charlie knows the truth behind her uncle’s activities. The rest of the family, mother (Patricia Collinge), precocious daughter Ann (Edna May Wonacott), and youngest child Roger (Charles Bates) are essentially ciphers.

While the overall plot is the stuff of pure classic Hitchcock, there are a few speed bumps in the road, and they mainly come in the character of Charles. For someone who has successfully seduced and murdered a trio of widows (this really isn’t a spoiler), he’s remarkably careless. At one point, he goes into a speech about how such women deserve the slaughter that eventually comes to them. In fact, he brings suspicion on himself. There’d be no reason to suspect him of anything initially in Charlie’s case if he didn’t make such a big deal of removing a part of the newspaper and tearing out an article from it.

Still and all, it’s evident that Hitchcock was well on his way to earning the title of Master of Suspense with this film. It is superbly acted by the principle characters, tense and smart. Hitchcock was also smart enough to throw in downbeat endings in enough of his movies to keep an audience constantly guessing as to how things would turn out—and I will not reveal the ending here. Shadow of a Doubt was the film that Hitchcock claimed as his favorite of his own films, and while I certainly prefer others, I see why this one belongs in the pantheon.

Why to watch Shadow of a Doubt: It’s one of the reasons Hitchcock has the reputation he does.
Why not to watch: Say it ain’t so, Joe Cotten!

Email ThisBlogThis!Share to TwitterShare to FacebookShare to Pinterest
Labels: Alfred Hitchcock, Shadow of a Doubt, thriller