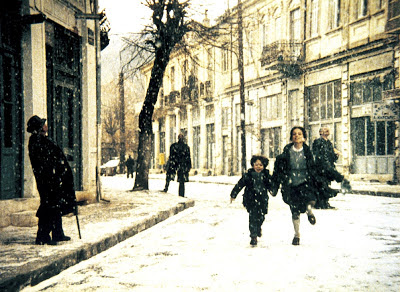 There isn’t always particular rhyme or reason to the films I pick on a given day or in a given week. If I do a double- or triple-feature, I match films in some way, but otherwise, I tend to watch what I’m in a mood for, or based on tackling something that I know will be difficult when I have the time and inclination. With harder to find films, it’s been more or less on an as-available basis. Thanks to Chip Lary at Tips from Chip, I have access to almost all of the remaining difficult films with one or two exceptions. That, more than anything, caused the viewing of Topio Stin Omichli (Landscapes in the Mist) today. It’s not available on disc, and I have no idea when NetFlix will decide to drop it from the streaming queue. So, just to make sure I didn’t miss it, I watched it today.

The basic plot of the film is disturbingly simple. Two Greek children are under the impression that their father is in Germany and wish to see him. They run away by train, traveling through Greece and Europe in an effort to discover if he is there. Along the way, both good and bad things happen to them. That’s pretty much it for slightly more than two hours.

The ages of the two children are not given. The boy, Alexandros (Michalis Zeke) is very young; I put him at around six. His sister Voula (Tania Palaiologou) is older, but almost impossible to place in terms of age. Her face puts her just pre-teen or in her early teens, but she is really short for that age. I can’t tell what age she is, and this becomes important at one point in the film, although only slightly in terms of how disturbing one part is. Having said that, my guess is you can probably guess something that happens to Voula.

The most important encounter is with a group of traveling actors, an event that harkens back to director Theodoros Angelopolous’s earlier film Traveling Players. This group is led by a young man named Orestis (Stratos Tzortzoglou), who takes a paternal view of these two lost children and decides to take care of them as much as he can. A good portion of the film involves the two kids being separated one at a time or jointly from their ad hoc protector.

The other significant event is what is hinted at above. During a ferocious rainstorm, the kids get a ride from a truck driver who eventually molests Voula. Happily, this isn’t really shown, but there’s no question that this is what happens. I hate to say it, but I knew it was going to happen the moment they got into the guy’s truck. I was simply waiting for the moment when it would. It all goes back to the same thing that I’ve railed against for some time—girls in movies can only come of age through sex, or more appropriately, through coming to terms with their ability to create new life.

There are a number of startling and beautiful images in this film that are, at least as closely as I can tell, the main reason that this film showed up on The List in the first place. The most noteworthy is the giant stone hand that is pulled out of the ocean and flown away by helicopter. It’s a gorgeous image—this broken but still beautiful piece of statuary seemingly weightless and drifting over a distant city as if the disembodied hand of God is reaching down to the world below. It’s an image that stays with the viewer for some time, as it is both haunting and beautiful.

Throughout, the film is marked by episodes of this trip of the children. None, or at least few of these episodes are connected to any other. Alexandros wanders away and begs for food only to be serenaded by a violin player. They walk. They ride in trains. Voula composes letters to their father. She develops a non-requited crush on Orestis, who becomes painfully aware of this.

Eventually, the kids reach the border to Germany, but are unable to cross because they do not have passports. What stands between them and the land of their goal is a river that they must find a way to ford. What happens is a call back to an earlier scene, but really requires a spoiler tag to discuss properly.

In the middle of the film, Orestis shows the kids a scrap of film that is essentially blank. He claims that if they look hard enough at it, they will see a tree in the mists that the film depicts. When they reach the other side of the river, this same landscape appears before them. It is shrouded in deep fog. Slowly, the fog burns away, revealing a single tree on a hill.

This is all well and good, but this is not a happy ending. The border into Germany is patrolled. Based on where the kids were coming from and when the film was made, it’s a good bet they managed to arrive in East Germany. As they cross the river in a boat, a searchlight spots them periodically. A guard yells out and we hear a shot before the scene changes to the mists and the lone tree. So what happened? I think they are killed crossing the border, particularly because Alexandros appears to be able to make the mists disperse by simply commanding it

What is to be taken away from Topio Stin Omichli? Breathtaking images if nothing else. Don’t look for plot or even much in terms of story or character development. Watch instead for the surprising beauty. And try not to jump out of your seat when it ends abruptly in the middle of a trailing note on the soundtrack.

Why to watch Topio Stin Omichli: Few images are as pretty as that flying hand.
Why not to watch: Contemplate the ending too much, and you’ll really wish you hadn’t.