Film: Utu
Format: Video from The Magic Flashdrive on laptop.

I promised at the start of the month that I’d be hitting some rarities this month, and so there’s no time like the present. This is the first test of what I’m calling “The Magic Flashdrive,” a collection of films sent to me on a surprisingly inexpensive and beefy drive from Chip Lary over at Tips from Chip. The man has connections, and more importantly to my personal quest, he has access to a crapload of films that are really hard to find. 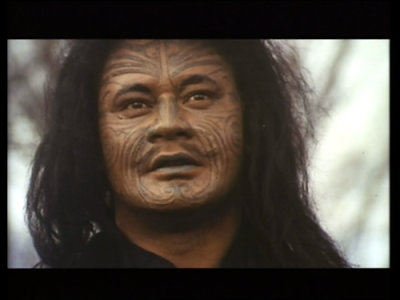 I took as my initial test of these films Utu, a New Zealand film that is sort of a fictionalized version of a native uprising. There’s a disclaimer at the start of the film that says that it’s not supposed to bear any relationship to people living or dead…but a couple of minutes of research will show that that’s a pretty disingenuous statement. The film is based on Te Kooti’s War, a conflict between European settlers in New Zealand and the native Maori.

And that’s pretty much what happens here. Te Wheke (Anzac Wallace) is a soldier in the military of the Europeans in the 1870s or so. When an attack by this military, seemingly at random, destroys many people he knows and loves, he rebels, has his face tattooed, and begins a rebellion. He does this in some pretty startling ways, such as breaking into a church, hanging the guard with the bell rope, and then hacking off the head of the preacher and standing in the pulpit with the head and preaching his own sermon.

The rest of the film concerns this rebellion, splitting time between Te Wheke (pronounced te-VEH-keh) and the military. In the military, we have our own little conflict going on. Lieutenant Scott (Kelly Johnson) wants to fight the Maori with commando tactics. His commanding officer, Colonel Elliot (Tim Elliott) prefers more standard tactics. Additionally, a man named Williamson (Bruno Lawrence) has joined up because Te Wheke killed his wife. Finally, Wiremu (Wi Kuki Kaa), a Maori, works with the military and seems to know more than he says.

Complicating the mix—there are always complications, of course—is Kura (Tania Bristowe). Kura is a Maori, but begins a relationship with Lieutenant Scott, the result of which is the culmination of the film. Really, though, the film focuses on the Maori rebellion and the battles between the military and Te Wheke.

So let’s discuss what the film gets right, and it gets quite a bit right. First, and most important, is the moral ambiguity. It’s easy in a film like this to portray the beleaguered, oppressed natives as somehow noble and above reproach—you need look no further than Dances with Wolves or Avatar to see something of this nature. Utu, though, goes on a different path. Instead, we aren’t given Te Wheke as some sort of noble savage or even a noble warrior, but as a man with a huge streak of cruelty and violence that is extremely unsettling. He’s capable of terrible acts, as are his followers. The assault on the Williamson home results in a complete destruction of the place—the woman dead, everything smashed. Te Wheke is a figure of fear to the colonists, and rightfully so.

It also gets the anger right. While Te Wheke is hardly blameless in everything that happens (hacking off a man’s head in front of a stunned congregation isn’t something you can just do and then walk away from), the colonists act like, well, colonists. The Maori are oppressed in no small part because they aren’t white. In one scene, for instance, a Maori soldier leaves to go join Te Wheke. Wiremu hands him something to read, but the man is unable to read and storms off. Why can’t he read? Because he’s Maori, and educating the native people is obviously not much of a priority. Why educate them? They’re savages, right?

For me, though, the whole thing comes down to the haka. Hakas are traditional Maori dances used for a number of reasons, one of which being war. There’s a haka scene here, with the Maori stomping, posturing, slapping themselves, and sticking out their tongues. It’s awesome. In fact, it’s also a part of Anzac Wallace’s performance. When attacking, he frequently pulls strange and contorted faces reminiscent of the haka, a way to make himself more terrifying in battle. This is good stuff.

The romance, though, is weak and unnecessary. It’s shoehorned in to the last part of the film and used as a motivating factor for the end, but it feels like an addition made to please a test audience. The film would work almost exactly the same and just as well without it.

In the end, though, I rather enjoyed Utu. It reminded me a lot of the Australian film The Chant of Jimmie Blacksmith, which further reminded me of Richard Wright’s “Native Son.” You could have worse things to remind me of, really.

Why to watch Utu: Because you need to see a haka.
Why not to watch: No surprises at the ending.