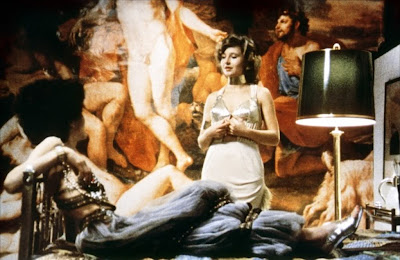 This is going to be…interesting. I’m not exactly sure what I’m going to say about Fassbinder’s Die Bitteren Traned der Petra von Kant (The Bitter Tears of Petra von Kant) aside from the following statement: this is the best boring movie I have seen in a long time. Fassbinder is an interesting director, and he gives us a lot to look at in this one, but there’s not much happening for the bulk of it. We don’t hit Jeanne Dielmann levels of dull, but there’s a lot of static shots of people standing around. At times, it put me in mind of Last Year at Marienbad, and this is never a good thing.

Our title character (Margit Carstensen) is allegedly a very successful fashion designer. She lives in Bremen with a servant/slave named Marlene (Irm Hermann), who never talks. Petra is abusive and cruel to Marlene, and it’s soon evident that this is a pretty co-dependent relationship. She is visited by her cousin Sidonie (Katrin Schaake), and the two talk about their relationships, and in Petra’s case, what went wrong in both of her marriages. Soon, a friend of Sidonie’s named Karin (Hanna Schygulla) arrives, and Petra is immediately smitten. She offers to turn Karin into a model, and Karin accepts.

Much of the film is the meeting between Petra and Karin, and then a similar scene taking place months later. Petra is completely smitten with Karin and attempts to find some place of common ground between them that she can exploit to make Karin fall for her. She can’t find much to work with, though, because Karin is…I’m not sure. She’s not particularly stupid, but she doesn’t seem to know or care about anything. Perhaps the best way to phrase it is that she is intellectually lazy. She doesn’t want to think or really do anything. We learn that she is young and married, but that her husband is in Australia. Petra invites her to move in with her.

We skip ahead six months. Petra’s relationship with Karin reflects the relationship she has weiht Marlene. While Petra is still abusive of Marlene, she puts up with every whim of Karin, who claims to have spent the night with a man. Then, worse for Petra, Karin’s husband calls and says he is in town, and Karin leaves, an action that crushes Petra emotionally.

The end of the film features Petra’s birthday and her complete breakdown into jealousy and emotional misery. She alienates everyone around her—Sidonie, her mother, her daughter—and spirals into drunken madness because Karin has gone away and not even bothered to call.

And that’s pretty much it. There certainly is enough here to make a film, but Fassbinder does the whole thing in five or six scenes, and we never leave the set of Petra’s lavish bedroom. We don’t see other rooms in the house—we just get different angles of the single room we’re allowed to see. (Actually, there are a couple of times we get glimpses into other parts of the house, but they aren’t much.) Fassbinder holds his camera steady for a few very long takes where little happens except for some conversation. It’s really dull. There’s endless dialogue about how much Petra loves Karin and Karin’s nonchalance about this. And there’s a lot of frenzied, emotional freaking out.

And yet there’s a lot to see. Fassbinder is smart with his camera. When Karin mentions that she is leaving to be with her husband, we get a shot specifically from a staircase bannister. Petra is lying on her bed, and she appears below the bannister, almost as if she is in a coffin. This makes sense, since she is “dying” emotionally in the scene. Karin stands behind her, visible above the bannister; she’s still alive and living her life. Similarly, Petra’s bedroom is dominated by a huge reproduction mural featuring half-clad and naked men. Frequently, the two women talk directly in front of the mural, often right in front of the nude man’s groin. Despite this film being in large part about Petra’s love for Karin, they are still being watched over by, well, a phallus that frequently points right at them.

And so, there is a great deal here that is worth seeing. The costuming is elaborate in places and seems to fit the sort of personality we are led to believe exists in Petra. But it’s also spare, with very little music coming in at any time. The film instead relies on ambient noise like the sound of Marlene typing furiously while Karin and Petra talk.

This is not an easy film to recommend, and I’m not sure that I recommend it that seriously. Fans of the artistic side of the cinema will find a great deal here to look at, probably in preference for the paper-thin story. Sometimes, that’s enough. I’m not yet sure if that’s enough for me, and I suspect it probably isn’t. The art crowd will love it for its unique look and beautiful shots, but the rest of us, including me, will be bored by it from the get-go.

Why to watch Die Bitteren Tranen der Petra von Kant: It’s art directed to Hell and back.
Why not to watch: Nothing happens.