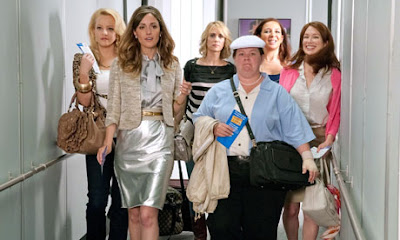 There are times when I suspect I’m humor-impaired. I mean, I think I have a pretty good sense of humor in general. I laugh at all sorts of things. I make a lot of jokes. If you listen to The Demented Podcast, I laugh all the time on it. There are tons and tons of things I find incredibly funny in the world. However, a lot of movie comedies just fall flat with me. I don’t think they’re funny, I don’t like the characters, and I barely crack a smile. I had hopes for Bridesmaids going in, but only slight hopes. Mainstream comedies have the same, basic stock characters in general and don’t tend to veer too much from the formula. With Bridesmaids, I don’t know if I’m seeing it that way because I expected to or because that’s how it is. Regardless, that’s how it is.

Bridesmaids was billed in a lot of respects as a female version of The Hangover. It’s not, although it plays on the same clichés. Men, in comedies, are motivated by pleasure, sex mainly, but pleasure in general. Men are little more than boys who can’t resist an impulse in Hollywood comedies. Women, on the other hand, are motivated by jealousy and more specifically, by jealousy of each other. So guess what the motivating factor of our main character Annie (Kristen Wiig) and her rival Helen (Rose Byrne) is. Did you guess “jealousy”? Wow, you’re good at this.

I’m not going to spend a lot of time going into the details of this film. Instead, I’m going to sum it up quickly. Annie is the owner of a failed business and is unable to maintain a relationship of any substance. Her best friend from childhood, Lillian (Maya Rudolph), gets engaged to a rich guy and asks Annie to be her maid of honor. Unfortunately, Lillian’s fiancé’s boss’s wife (follow that?) Helen is insanely jealous of the friendship between Annie and Lillian and has the money to essentially take over the wedding and ruin everything for Annie even further. And, of course, Annie is jealous of Helen’s life and money and somewhat jealous of Lillian’s relationship and it all comes out in mountains of bad behavior. But, it’s a comedy and not a very dark one, so it’s all going to come out fine in the end.

And that’s really where I am with this. It’s two hours and five minutes of bad behavior. I don’t buy the ending, I don’t like the characters, and I honestly resented having to spend this much time watching them self-destruct.

But not really. It’s a movie, and a comedy, which means that such conversations are intensified and buried in quirkiness. All of these characters are, like comedy film characters, caricatures who could not exist outside of a film. Nobody has the kinds of wacky escapades that are gotten up to here outside of something on a film. I mean, Annie, who hates flying, is fed a drug cocktain and starts to hallucinate, forcing the plane down. Has bad behavior happened on a plane before? Yes. But in a film, you can almost guarantee that something like that will happen, because the only way for a comedy film to sell itself is not to recreate the world, but to intensify it to an insane degree, and that’s certainly what’s happening here. It’s almost as if having everyday problems—the sort of problems that we well might experience when a best friend gets married or even when we discover that a best friend has other friends outside of us—aren’t “big” enough. So the filmmakers embellish and embellish and embellish and give us slapstick and vaudeville.

Really, I’m disappointed. I had hopes that this might not only break out of the “everybody is insanely quirky” mold that comedies fall into, but also might provide me with characters that didn’t fit into the cookie cutter molds. But all of these characters are stock, All of them (except, really, for Lillian) are a collection of idiosyncrasies rather than being people. And sure, there are parts of this film that are genuinely funny, but it’s not enough. The behavior here is a shade more ridiculous than reality television when it really just needs to be reality. The world is funny enough to sustain a real comedy that doesn’t take it to extremes. Sadly, this one wasn’t it.

Why to watch Bridesmaids: It’s funny if you go for that kind of thing.
Why not to watch: It’s also pretty insulting.