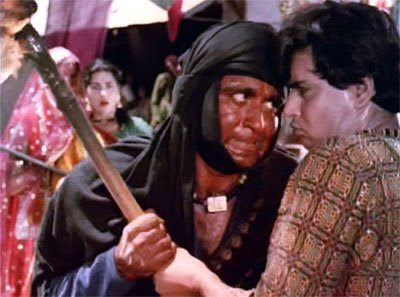 Oh, boy. If there’s a style of film that I really have trouble enjoying, melodrama is it. Sure, there are some good ones, but boy, when they are strident and obvious, there’s nothing else in the world quite like them. Bharat Mata (Mother India) is that sort of film. I was not precisely aware that “misery bonanza” was an actual genre of film, but having seen this, I’m sure that it’s a real thing. A number of reviews ago, I called Precious “a parfait of social and familial evils,” and let me tell you, that film has nothing on Bharat Mata.

In fact, it gets so that you’re wondering exactly what else can be thrown at this poor woman even before the film comes to the middle. This is a misery sundae topped with poverty sprinkles, a morass of bad luck and bad decisions, accidents, death, and pain that, I guess, is supposed to offer some sort of catharsis at the end, or at least teach us the meaning of perseverance. Seriously, Radha (Nargis) goes through things that would make Job shake his head in pity.

It starts with the marriage of Radha and Shamu (Raaj Kumar, and yes, don’t laugh). His mother had mortgaged the farm to pay for the wedding, borrowing money from Sukhilala (Kanhaiyalal), the wicked moneylender. He charges them a whopping 75% of their harvest every year as the interest on the loan, meaning that they’ll never be able to pay back a penny. Radha gets the brilliant idea of tilling the five fallow acres despite those acres being choked with weeds and stones. This kills off one of the family oxen, and later, while moving a huge stone, Shamu gets his arms crushed. Eventually, he runs off, never to be seen again. The mother-in-law dies soon after, then a freak storm destroys the family crop, killing her youngest child. Through all this, Radha is determined not to give in to Sukhilala and marry him, protesting that she is not for sale. Oh, and all of this misery happens in about half an hour, between the 45-minute and 1:15-minute mark. It just never stops.

Right when I was really thinking I couldn’t take much more of Radha and her two sons wallowing in the mud, we finally jump forward a number of years to a time when her boys are grown. Ramu (Rajendra Kumar) is the elder, and he follows very much in the footsteps of his mother, with the traditional morality. The younger son, Birju (Sunil Dutt), is terribly upset by the unfairness of the world, particularly his own poverty when compared with the tremendous wealth of the moneylender. This soon becomes something of a theme, with Birju (always outspoken, even as a child) constantly doing everything he can to attack the moneylender. Eventually, he becomes a bandit, causing his own brand of mischief and misery.

Of course, Bharat Mata is a Bollywood movie in the grandest tradition, which means that we get a song every 20 minutes or so. The version that I watched was fully subtitled except for the songs, which made this an interesting watch. About five minutes out of every 20 was people lipsynching words that obviously mean something, but I haven’t a clue what.

The issue I have with Bharat Mata is that I got the general sense of what it was and where it was going pretty quickly, but it still manages to take three hours to get there. It’s hard to say it’s inexpertly made, but it feels amateurish in many places. There are strange and sudden cuts, for instance, that may simply be a part of the film being older and missing some frames here and there. However, I don’t think that’s the case. It simply jumps from one scene to the next without so much as a warning.

A good percentage of this film is laden with overacting of the sort rarely seen on the stage. Birju in particular mopes and pulls faces like a petulant five-year-old even as a young man. It all comes across as so silly for a film that otherwise contains so much pain and misery.

The poverty and the constant misery through the first half of the film lends a particularly Soviet feel to this film. This is only highlighted by particular shots, like Radha shot from below, arm upraised in defiance of the fate that has been dealt to her, or clutching a clod of earth and kissing it and pressing it to her forehead. This is almost certainly by design, but it’s an odd cultural clash.

Ultimately, I was ready for this one to be over long before it was. I can understand that it may well be an important film for India, and perhaps even for world cinema, but I’m not unhappy that it’s done. There’s just too much. Certainly there is great spectacle here, like the burning of the hay bales and the pursuit of the now-fugitive Birju across the fields, but when this is paired up with endless close ups of Radha and Birju shouting for each other, it almost becomes comic. That, and I really wish I knew what the hell the songs were about. And really, I’ve had quite enough of people screaming “Birju! Birju!” in a high and strident voice to last me for the rest of my life.

Why to watch Bharat Mata: It’s considered one of the true classics of Bollywood cinema.
Why not to watch: It’s three hours of misery and bad things.