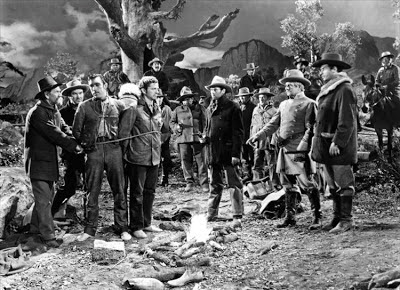 I don’t consider myself much of an expert when it comes to Westerns. I like a few and am neutral on a lot of others. I genuinely like The Ox-Bow Incident, though, because it’s a Western that doesn’t need to be one. This is a story that could just as easily play out in a number of other situations with a few minor tweaks and changes. It has some interesting parallels to another Henry Fonda classic, 12 Angry Men, but it takes a much darker turn. For all its horses and cattle and riding on the range, though, The Ox-Bow Incident is a morality play about mob justice and the regular part of the human condition that involves shooting first and aiming later.

As with many films that are a black-and-white morality tale, the story is simple. A small Western town is plagued with cattle rustling, which is naturally a problem for the various ranchers in the area. When one of the locals turns up murdered, though, things get serious. With the sheriff out of town, the deputy forms a posse to track down the killers. The posse contains many members of the town, but is effectively led by the bloodthirsty Farnley (Marc Lawrence) and “Major” Tetley (Frank Conroy). Going along for the ride are our main characters, Gil Carter (Henry Fonda) and Art Croft (Harry Morgan), in part to further quell any suspicion that they might be guilty of the rustling. Also along for the ride are Davies (Harry Davenport), who wants to see real justice done and Sparks (an uncredited Leigh Whipper), the self-taught African-American preacher who is there because he fears the results of unchecked “justice” at the hands of an emotional and unruly mob.

Of course, the posse finds three men out on the trail and immediately jumps to a conclusion of their guilt. Only a few on the trail act as voices of reason, Gil and Art being two of them. A surprising voice of reason comes in the form of Gerald Tetley (William Eythe), the son of Major Tetley. It’s evident there’s a great deal of tension between father and son because of Gerald’s perceived lack of masculinity. This is especially true in comparison to his father’s affectation of a Confederate officer, an affectation privately sneered at behind his back.

The Ox-Bow Incident offers surprising star power for a film this short. Our suspects, for instance, include Gerald Martin (Dana Andrews) and a Mexican gambler named Juan Martinez (Anthony Quinn). For a film this short and made so obviously on the cheap on studio sets instead of being filmed on location, there are a startling number of names in the cast.

What happens here is what is going to happen inevitably. Once the plot is put into motion, the end result is never really in doubt—only the various moves to get us to the conclusion are in question. Even with this, though, there’s still something of a shocker at the end, which is evidence of just how good the writing here is. I won’t say precisely what happens out on the trail or afterwards. That the last few minutes can still produce an unexpected ending is really remarkable.

Really, this is the point I’d like to make about The Ox-Bow Incident. This is a film that transcends its genre. The trappings of a Western are convenient more than anything else; it allows for the easy conceit of a posse and the idea of frontier justice in a time and place where the audience will easily accept it. But it is a much deeper film, offering ideas of the true cost of that justice and mob mentality. That it does so in a genre generally held in low regard by all by its adherents is remarkable. That it does so this well is more remarkable still.

This is not, of course, a perfect film. After the posse has ridden out, we get a short sequence where it catches up to a stagecoach. The point of this part of the film, evidently, is to get Art Croft shot in the shoulder for some reason and to give us a brief look at Rose Mapen (Mary Beth Hughes), the recently-married former flame of Gil Carter. These five minutes or so could easily be excised without much loss to the overall narrative here. The characters that pop up don’t come into play later on, and Art’s shoulder injury doesn’t play into the actual plot.

But this short scene is really the only negative here. Everything else is masterfully handled. For a film that takes place almost entirely outdoors, The Ox-Bow Incident is disturbingly claustrophobic. While we get some intimacy with characters thanks to tight camera shots, even here there is a sense of being constantly surrounded by a gang of angry people ready to take any excuse for an outbreak of violence.

When the topic of great Westerns comes up, I tend not to mention The Ox-Bow Incident, and I think that’s by design. It’s not that I don’t think of this as a great film, because I do. It’s more that I don’t think of it as a Western at its heart. It’s merely one out of needing a legitimate backdrop for the greater story being told.

It’s also worth noting that this film demonstrates that Harry Morgan wasn’t always 70 years old. Based on this film, there was a moment in time when he was more like 35, but then he moved right into being 70 for just about everything else he did. Henry Fonda plays the same character he almost always did—a noble person intent on doing the right thing for the right reasons and regardless of the cost. What this film makes evident is that the cost of doing the wrong thing might ultimately be much higher.

Even if you aren’t a fan of guys on horseback and six-shooters, you should make time in your schedule to watch this one.

Why to watch The Ox-Bow Incident: A morality tale that is still relevant.
Why not to watch: With a cast this good, 75 minutes isn’t nearly enough.