Some directors are noted for particular genres, and some become so closely tied to a genre that it becomes impossible to talk about the genre without discussing the director in question. With Westerns, that director is John Ford without question. The man is, was, and ever more shalt be an institution when it comes to the genre. Watch enough of his films, and it’s easy to see why the man is so revered. His films offer, despite being made in a golden time for Hollywood, a certain moral ambiguity a lot of the time. And there’s those great vistas. 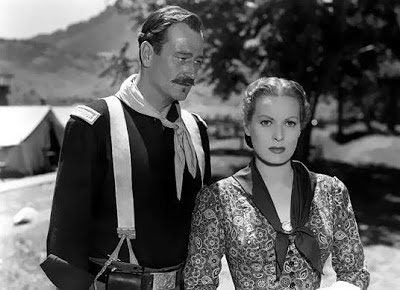 Anyway, Rio Grande came in the heart of his career. In addition to being a classic Western of the old school right around the time of the revival of the genre spurred by Winchester ‘73, the film is also a romance and a family genre. There are similarities in tis respect to The Lives of a Bengal Lancer, although fewer than might be expected on the surface. Regardless, Ford manages to keep a lot of plates spinning through this one, even if it doesn’t mesh perfectly at the end.

Colonel Kirby Yorke (John Wayne) is posted with his men in Texas to protect new settlers from the rampaging Apaches. He soon learns that his son Jeff (Claude Jarman, Jr.) has failed out of West Point and then immediately enlisted in the cavalry despite being too young. He learns this because Jeff has just been posted to his military group and is arriving in Texas. Colonel Yorke doesn’t wish to show favoritism to his son. The boy is taken under the wing of two other soldiers, Travis Tyree (Ben Johnson) and “Sandy” Boone (Harry Carey, Jr.). Things get more problematic when Yorke’s estranged wife shows up in an effort to bring Jeff back home. Kathleen Yorke (Maureen O’Hara) holds a grudge against her husband. She is very much the proper Southern woman, and her husband burned down the family plantation during the Civil War. She keeps an even bigger grudge against Sergeant Quincannon (Victor McLaglen), since he’s the one who set the torches a-blazing.

The problem that Colonel Yorke is mainly facing is that the Apache move across the Rio Grande/Rio Bravo with impunity. They strike at the American settlers, then retreat to Mexico, where the Americans cannot pursue. Despite the fact that they would like the authority to cross and the Mexican Army would like the help, the river remains an impenetrable border for both sides.

Tyree has his own problems. He’s accused of manslaughter, and rather than face the charges, he goes AWOL, stealing Colonel Yorke’s horse to make his escape. This seems like a subplot, but actually proves to be something important in the end (and something that drastically reduces the film’s ability to work effectively). The reason is that Tyree comes back eventually, but I’m getting ahead of the story. Everything comes to a head when Yorke is ordered into Mexico to pursue the Apache. At the same time, a wagonload of children moving to a different fort is captured. Yorke sends in the recently-returned Tyree, Boone, and his son in to rescue the kids, and naturally we end with a massive cavalry charge, because that’s what you paid your money for in a Western in 1950.

What this means is that Rio Grande has to work on a lot of different levels. On the one hand, it’s a military picture of the post-American Civil War and a Western thanks to the setting and the rampaging Apache. On a different hand, this is a romance, as Kirby and Kathleen Yorke rediscover their love for each other under these conditions. Additionally, it’s a family drama, as young Jeff asserts himself under his father’s leadership and out from under the thumb of his mother. Because of these various stories, none of them feels really complete, and each one gets short shrift.

Take, for instance, the romance. Kathleen and Kirby squabble a bit, but when the singers from the regiment come by and favor them with a song, it’s right back to the old times and a loving embrace. There’s no real tension between them past the first couple of minutes. Jeff’s standing up for himself against his mother takes a couple of minutes and then doesn’t really happen again.

The bigger problem, though, is the fate of Tyree. This is a man who was wanted for a crime, legally arrested, and then went AWOL with the mount of his commanding officer. And he’s given a plum assignment leading a rescue mission? It doesn’t make any sense. The man would, at that time, almost certainly be shot on sight, not given an assignment to carry out—and he’s put in charge of it, no less.

It’s worth noting that in the rescue, we come across Margaret Mary (Karolyn Grimes), a young girl who is somehow attached to Quincannon. It’s one of those Old Hollywood things that this girl is ridiculously stupid. The three men enter the church, and she essentially starts shouting at the top of her lungs about how glad she is to see them. I’m not sure if this is supposed to be comic relief or if we’re supposed to learn that the Apache are so stupid that they won’t investigate the noises coming from the area where they are keeping prisoners. My guess is comic relief, but it’s not that funny.

Additionally, there’s a great deal of footage sped up here to give an indication of greater speed. It never really works when someone speeds up the film. It always looks stilted and affected. It might work for something filming just cars, for instance, but the minute we have people in the picture, they immediately look false, and the speeding up of the film becomes obvious. Additionally, the sped-up shots go on too long, long after the action that needed the speed assistance, so they look even more ridiculous.

I don’t want to give the impression that I hated this film, because I didn’t. I simply didn’t love it as much as others of Ford’s Westerns. John Ford was a singular talent when it came to this genre, but Rio Grande pales in comparison to his other, far greater works.

Why to watch Rio Grande: Because John Ford did Westerns like no one else.
Why not to watch: Too much sped-up film, and the annoyance of Margaret Mary at the end.