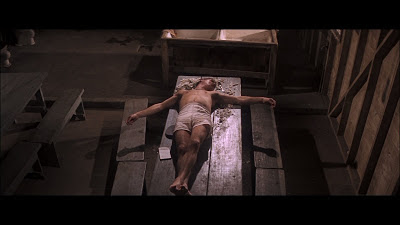 My brother-in-law Mike’s favorite film is Cool Hand Luke. At least it used to be. I’m honestly not sure if it still is, but it wouldn’t surprise me if he still claimed it as his favorite. Mike’s favorite thing to say about Cool Hand Luke is that the average temperature per scene is hotter than any other film ever made. Every scene is 100+ degrees. Sadly for Mike, Sunshine, which takes place in large part in close proximity to the sun probably eclipses that record just on the virtue of having a couple of scenes with temperatures in the millions. Still, I think his point might well stand. This movie involves a lot of sweating.

We are introduced to Luke (Paul Newman) when he is completely drunk and cutting the heads off parking meters. This gets him a two-year sentence on chain gang, where we’ll be spending most of the rest of our time. It is here that we meet the rest of the players. The other prisoners include Babalugats (Dennis Hopper), Tramp (Harry Dean Stanton), Koko (Lou Antonio), and Dragline (George Kennedy), who is very much the prisoner in charge of the gang. The key bosses here are Boss Godfrey (Morgan Woodward), better known as the Man With No Eyes and the Captain (Strother Martin). Luke learns quickly that he’s got no power in the chain gang but can’t stop his mouth from running.

Luke’s perverse need to poke at those in authority results in a fistfight between him and Dragline. Dragline pounds the living snot out of Luke, but Luke refuses to give up. He’s beat to within an inch of his life, but never quits. Later, while playing poker, he manages to bluff his way to winning a large pot, claiming that sometimes nothing is a cool hand. For this, he is given his chain gang name of Cool Hand Luke.

Luke pretty quickly establishes himself as something of an equal with Dragline and quickly becomes something of a hero to the other prisoners. This culminates in one of the highlight scenes. Luke claims he can eat 50 hard-boiled eggs in an hour. Everyone in the prison camp bets against him. Because of this, he and Dragline wind up with a monopoly on the money in the prison camp. Shortly after this, the film changes tone. Luke’s mother dies and he’s put into “the box” for a few days to prevent him from running and attending her funeral. Once he’s released, though, he does run. The rest of the film concerns Luke running and being recaptured, punished, and running again.

Cool Hand Luke is a fantastic film, mostly turning on some tremendous performances. George Kennedy was never better than in this film. Dragline is one of the most memorable characters from the 1960s. However, even Kennedy’s incredible performance is eclipsed by the one turned in from Paul Newman.

I’m just going to say it: I think Paul Newman’s turn as Luke might well be the single greatest acting performance I have ever seen. While there are multiple moments that show just how strong his performance is, nothing sells it to me like the few minutes after he has learned about the death of his mother (Jo van Fleet). He walks across the barracks, picks up a half-tuned banjo, and runs through a couple of verses of “Plastic Jesus.” While he does it, we can see his mind working. We know that this is a turning point for Luke. At first, this is more or less a tribute to his mother, complete with stops and starts and a solitary tear standing in one eye. Then, on the third verse, he picks up the pace and looks skyward, and from this moment forward, he’s going to start running and never stop. It’s a master class in performance. Watch it here.

The main theme through the film is a conflating of Luke with Christ, and there’s no doubt that he’s a Christ figure. We see this in the classic egg eating scene (he’s left on the table in the crucifix position), but it comes up throughout the film. His prison number is 37, and it’s no coincidence that Luke 1:37 reads “For nothing is impossible with God.” Returned to prison and given a massive amount of food that he must eat, Luke sits while the other prisoners walk past, each taking a spoonful of his food, essentially taking communion. He’s scourged at one point well past the breaking point. He even has a conversation with God near the end, essentially asking that this cup be taken from him.

All told, Cool Hand Luke is one of the great American films of the 1960s. But even with all of its memorable scenes and quotes (“What we got here is failure to communicate”), there is nothing so enduring in this film as Newman’s quiet, confident, and nearly constant smile.

If you’ve never seen this, do yourself a favor and see it soon.

Why to watch Cool Hand Luke: You need no more reason than Paul Newman.
Why not to watch: I’ve got nothing here.