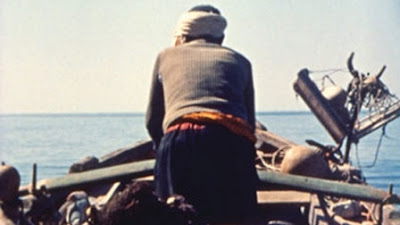 Frequent readers of this blog will note that I almost never refer to The Book when it comes to a review. The goal of each of these reviews is more or less to coalesce my own feelings and observations about a given film as well as I can. In rare instances, though, I’m so completely nonplussed by a film that I have no other option. Mediterranee is exactly that sort of situation. I watched this thing and I have nothing original to say about it, which is difficult, considering I have a review to write.

Sadly, The Book doesn’t have much to say about it, either. Seriously, essentially it says that this is a film that Godard found influential and that he really liked. Great. So evidently, Mediterranee made it here because someone heard that Godard liked it, and thus it makes it on. This is one of the reasons that I sometimes think that The List needs an enema.

Anyway, Mediterranee is a bunch of images of varying lengths that repeat over and over with a voiceover that seems to talk about nothing for some of the time. There may well be a point to some of this narration, but most of it comes across as existential foofrah. I can’t pull out a single exact quote, but most of the voiceover is along the lines of pseudo-mystical crap like “We find ourselves moving closer to answers.” Hold on—I’m going to load up one part of it and get an exact quote to better exemplify what I mean. Here you go: “The sensation of antiquity increases.” Yeah.

While all of this is going on, the images that pop up are of a bullfight, ancient statuary, a factory, a garden, a girl strapped to a hospital bed, and more. I can’t tell if I’m supposed to find some sort of connection between these various images or if they’re just there as a sort of backdrop for the I’m-supposed-to-be-impressed word salad that comes over the top. There might be a connection—the girl strapped to the bed and the bull, for instance, both offer an image of being trapped. But so what? Just about anybody could find a point of similarity between any two images, so finding places where there are places of common ground mean nothing.

And really, that’s about all I have to say about this film. This feels like terribly short shrift, considering that I’ve written more than twice as much about films a third as long, but I actually had something to say about those films. There is honestly nothing more to say about Mediterranee.

So instead, I’m going to rant for a paragraph or two just because I can. Films like this one really piss me off because there seems to be no point for it. But it’s more than that. It feels very much like the two directors are laughing at everyone who finds this thing to be meaningful and important, and like Godard is in on the joke for us stupid Philistines. Maybe it is meaningful, but that meaning is so opaque that it’s not worth trying to find and needs to be explained to The Great Unwashed like myself.

Fellow blogger and undisputed ruler of the 1001 Movies Blog Club, Squish Lessard made the most appropriate comment I can think of for a film like this one, although he made it about a different film. I’ll quote him and give him the last word on the 45 minutes or so I wasted today on this pile of tripe. "Some critics may read the program at the vernissage and say 'Aaaah! How interesting!' I put my hand up and say, 'Why didn't you explain that in the film? Couldn't you do it better, so I could understand it in the medium it's presented in? If I wanted to read, I'd pick up a book.'"

Why to watch Mediterranee: Because it’s on the list that you’re pursuing.
Why not to watch: There’s not much to see.