Tale as Old as Time 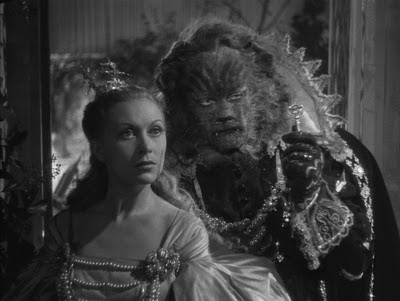 Say “Beauty and the Beast” to someone, and you’ll almost certainly get a response that reflects the Disney film of that name. that’s only natural, since that’s the most relevant thing of that name in most people’s heads, and has been for the last 20 years or so (yes, 20 years). What I didn’t know until tonight was that a great deal of the look and feel of the Disney film comes from the earlier incarnation, Jean Cocteau’s La Belle et la Bete (Beauty and the Beast), a black-and-white fantasy that probably sticks a little closer to the original fairy tale and doesn’t involve a singing teapot.

In this version, Belle (Josette Day) does her best Cinderella impression as the maid and servant for her two sisters, Felicie (Mila Parely) and Adelaide (Nane Germon). She also has a brother named Ludovic (Michel Auclair) and a father (Marcel Andre). The family is going through difficult times because the father lost a shipment of goods on the high seas. Belle is forced to work for her sisters, who are hoping to land a rich husband. But good news comes in—another shipment has arrived safely, and the family is saved. He promises lavish gifts to the two mean daughters while Belle asks for a simple rose. Meanwhile, the wastrel Ludovic promises to pay off his debts to a moneylender (Raoul Marco), promising that worthy that if he doesn’t pay, he can take all of his father’s possessions.

But tragedy strikes. All of the profit from the shipment is used to pay off outstanding debts, leaving the family ruined. On his way home, the father becomes lost in the forest and winds up at a magical castle where candelabras are held and wine is poured by disembodied arms. Upon leaving, he plucks a single rose from the garden as a gift for Belle. This causes the appearance of the Beast (Jean Marais), who sentences the man to death unless he can get one of his daughters to take his place. Belle, who has a good heart and feels guilty for asking for the rose, agrees to take his place.

What follows is a drastic change from the story most people are used to. Belle, while unable to leave the castle, has free reign of it, and the Beast is not a terror, but generally gentle and sweet. While she is repulsed by him at the start, Belle quickly begins to warm to him, and the two soon become closer. He’s sometimes ferocious when his more bestial side emerges, but he is cautious for this to happen away from her whenever possible. It’s not long before the two are good friends. The only problem between them is that every night he asks her to marry him and every night she refuses.

Eventually, she asks to be allowed to see her father again, and the Beast grants her permission to go for one week. He entrusts her with a golden key that safeguards all of his treasures and a magic glove that can transport her to anywhere she wishes to go. Of course, things will never be this simple. In addition to her scheming and wicked sisters and her greedy and stupid brother, she also has to contend with Avenant (also played by Jean Marais), a suitor who isn’t that bright and appears to be jealous of her new animal-like friend.

So let’s get into the guts of this. La Belle et la Bete is wonderfully imaginative and beautifully filmed throughout. Cocteau’s vision of the Beast’s castle, for instance, is undoubtedly the inspiration for the Disney film. Unable to produce hordes of animated helpers, Cocteau instead gives us arms sticking out from the walls, holding candelabras and gesturing. Doors open on their own accord and some objects speak essentially through voiceover. The effect is still pretty decent even though there’s no mystery as to how it was performed. The faces that peer out from the fireplace are quite disturbing, but are a fantastic touch.

Similarly, the sets are lavish, particularly that of the Beast’s castle. The period costumes, coming from a sort of fantasy past, are also spectacular and worth the price of admission in their own right. While there’s no mystery that there is a man under the Beast’s makeup, it’s also extremely good work.

While these aspects sell the picture, it’s the story that really makes people want to watch this. For the most part, it will be a pretty familiar one, although there is no Gaston, or Cogsworth, or Lumiere, or Mrs. Potts. The differences, making the Beast a gentle creature right away, certainly makes the love story that evolves between the two characters far more believable than the (honestly) abusive relationship the pair shares in their animated cousin.

Children will have a difficult time with this, in large part because of the subtitles, but also because it does deviate from the more familiar version in so many ways. Adults not too immersed in the Disney-fication of the story, though, will find a great deal here to be charmed by and a story that is in many ways more compelling than the one they know and probably love.

Why to watch La Belle et la Bete: Sets, costumes, and a story you know.
Why not to watch: The unfamiliar bits will feel out of place to the Disney-fied.

Posted by SJHoneywell at 6:41 PM