I have been avoiding the shortest films on the list for some time. There’s no particular reason for this other than the idea that watching the longest films means I feel like I’m taking care of the largest effort parts of the list first. Still, there’s a time and a place for knocking out the shorties, and with only a small handful of films left under an hour, today seemed like a good day to do it. Also, since a couple of those ultra-short films are difficult to locate, getting them done sooner rather than later seemed like a good idea. 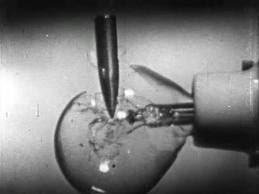 And so we have Report, a film by Bruce Conner about the assassination of John F. Kennedy. At a mere 13 minutes, this is hardly a comprehensive look at the events of November 22, 1963 and it’s not intended to be. In fact, I’m not really sure what it’s supposed to be. I’ve seen that there’s some analysis online (searching for rare films brings one to some interesting places), but rather than look there, it’s more interesting to try to parse this out for myself.

Report starts with the familiar scene from the Zapruder film of John and Jackie Kennedy riding in the convertible, smiling and waving to the crowd. Meanwhile, the sound we hear is the radio voice of an announcer discussing the events of the day, the parade route, and everything else. Then, suddenly, the screen goes black as the assassination takes place. For the next three minutes, we get an uninterrupted feed of the more and more harried announcer trying to figure out what has happened. The screen, meanwhile switches rapidly between black and white frames, making a strobe-like effect that should honestly come with an epilepsy warning.

What follows is frequent repetition, at least for the next few minutes. We see the same image of the Kennedys driving by and smiling, about a second or so of footage, over and over. While the announcer continues, we see leader footage counting down from 10 to 3 repeatedly. This lasts until about the 8-minute mark.

The final five-and-a-half minutes are mixtures of various pieces of stock footage: refrigerator ads, bullfighters, Kennedy himself, a bullet shooting through a light bulb, Oswald’s shooting. The audio here is from earlier in the day, the Kennedys coming into the airport and walking off the plane, the early parts of the parade. Conner uses this opportunity to juxtapose sound and image interestingly. For instance, we here the announcer saying that the Kennedys have made their appearance at the same moment that Conner shows us the flag-draped coffin of the president.

The overall effect of Report is not so much a detailed schedule of the events of the assassination (for a somewhat fictionalized version, see Oliver Stone’s JFK). Instead, it is more or less an emotional working through of the events of the day. What we see are simply images that may or may not have anything to do with the events of the day. Certainly there’s a parallel to be drawn between the death of John Kennedy and the slaughter of a bull during a bullfight. It’s more difficult to draw that parallel between the coverage of the assassination and the sale of appliances, but even there we might make the connection between selling a product and selling a narrative.

Regardless, what Conner didn’t do was to collect any archival footage from the days, weeks, and months following the investigation. He stayed with the events of the day as they unfolded and kept us with the announcer as he was experiencing the event in real time. Report, then, is not about the factual result of the assassination, but about the impact of the event on the public in the moments that it happened and immediately following.

I’m older than the typical movie blogger, something that is frequently pointed out to me. I am not, however, old enough to remember the Kennedy assassination, since it happened almost four years before I was born. I know quite a bit about it, though. I edited a book on it a few years ago. My honest opinion about the nature of the assassination is [---------------REDACTED---------------].

Why to watch Report: A seminal event in U.S. history from a unique perspective.
Why not to watch: The opening three minutes are very hard on the eyes.