Watching Oscar: The House of Rothschild

Film: The House of Rothschild
Format: Internet video on laptop. 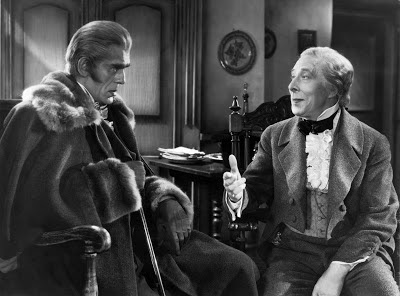 As this blog testifies, I watch a shit-ton of movies. I don’t review everything I watch, but I do review many of them. I average somewhere between six and ten films per week most weeks, and if I am not between those numbers, I’m usually on the high side. In the hundreds of films I watch every year, I see a lot of everything. I see the traditional stuff, I see monster films, I see experimental works that are as opaque to their meaning as a lead shield is to light. But it’s been some time since I’ve seen a film that so purely flummoxed me as to its intent as The House of Rothschild.

Seriously, I don’t know what the takeaway from this film is supposed to be. It plays, at least after the opening sequence, like a propaganda film for one of the wealthiest families in the world. But it also plays like a history of the Napoleonic times and the state of the Jewish people in Europe. But there’s also a romance shoehorned in here (of course), so there are aspects of that as well. And there’s some war going on throughout the film. And racism. With all of that, I don’t know what I’m supposed to be thinking by the end except that the Rothschild family took some risks that paid off, which has led to them being absolutely rolling in coin.

We start in the past in which Papa Rothschild (George Arliss) is a money lender in part because Jews are not allowed to learn a trade. This opening sequence is interesting, because I’m not sure what we’re supposed to think here. On the one hand, we see Rothschild as the epitome of the Jewish stereotype. He sits at a table absolutely covered in gold coins and still becomes agitated to an insane degree when it turns out that one of the coins is a fake. When the tax collector shows up, everyone in the house puts on old clothing and the real ledgers are hidden so that he can cry poor to the tax man. Again, this is made in a time where this would smack of “typical” Jewish moneygrubbing, and would also be seen as comic. Additionally, the same behavior in a Gentile would be seen in a far more positive light. Anyway, the scene ends with Mayer Rothschild losing a ton of money when it is stolen from him in transit. He gathers his sons and tells them each to start a bank in a different country in Europe, allowing them to lend money to each other without actually transferring it, a move that makes them the most powerful banking family in Europe.

We flash forward a number of years to Napoleon’s rise, and we see that this plan actually works. The various banks of the Rothschild family turn out to be the most significant money lenders in Europe, funding the various military ventures of the countries allied against Napoleon, funding the war effort and credited at least in London with defeating Bonaparte. And then comes the main struggle of the film. After the war, the powers decide to float a massive loan to France to put the country back on its feet. The Rothschilds, led by Nathan (George Arliss again) and the London branch offer to float the entire loan, but are denied. The main reason they are denied is due to the action of Count Ledrantz (Boris Karloff in about 30 pounds of cosmetics), who is an anti-Semite. Through manipulations of the market and at huge personal cost, Nathan Rothschild causes the loans to fall into serious jeopardy and steps in to “rescue” the bond issue, making a huge fortune for himself and his family. This, however, causes Ledrantz to fuel pogroms across Europe.

In the midst of all this, we have the story of Nathan’s daughter Julie (Loretta Young). She is madly in love with British officer Captain Fitzroy (Robert Young), but is denied her desire to wed because of her father’s fear of anti-Semitism and what will happen to her in “polite” society thanks to her Jewish heritage. And really, that’s the entire film.

As I said at the top, I have no idea how I’m supposed to react to this film. It seems like the entire thrust of the film is “Hooray for rich people,” and possibly “Jews all fit the stereotype, but they’re not as bad as all that.” It also seems like it may have been entirely funded by the Rothschild family itself, since the entire clan comes off not as the wealthiest family in Europe but as Europe’s most noble and selfless people as well. Throughout, we are told that the family’s desire is not to fund war but to fund peace, and that their actions are based entirely on their desire to uplift the Jewish community and achieve equality in Europe for Jews.

For all of its propaganda-like features, The House of Rothschild isn’t a bad film. It’s just a strange one that I’m not sure how to view. I also wonder precisely how this was considered one of the best films of 1934. Then again, there were a full dozen movies nominated for Best Picture from that year, so that might well account for some of it. But ultimately, this is a film in which the main dramatic action consists of carrier pigeons flying messages and money changing hands.

I should mention the carrier pigeons. The five Rothschild brothers communicate through carrier pigeon, which allows them to transfer information quickly across the continent. This is evidently high technology for the rest of Europe, because no one can figure out how these little slips of paper are getting from place to place so quickly. It’s like an entire community of people knowing that the internet exists and being surprised when a group of people communicate through email. Weird.

Why to watch The House of Rothschild: It’s interesting as history.
Why not to watch: It’s also basically a propaganda film for the filthy rich.