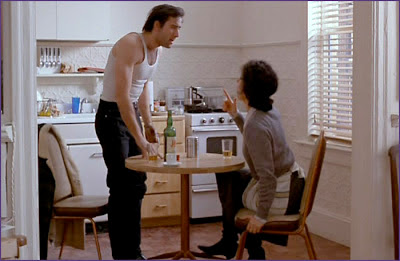 I have trouble buying Cher as a vocalist and I have issues with her fashion sense (or lack thereof), but I’ve never had an issue with her has an actor. Say what you will about her or give me as much grief as you like, but she’s got the chops. With Nicolas Cage, the response is a little different. Cage is certainly capable of throwing together a good performance and seems to do so every now and then. Sadly, he spends most of his time acting in garbage, though. Both Cher and Nicolas Cage have their share of camp value. So what do you get when you throw them together? Well, you get Moonstruck.

Now that I’ve seen Moonstruck, I wonder exactly why I had to see it before shuffling off this mortal coil. It’s certainly a well-made movie; I’m predisposed to like Norman Jewison. It’s beautifully cast throughout—I’m also predisposed to like Olympia Dukakis, John Mahoney, and Danny Aiello. While I can’t say that there’s anything really wrong or bad, I also can’t find anything that makes this film particularly special in any way.

Loretta Castorini (Cher) is a widow whose husband was killed when he was hit by a bus. In her world, this has happened because of bad luck, and the bad luck came from her not having a real wedding. Her father refused to pay for the wedding or approve of her husband, so they ran off to City Hall. Thus, no real wedding means no real marriage. This is important, because her current boyfriend, Johnny Cammareri (Danny Aiello) has proposed to her. She demands that he get down on one knee and give her a ring. He does. They set a date for one month away. Johnny is headed to Sicily because his mother is dying, and he says they’ll get married when he returns. He asks Loretta to go see his brother and invite him to the wedding—there is bad blood between the two brothers and Johnny wants to end it.

So, Loretta goes to where Ronny Cammareri (Nicolas Cage) works. It’s here that we discover the source of the bad blood. Ronny, who works in a bakery, was engaged. One day, Johnny came in to get bread, and while the two were talking, Ronny put his hand into the slicer and cut off a good chunk of his hand. His fiancée left him because he was maimed, and Ronny blames Johnny for this. Loretta, wanting to make everything right, talks to Ronny and naturally, the two end up in bed together. So, this causes a problem for Loretta, since she is now sleeping with her fiancé’s estranged brother.

Meanwhile, Loretta’s mother (Olympia Dukakis) is certain that her husband (Vincent Gardenia) is stepping out on her, and she’s right. She considers (sort of) an affair with a college professor named Perry (John Mahoney), but doesn’t. Eventually, Johnny returns because of his mother’s miraculous recovery when she hears of his impending marriage, and everything resolves with pretty much every character in the film sitting in the Castorini kitchen.

I don’t want to get too much into stereotypes here, but I think I need to, at least for a couple of lines. Everyone in this film is very much the Italian stereotype. There’s a lot of talking with not just the hands, but with the entire upper body. There’s a lot of surface emotion, the sort of “if you don’t do what I want you to do, you’re going to kill me and dance on my grave” sort of Italian parent stereotype. It’s all over reaction to everything, and yelling without cause. I don’t think I could survive an Italian family. My ancestry is German, English, and Danish. The German makes clan Honeywell capable of anger, but that Danish blood keeps us a lot icier. An Italian family would make my head explode, at least per the stereotype.

So, because of this, there is a certain part of this film that drives me crazy. Everyone seems so damn loud and overly passionate all the time. I really just want them to calm down and shut up now and then, but they never do.

Personal bias aside, though, there still isn’t a lot here that I see as being particularly special. It’s good—don’t get me wrong. I like Cher in this role a lot, I’m okay with Nic Cage here, and most of the other players are as good as they regularly are. I just wish there were more “here” here. It’s a pretty standard formula. Boy and girl plan to get married, something happens to change the mind of one of them, a different marriage happens because love. The only difference between this story and most rom-coms that follow this plot is that most involve some sort of road trip or travel, and Moonstruck just involves opera. If you’re a rom-com fan, you could find a lot worse out there. If you don’t like them in general, this one probably won’t convert you. It certainly didn’t convert me.

Why to watch Moonstruck: If you aren’t sold on Cher as an actress, this one will go a long way toward changing your mind.
Why not to watch: There are certainly better rom-coms available.