Try it with Peyote 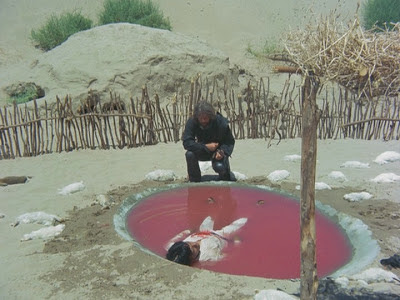 I try not to complain too much about the films I watch, but sometimes I just can’t help myself. El Topo is going to be one of those times. Let me put it this way: El Topo broke my DVD player. It was fine a couple of days ago, and now, suddenly, the remote has stopped working (it’s not the battery; I checked) and the play button on the machine itself no longer takes the film off pause. I may use this opportunity to upgrade to a Blu-ray player, as I am apparently the only person in the world without one. And Christmas is coming anyway, so that might top my list. But for now, it means that this will be the last DVD on the big ol’ television for some time.

How in the holy fuckballs do I explain El Topo, though? I have no idea how to piece this damn thing together. It feels like the natural child of a film like Un Chien Andalou, but that one actually made more sense and didn’t have the discourtesy to run for just over two hours. El Topo has the sort of violence that’s expected in a Western, but makes about as much sense as marimba-playing swordfish. For the life of me, I have no idea what the hell I just watched.

I’m going to walk through this, though, and see if it makes any sense when I try to relate the narrative, or at least what I can determine of the narrative. A man in black called El Topo (Alejandro Jodorowsky himself, “El Topo” translating as “The Mole”) rides out of the desert with a naked child (the director/star’s son Brontis). He finds a town where everyone has been mercilessly slaughtered and then encounters three men who have been sent to kill him. He kills all three, dragging the identity of the people guilty of the slaughter out of them. There are five remaining men in that gang—the Colonel (David Silva) and four men who seem to kill with abandon and otherwise act like animals or deranged children. They kill at random and torture for fun. El Topo rides in and kills them all, humiliating the Colonel before killing him. With this, he leaves his son in the care of a group of monks and rides off with Mara (Mara Lorenzio), the former woman of the Colonel.

Mara tells El Topo that he can become the greatest gunfighter in the world if he meets and defeats four different weapon masters. This he does, learning something from each one and killing each one in turn through luck or a trick rather than through his own skill. When he is done, he revisits the scene of each of their deaths, finding their graves inhabited by bees. Eventually, Mara betrays him and rides off with another woman, who shoots El Topo multiple times. He is rescued by a group of dwarfs and physically deformed people, who drag him off into a cave. Thus endeth the first section of the film.

El Topo wakes up years later in the cave. The mutants and dwarfs are trapped inside, unable to reach the exit, but El Topo, being tall and undeformed is capable. He leaves and discovers a nearby town where he performs with the dwarf girl (Jacqueline Luis) who took care of him during his “meditation.” The townspeople all belong to a cult that evidently worships the eye in the pyramid symbol and plays Russian roulette as a means of worship. El Topo and the girl do a comedy act to raise money to buy dynamite to blast open the cave so that the mutants can escape. Meanwhile, El Topo’s son (now played by Robert John) arrives in the town and is appalled by the religion of the locals. He recognizes his father and determines to kill him, but not until he has freed the people of the cave.

Throughout this, there is plenty of symbolic stuff going on, but I have no idea what any of it means. I’m always a little suspicious of symbols that I completely don’t understand and can’t attach to anything. Part of me thinks it’s just evidence that I’m really stupid and part of me things that the filmmaker is just messing with his audience. With El Topo, that definition pretty much describes everything from the naked child to the bees to El Topo’s own surprising hair when he awakens in the cave. I don’t know what any of it is supposed to mean.

And here’s the thing: I simply don’t care. I’m willing to work at a film if I think there’s something worth having on the other side. With El Topo, I’m not at all convinced that there is anything of any value here. It’s just weird images, a lot of nudity, and some parallels to religious philosophy in places. But it’s also a hodgepodge of flashing images and absurdity.

In looking for a way to cap this, I’m going to borrow the words of fellow 1001 blogger Klaus Ming, who said of El Topo, “Though El Topo might be explained as allegory for various world religions, one might ask the question: why bother?” Why bother, indeed.

Why to watch El Topo: It’s a movie.
Why not to watch: If you can understand it, you are insane.