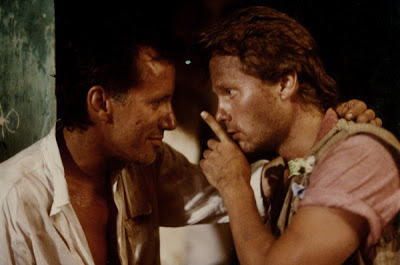 It’s almost a cliché to make a movie about a journalist in a war-torn area of the world. It’s a pretty easy story to dream up, really in part because it’s almost a meme, in part because it’s the sort of exciting job that people like to think about, and in part because there are plenty of true stories to use, so there doesn’t need to be a lot of imagination in coming up with a story. That’s certainly the case with Oliver Stone’s Salvador. There’s tons of bloodshed and human horror and exactly the kind of high-level conspiracy that Oliver Stone seems to thrive on.

Richard Boyle (James Woods) is a photojournalist who has produced a good amount of great work in hotspots around the world in the past. Unfortunately for him, he’s also burned through any good will he might have every earned by being a grade-A shit. He’s a drunk, a drug addict, and has pissed off so many people that no one will hire him or lone him any money. He and his wife are about to be evicted from their crappy little apartment. But he has an idea—El Salvador is turning into a complete hellhole, and if he can get there, he might be able to get some pictures and get back on top of his game.

His one friend left in the world is Doctor Rock (James Belushi), an out-of-work disc jockey about to be divorced. With almost no money between them and nothing better to do, the pair o them head to El Salvador and discover that what they saw on television is not anything like the reality. It’s much, much worse, and the problem is being compounded by the presence of the American military under the recent election of Ronald Reagan.

Their arrival is punctuated by their being witness to the killing of a student. Boyle meets up with some old companions, notably journalist John Cassady (John Savage), who decides to give Boyle a break for old time’s sake. Boyle continues his profligate ways, drinking and whoring, but also comes to realize that what is going on in El Salvador is perhaps the worst thing he has ever seen. The ambassador, Thomas Kelly (Michael Murphy), appears in all respects to be a decent man caught in the middle of an intolerable situation, pressured by the military and in particular by El Salvadoran strongman Maximiliano Casanova (Tony Plana), who is the darling of the American military. Boyle knows he needs to leave, but is unwilling to go without his girlfriend Maria (Elpidia Carrillo).

Salvador is a film that trades on its brutality and unflinching look at violence. There is nothing nice or pleasant about what happens, and that’s very much the entire point of the film. We meet one of Boyle’s friends, an aid worker named Cathy Moore (Cynthia Gibb). Later, we see her driving through the countryside with a car full of nuns. The car is pulled over by a death squad, and the women are brutally raped and shot. It’s unflinching and ugly, and this is very much the point that Stone is trying to make.

Unfortunately, there are times when the very human stories of Boyle and Doctor Rock get lost in the political shuffle of Oliver Stone’s world of big government conspiracy and El Salvadoran death squads. The film is at its best when the horror and carnage is viewed through the very jaded but not jaded enough eyes of Boyle and loses some of its motive strength when it becomes overtly political. In addition to telling the story here, Stone wants us to consider the American role in what happened in El Salvador, and that’s certainly a legitimate place to take this film, but such wanderings veer away from the human struggle of Boyle to find himself again in this hellhole and to rescue what shreds of humanity he has left to him.

The main problem I have, though, is that since this is an Oliver Stone film based on a true story, I wonder how much of the story is factual, how much is Stone’s conspiracy brain kicking into overdrive, and how much is pure fancy put there to ramp up the tension. This is particularly true with the ending—we’re left with something of a cliffhanger and no way to determine if this is the truth or something there to evoke our sympathies.

That, friends and neighbors, is frustrating. Regardless, there are some terrific performances here. John Savage is almost always an underrated performer, and James Woods, while off the radar lately, turns in his usual ballsy performance. It always tends to surprise me when Jim Belushi is actually worth watching in something. He was at one point a capable actor as shown here, at least before he sold his soul to the siren call of bad sit-coms.

So is Salvador worth watching? Yes, but with the typical caveat that comes with any Oliver Stone film based on a true story. Watch, but realize that more than you think might well be fictionalized or simply the workings of an over-active imagination.

Why to watch Salvador: A human story in a terrible hellhole.
Why not to watch: It’s very hard to like your main character.