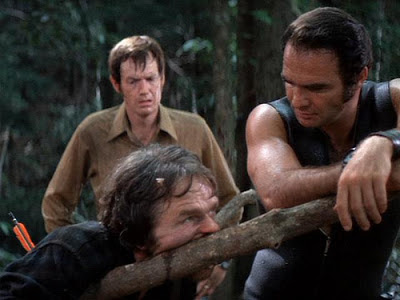 If there are two things that everyone, even those who haven’t seen it, know about Deliverance, it’s the opening with “Dueling Banjos” and Ned Beatty being forced to squeal like a pig. There’s a lot more to this film, of course, but those two things are by far the most memorable. This is a film that in many ways defined a particular part of the world. Just as Jaws made beaches a lot scarier and Fatal Attraction made the idea of marital infidelity a lot less attractive, Deliverance put the fear of the backwoods and the inbred into the city folk. This is not without good reason.

In many ways, Deliverance is a high concept film: “Four city men paddle down a river and run into significant trouble with the locals.” Getting there, though, puts us through a terribly rough ride. Once things start to go bad, they don’t stop. Deliverance takes its time for the first 40 minutes or so and then accelerates into increasing amounts of real, believable terror for the next hour or so.

A group of four men from Atlanta decide to take one last trip down the Cahulawassee River, because in a few days, the river will disappear. The government is planning to flood the river valley, turning the whole area into a massive lake that will be dammed as a power source. The four men are experienced woodsman Lewis (Burt Reynolds), similarly experienced but less assured Ed (Jon Voight), and relative newbies Drew (Ronny Cox) and Bobby (Ned Beatty). It’s evident right away that these four men hold the locals in some disdain and don’t take them very seriously. Drew and an evidently inbred local (Billy Redden) play “Dueling Banjos” together, but the local refuses to shake Drew’s hand when the duet is finished. Lewis hires a few others to drive their cars down river so they can pick them up on Sunday.

The first day passes pretty uneventfully. It’s not until the second day of the trip when things get difficult. The two canoes get separated, with Ed and Bobby out in front. They pull over to the shore to wait for the other canoe and they have a run-in with some local color. What this means is that Ed is tied to a tree and Bobby is forcibly raped at gunpoint. Just as it’s about to be Ed’s turn, Drew and Lewis show up. Lewis, an experienced huntsman, shoots the rapist through the back (literally through him—the arrow pokes out a good foot in the front), killing him while the accomplice runs off.

This sets up the last hour of the film. The four men have to decide exactly what they’re going to do next. They have a body on their hands. Drew wants to take the body back to civilization with them, convinced that the law will do right by them, considering what happened. Lewis, knowing that the area will be a couple of hundred feet under water soon enough thinks they should simply bury the body so it will never be found. Bobby agrees, wanting the whole thing to stay hushed up. Ed finally relents.

From this point forward, things go from bad to worse. Drew falls out of his canoe just as they are going through some rapids. The canoes wreck, and Lewis breaks his leg badly. Additionally, the three remaining campers believe with reason that they are being pursued by the accomplice of the dead man.

In some ways, it’s unfair that Deliverance is best remembered for the two things that everyone remembers because there is a lot more here than just an inbred banjo player and Ned Beatty in his underpants. This is a tightly-wound film from the moment things start to go bad until the ending moments, one that contains any number of horrifying sights and visions made all the more terrible because they are entirely within the bounds of reality.

And really, I’m not sure higher praise can be given to a film than this: it is terrifying in a way that few films are. Its strength is that it takes these four men, so confident in their own world of the city, and places them in a location where they are essentially powerless. It’s incredibly effective in no small part because it’s so easy to imagine oneself in the exact same position. I’ve been canoeing and camping, and while there are moments of fun and excitement, even without hillbilly rapist mountain men around, there are plenty of scares for the inexperienced. Perhaps the most terrifying thing is seeing Lewis, so confident at the start of the film, reduced to tears of pain and fear when they come through a final set of rapids.

In other words, it’s easy to see why Deliverance is so highly respected. I’m not sure I’ll watch this again soon, but I can’t say I’m sad that it’s a part of my personal collection.

Why to watch Deliverance: As good a thriller as made in the last 50 years.
Why not to watch: Ned Beatty in tighty whities.