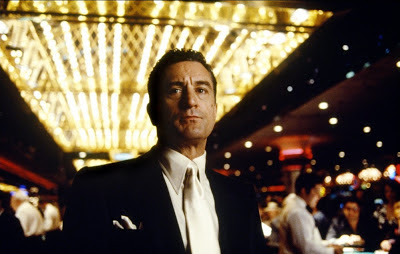 My most recent memory of Casino before tonight is when my podcasting partner Nick Jobe at Random Ramblings of a Demented Doorknob watched it some time ago. I remember it distinctly because Nick didn’t exactly hate the film, but he did find it dull. I’d have loved to have been able to help Nick out, but I hadn’t seen the film before tonight. I liked this film quite a bit more than Nick did, although I understand why he felt lost in it.

Casino is the story of how the Midwest mob showed up in Las Vegas, sort of. It’s a lot more about a guy who made really good choices except for the few times that he really didn’t and the consequences that had for him. It opens with a car bomb placed in the vehicle of one of our narrators. Sam “Ace” Rothstein (Robert De Niro) is one of the truly great handicappers, always making a killing on any sporting event. The Midwestern families decide that that makes him the best person to run a new casino in Las Vegas.

The mob is skimming off the top, which is exactly the entire point of the operation. In addition to the millions the casino pulls in, there’s a whole chunk of millions coming in without anyone knowing about it. Everything changes when Rothstein’s old friend Nicky Santoro (Joe Pesci) arrives in town to act as muscle. Santoro doesn’t have the class or skills of Rothstein, but he’s a top enforcer despite his small stature. In addition to acting as the muscle, he pulls heists and shakedowns. Around the same time, Rothstein becomes involved with a former prostitute and constant hustler GingerMcKenna (Sharon Stone). Despite his better judgment, Ace proposes to her and she accepts. He hedges his bet slightly by getting her pregnant and waiting until the child is born first.

And everything starts to go downhill. First, Ginger is unable to completely break ties with her old pimp Lester (James Woods). Second, Ace angers the local gambling commission by firing the brother-in-law of the County Commissioner, who retaliates by immediately beginning an investigation into the casino and Ace Rothstein. Nicky becomes a liability with his uncontrolled actions and eventually gets banned from every casino in town, which causes an uptick in his other criminal activity.

Eventually, it all goes to hell completely. Ginger becomes a raging alcoholic and cocaine addict, Nicky goes completely out of control, and eventually the Feds get involved and discover that there are plenty of bad dealings at the Tangiers Hotel and Casino. Compounding matters, Ginger begins an affair with Nicky, which could get everyone killed, as the bosses are old school enough to kill the wife for cheating, the fellow adulterer for doing that to friend, and the husband for being stupid enough to let it happen. As the story begins to wind down, it seems that everyone is on the chopping block, and we get several minutes of blood, beatings, and butchery, which takes us back to that car bomb at the start.

What’s interesting here is the dual voiceover. We frequently get both Ace’s and Nicky’s opinions on what is going on around them, often in the same scene. This gives us an interesting perspective on the dealings that we see, and frequently, the two men see things very differently. This is a bit overused, though. It’s cool the first few times it happens, but then it just gets to be too much. At one point, we even get a third narrator for a few lines. It almost felt gratuitous, as if there just because it could be. I’m not sure it was needed, and none of it was needed to this extent.

However, Casino is successful in a lot of respects. The story is a good one (despite what Nick might say), and while we’re looking at massive amounts of money and drugs and gang ties, the problems that crop up are the basic and simple ones—infidelity, drug and alcohol addiction, and misplaced loyalties.

I also like the sudden spurts of violence. There’s a tremendous scene early on, for instance, when Ace spots a couple of cheats in the casino. We know something is going to happen. One of them is dragged into a back room and threatened with a circular saw. It’s soon evident that his hand isn’t going to be cut off, so it’s an incredible shock when one of his hands is smashed repeatedly with a hammer. The orchestra of violence at the end of the film is almost mesmerizing. All of this works really well.

For the record, I like Joe Pesci, and no one really plays a mob psycho the way he does. This film and Goodfellas did more to cement him in that role than anything else, almost typecasting him to where if he’s not playing this part, he’s often playing a parody of it. De Niro, as always, is on the top of his game. It’s Sharon Stone, though, who is the real surprise here. I’m not much of a Sharon Stone fan, but I can’t think of anyone else I’d like to see in this role. She nails it. She’s seductive when she has to be, insane when she has to be, and completely believable in every frame.

Americans in general like gangster films and always have. It helps a lot that Martin Scorsese liked making them, and helps even more when some of them are this good.

Why to watch Casino: Scorsese, De Niro, Pesci, Stone. You need more?
Why not to watch: The dual voiceover is cool, but there’s way too much of it.