The giant creature version of a familiar animal is a trope that’s been around at least since King Kong and possibly earlier. Kong popularized it at the very least. In the 1950s, giant monsters became de rigeur for Saturday matinees, and the creatures themselves were both more terrifying and less terrifying. They were less scary because the monsters themselves started to be based on more mundane creatures than gorillas. They were scarier, though, because we had entered the Atomic Age, which meant that the monsters often became radioactive or mutated in some way. 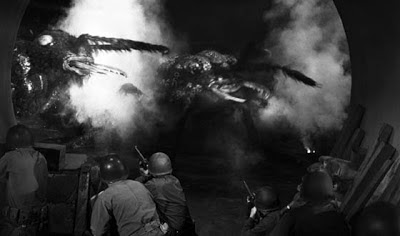 There’s a host of these films. Any Mystery Science Theater 3000 fan worth his or her salt can spit out names like The Deadly Mantis or The Killer Shrews without hesitation. Most of these movies were dull and silly, offering a few (very) cheap thrills and stock footage of everyday animals that suddenly became a serious threat to humanity. Of these, it’s hard to argue against Them! being the cream of a stunted and bitter harvest. This isn’t Shakespeare, of course, but it’s intelligent and doesn’t play hob with odd science effects and terms. More importantly, it gives us characters that, while in a crazy situation, feel real.

The plot is simple. Out in the desert near where the first atomic bomb tests took place, a young girl is found wandering. She appears to be in a state of shock when she is picked up by the police. Up the road, the police find an abandoned car and a ruined trailer. Even further up the road is a destroyed general store with the body of the proprietor in the basement. Things are fishy, and a strange print in the sand near one scene has everyone baffled. Another disappearance later, this time a police officer, and we’ve got a genuine mystery on our hands.

The answer to the mystery is ants—giant, mutated ants of up to 30 feet in length. An exhaustive search reveals the ant mound, and the creatures are kept underground with phosphorus rounds fired from bazookas. At night, once the area has cooled a little, cyanide gas is pumped into the hole, killing off the swarm. However, it is discovered that two queen ants have hatched. These must be tracked down immediately, least it result in worldwide calamity. One is disposed of when it reveals itself on a ship. The other is more serious; the final queen has taken up residence in the sewers of Los Angeles and must be hunted down.

Them! is hardly the only giant critter game in town, but it’s certainly one of the most competent and entertaining. Because this film follows (and even helped invent) a basic formula, asking why it works so well is completely legitimate. A good cast helps, but even that is not guarantee. So why is it that Them! succeeds in a world of Deadly Mantises, Earth vs. the Spiderses and Giant Gila Monsterseses?

For one, Them! uses practical effects rather than putting a bunch of regular ants onto a set of miniatures. This lets the people actually interact with the giant beasts, and that goes a long way toward believability. The effects wouldn’t convince a modern six-year-old, but that’s beside the point. That we have actual giant ant puppets is the point. Yes, they’re obviously puppets. Yes, they look like they’re made out of felt and chicken wire. It doesn’t matter. They’re real and a part of the world of the characters, and this has real benefits on the performances and on the reality of the film.

Naturally, there’s something like a love story (there always is), in this case between FBI agent Robert Graham (James Arness) and ant scientist Dr. Pat Medford (Joan Weldon), but it’s not played too heavily. There’s a sense that these two are interested in each other and concerned for each other, but no dippy true-love scenario. Additionally, Pat is treated with a good deal of respect throughout the film, which I appreciate. Robert opposes her going down into the first nest because of the danger, but she insists and goes down anyway, and he conclusions are given the same weight as they would from a male scientist.

It also helps that her father, Dr. Harold Medford (Edmund Gwenn) really feels like a scientist more excited by the discovery than he is worried about the danger. Gwenn is best known these days as the guy who played Kris Kringle in Miracle on 34th Street. He plays a distracted but very smart professor just as believably. Sgt. Ben Peterson (James Whitmore), who is one of the first cops on the original scene, is also completely believable in the role. He’s scared, but he’s going to do his job, no matter the cost. It all works.

Yes, it’s melodramatic at times. Doesn’t matter. Seeing the little girl (Sandy Descher) walking through the desert, empty eyes staring forward is really effective. Yeah, it’s a little silly to have her shouting, “Them! Them!” instead of “Ants! Ants!” when she comes out of her catatonic state, but no matter. It amps up the tension and gives us that much longer to wait before the first moment we see one of the giant ants appear on the screen.

I don’t really know 100% why it works, but it does. It’s fun. Them! isn’t scary for a modern audience, but it’s still really entertaining and solid, and if you haven’t seen it, you should correct that soon.

Why to watch Them!: Atomic horror the way it should be done.
Why not to watch: To a modern audience, the ants are pretty obviously puppets.