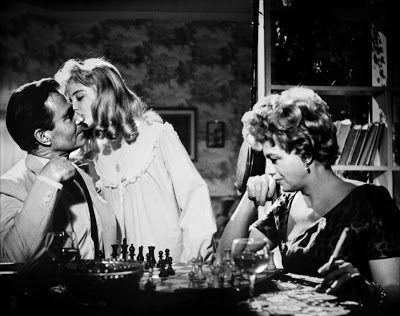 I was tempted, very tempted, to put “comedy” in the tags for this review of Stanley Kubrick’s Lolita. Despite being most definitely a devious domestic drama and a twisted and disturbing romance, there is a definite sense of black humor running through the entire thing. In many ways, the situation is so perverse and the editing so severe because of its perversity and the Hays Code, it almost needs to be viewed as comic. I’m also going to annoy a few people with this review; in the 1001 Movies blogging community, Lolita is regularly seen as the least of Kubrick’s films on the list. I found a strange pleasure in it, a bit of cinematic schadenfreude.

For those who don’t know the story, allow me to sum it up very quickly: academic and quirkily named Humbert Humbert (James Mason) takes a position in the United States. The summer before, he moves to a small town and takes a room in the home of a widow named Charlotte Haze (Shelley Winters). He agrees to stay because of the seductive power of Charlotte’s daughter, Lolita (Sue Lyons). Eventually, Humbert-squared marries Charlotte to get closer to his new step-daughter, and he eventually embarks on a sexual relationship with the young girl. This is pretty much the plot of Nabokov’s book as well. The only major change made by Kubrick is upping her age (roughly 14 in the film, 12 in the novel).

Of course, things are a lot more complicated than this, as befits a film that jumps into the realm of pedophilia with both feet. It’s also evident that this story is vastly different from what is generally expected. The term “Lolita” comes from this story, of course, and in general, that word is used to mean a sexually precocious girl, a young temptress. Lolita certainly fits this description, but the sexual dynamic in this film is vastly different than her pursuing him exclusively. Humbert is smitten with the girl on his first viewing of her, lounging in the garden in a bikini.

What’s also evident here, and it’s one of the more effective aspects of the film, is just how vapid Lolita really is. That might be overstating it a bit—ecept for her sexual aggression and evident experience, Lolita is a pretty typical 14-year-old girl. She’s interested in movie stars and popular songs and has a habit of constantly popping her gum. A great deal of the film’s humor comes from this juxtaposition—the distinguished Humbert contrasted with the incredibly average and banal Lolita.

Thrown into this mix is the character of Clare Quilty (Peter Sellers), a twitchy, obscene playwright who evidently develops the same obsession for young Lolita as Humbert. Quilty appears throughout the film—before Humbert’s arrival, he gave a lecture in the town and evidently had a fling with Charlotte. Quilty, we quickly learn, is a complete hedonist in the classic Roman tradition, and one of his pleasures is the pursuit of Lolita. He pops up in various guises throughout the film.

As might be expected with a film on this topic, Lolita takes a very dark turn. The first hour, though, is darkly humorous. Just through body language, it’s evident that Humbert is lusting after Lolita, Lolita herself is encouraging this, and Charlotte is madly infatuated with Humbert. Even when the film gets darker, there’s a sardonic edge to it, mostly from Lolita herself, who is as manipulative a character as can be encountered. Character names are off just enough to add a comic touch. We get, as examples, a Mrs. Le Bone, a Mrs. Starch, and a Mr. Swine to say nothing of Humbert Humbert. Even the soundtrack has a sense of humor. The “Lolita Ya Ya” played by the Nelson Riddle Orchestra is, much like Lolita herself, juvenile, flirty, playful, a bit vapid, and kind of dirty.

What also works here is just how deeply the perversity runs and just how twisted the characters—almost all of them—really are. There’s a hint of this early on when Humbert is approached by Jean Farlow (Diana Decker), a friend of Charlotte’s, who drops a few hints that she and her husband might well be interested in an intimate get-together with Charlotte and him. Clare Quilty is the most obviously morally decrepit, but it’s not too difficult to recall that Humbert’s evident charm and polish are essentially covering up the same sin and the same obsession. This is by no means a perfect film, nor even a great example of a Kubrick film. It doesn’t really come close to his best work, but it’s also far better than his lesser films (Barry Lyndon comes to mind).

If I have a complaint here, it’s the opening sequence. Rather than simply going through the story, we get the end, or at least most of the end. It’s a cheap tactic, and one that in this case removes a great deal of the potential drama. That scene placed at the end would be a more satisfying conclusion. At the beginning, we’re not invested in the characters and thus it loses a great deal of its emotional weight.

While Lolita certainly falls in the bottom half of Kubrick films that I’ve seen, I have to say I was mildly surprised by it. This is especially true considering all of the vitriol from my fellow 1001 bloggers. Lighten up, folks!

Why to watch Lolita: It’s wickedly funny once you dig past the main topic.
Why not to watch: The main theme of this film is pretty icky.