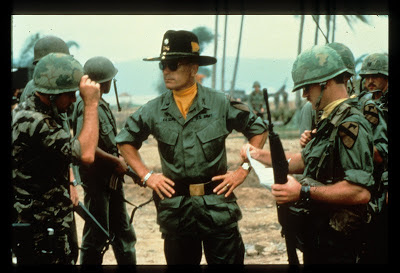 It’s not easy to write about Apocalypse Now because so much has already been written about it. I’ll come clean at the start here and say that I think it’s the best Vietnam War film ever made and one of the best war films in general. When I was younger, I’d have picked Full Metal Jacket. FMJ is underrated—the opening half is so good that people forget just how solid the second half is. But Apocalypse Now is the full package. It conveys not only the battlefield of the war, but the mental landscape as well. It’s as much a physical depiction of the war as it is an emotional reaction to it.

Captain Willard (Martin Sheen) has returned to Saigon after rotating back to the U.S. following his first tour. He spends a week in a hotel room slowly going crazy until he is given an assignment. His mission is to commandeer a boat and take it up river into Cambodia and take out a man named Kurtz (Marlon Brando), who has gone off the rails from the more standard operating procedure of the U.S. military. Accompanying him on this mission are the crew of his boat: Chief (Albert Hall), who wants to keep his men safe and make it back; “Chef” Hicks (Frederic Forrest), a New Orleans saucier who really just wants to make food; “Clean” (Laurence Fishburne), a young kid who possibly lied about his age to join the military; and Lance Johnson (Sam Bottoms), a world-class surfer-turned-sailor.

For this review, I had the choice of the original theatrical release or the Redux version, which pads in about 50 additional minutes. I went with the Redux version because it is the one with which I am less familiar. I’m not sure it was the best film decision I’ve made recently. The shorter version is far better because even at its 2 ½-hour length, it’s much more streamlined. The longer version gives us more detail in places and a few additional scenes, but really adds only length to an otherwise long film. There’s a little bit of rearrangement, too. Some consider the two versions to essentially be different films. I’m not convinced.

The longest added sequences involve the return of the Playboy Bunnies to the story and the sequence at the French-held plantation. Neither of these bring much to the story for me. The first is a bit of silliness and evidently an excuse for some nudity and some insight into the eventual mental slide of Lance. The second is a calm-before-the-storm idyll that perhaps shows us a few new victims of the conflict, but otherwise doesn’t do much for us.

Anyway, both versions of the film trade on long passages that are essentially events in Willard’s trip up the river in his quest to eliminate Colonel Kurtz. The most memorable by far is the mission’s encounter with the air cavalry. Willard is told that the air cav will escort him to the entrance of the river, but this comes as news to Lt. Colonel Kilgore (Robert Duvall), who agrees to the mission anyway. Kilgore is one of Duvall’s most noteworthy characters in his long and storied career, impressive since even in this extended version he appears on screen for less than 20 minutes. Kilgore, who wants only to surf, manages to show everything that’s wrong with the American military in Vietnam. He risks the lives of his men so that he and a few others can surf particular beaches, and he is never reprimanded or called into question over his behavior, since he evidently gets results.

The other role here that is most memorable is Dennis Hopper as the photojournalist who has thrown in with Kurtz collection of military oddities. Hopper was in a position in his career where he was just about willing to take anything. Here, he’s pretty much playing himself, someone strung out to the very edge of his existence. He’s looking for truth, and has found only Colonel Kurtz and his waking insanity.

Apocalypse Now almost defies description. It is very much a film that needs to be experienced more than explained. I said at the beginning of this that I think it is the greatest film made about Vietnam, and I stand by that. Certainly there are other great films about this conflict, but none of them feel like this one. None contain this same sort of unbridled insanity, this feel of complete chaos and destruction that nonetheless is leading to a specific point. What happens does so because it is both terrible and inevitable.

The Redux cut of this film is still a magnificent film, but it lacks the intensity of the original cut, which I find superior. Both are worth seeing, though.

It’s worth noting that the film is loosely based on Joseph Conrad’s “Heart of Darkness,” one of the great stories by that luminary. I’m a fan of Conrad’s work, although I prefer “Lord Jim.” There is something primal in his writings, something that calls to the savage, and that spirit is very much alive in Apocalypse Now. 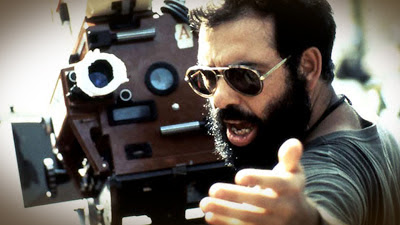 In the opening moments of Hearts of Darkness: A Filmmaker’s Apocalypse, the documentary about the making of Apocalypse Now, Francis Ford Coppola explains what Apocalypse Now really is. It is not, he says, a film about Vietnam, but is Vietnam itself. Like the American military, he went in with too many people, too much money, and too much equipment, and everyone went insane.

The story of the filming of Apocalypse Now is every bit as compelling as the film itself and reflects the same sort of chaos with a purpose as the film does. Really, it’s actually a shock that the film was every released. Originally planned for 14 weeks of photography, the film ballooned to a whopping 238 days of principle (that’s 34 weeks for those of you playing at home). Sets were ruined by monsoons and needed to be rebuilt, forcing a shutdown of four months.

In fact, almost anything that could have gone wrong with a film shoot did go wrong. The role of Captain Willard was originally given to Harvey Keitel, and after a week of filming, he was replaced by Martin Sheen. It’s difficult to imagine Harvey Keitel in this role, but during the filming, Sheen suffered a massive heart attack and was forced off the set for a month. The helicopters used in the first hour of the film came from the Philippine government, but would suddenly leave the set to fight a rebel insurgency in the south. Brando arrived on the set vastly overweight, unfamiliar with the source material, and costing more than $100,000 per day.

Much of what is interesting here are the strange little factoids that pop out. Originally, the film was going to be shot in Vietnam while the war was going on. George Lucas was signed on as the original director. Who knew? Laurence Fishburne, who plays the young Mr. Clean, was even younger than his character, a mere 14-year-old boy when the filming began.

Hearts of Darkness is a film about obsession, about complete abandon in the pursuit of art and vision. Coppola put everything he had into the creation of his film, mortgaging his house, mortgaging his entire life and reputation to make a film that went so far off the rails and stayed off the rails from the beginning to the end.

It’s compelling stuff. If you happen to dislike Apocalypse Now, Hearts of Darkness will hold no interest for you. If you are a fan of the film, though, this will make it that much more impressive and that much more spectacular.

Why to watch Apocalypse Now: It is the definitive film on the Vietnam War.
Why not to watch: The Redux version doesn’t add much but about an hour, so you should stick with the original cut.

Why to watch Hearts of Darkness: A Filmmaker’s Apocalypse: It’s worth seeing what Coppola went through to bring this film to life.
Why not to watch: If for some reason you don’t like Apocalypse Now, you won’t find much here.