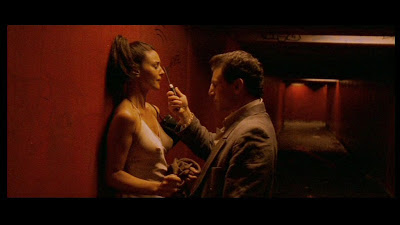 It’s evident within the first minute of Irreversible that it’s going to be a rough ride. That first minute, when we see the closing credits of the film indicate that nothing is going to be what we expect here. What follows is one of the most disturbing and upsetting 100 minutes ever seen on film. Certainly there are films that go to more difficult or horrible places than Irreversible, but none that I can think of with this combination of horrifying imagery and physically upsetting camerawork and ugly headspace. Irreversible is less of a movie than it is a visual and physical assault on the nervous system. I’m not entirely sure how to process it.

Irreversible is not the first film in the new French Extreme, but it is one of the most infamous. I’m not going to attempt much of a plot summary here beyond the basics. Alex (Monica Bellucci) and Marcus (Vincent Cassel) are in a relationship and Alex discovers she is pregnant. However, there are problems with the relationship because Marcus drinks too much and flirts with other women. Angered, Alex leaves a party and encounters a man named Le Tenia (Jo Prestia) who is viciously beating a transgendered prostitute named Concha (Jara-Millo). He turns his attention from Concha to Alex and brutally rapes her. Marcus and his friend Pierre (Albert Dupontel) then hunt for Tenia and exact a brutal revenge. All of this is show in reverse order. We see the aftermath, then the revenge, then the rape, then the lead up to the rape, and then Marcus’s and Alex’s life before these incidents.

That Irreversible is show backwards, Memento-style is difficult enough. More challenging is the camerawork. Through large sections of the film, the camera spins and flows, never giving the audience a consistent frame of reference. Frequently, the action is shown sideways or upside down, or at severely canted angles. In these moments, the camera moves and spins constantly. It’s not merely dizzying; it’s nausea-inducing, the sort of thing that makes the film difficult to watch even if it were about puppies and rainbows. Seriously, I got motion sick from Cloverfield, and it’s like a merry-go-round compared with the outer space rollercoaster that is Irreversible. The first third (approximately) of the film takes place in this environment, and I’m not ashamed to say that it took me a lot of stopping and starting, since I didn’t feel like vomiting on my laptop. The swinging camera is also used as a segue to move us from the end of a scene to the next jump back in time.

Of course, when Noe wants us to see things in the cold light of clarity, he stops with the waving, swinging camera and the vertigo-inducing camera angles. For instance, in the rape scene, which goes on for a good 10 minutes or so, Noe plants the camera and forces us to watch. This is without question the most famous scene in the film and is because it is relentlessly brutal. I mean this. If you’ve seen it, you know what I’m talking about. If you haven’t, you aren’t prepared for it when it happens. You might think you are because you know it’s going to happen, but you just aren’t. That it’s followed by something just as awful…I don’t really have words.

As a film in the French Extreme, Irreversible is all about showing us things that we don’t want to see. It’s all about the breaking of taboos. The rape scene is a big part of that, naturally enough, but the early scenes in the gay club show what appears to be non-simulated gay sex and what is certainly non-simulated scenes of gay pornography.

I don’t know. I don’t even know if I respect this film for what it is or what it tries to do. It’s ugly and brutish and one of the most difficult watches I’ve had in a couple of years. I can’t say if I’m glad to have seen it or not because I really have no way to determine. I think I’m just relieved it’s done and I never have to see it again. But I’m certain I’ll think about it again.

Why to watch Irreversible: It’s one of the strangest headspaces you’ll ever be in.
Why not to watch: Motion sickness is the least of your worries.