The High Cost of Rice 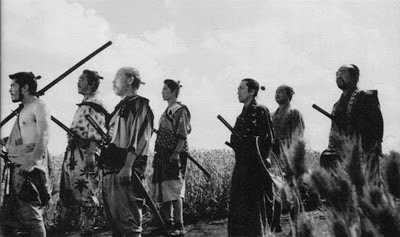 I’ve said this before, but it’s relevant today: my favorite Kurosawa film is the one I’ve watched the most recently. What that means is if you ask me for my favorite Kurosawa film, as of right now, it’s Shichinin no Samurai (Seven Samurai). Really, there aren’t any bad choices when it comes to Kurosawa’s great films. There’s no shame in picking this one, at least temporarily.

The story is simple enough that it was adapted into the classic Western The Magnificent Seven. While there are certainly cultural aspects of the film that are uniquely Japanese, the story itself translates to the American West very easily. We have a village of farmers who are constantly being harassed by a collection of bandits. Recognizing that they stole the village’s rice earlier in the year, the bandits decide that they will come back for the barley when it has been harvested. One of the farmers overhears this and returns to the village with the bad news. The old man of the village is consulted. He recommends that they hire samurai to fight off the bandits. However, since they have only food to offer, he suggests they look for hungry samurai.

So a group of villagers headed by Rikichi (Yoshio Tsuchiya) head off to the nearest city to see if they can find some ronin (masterless samurai) to aid in the defense of their precious barley. After a few false starts, they encounter Kambei (Takashi Shimura), a noble samurai who appears to be devoted to the idea of doing good rather than making profit or glorifying himself. After they witness him rescue a child, they follow. They also encounter Katsushiro (Isao Kimura), who pledges loyalty to Kambei and wishes to become his disciple. They also meet Kikuchiyo (Toshiro Mifune), a posturing wannabee who begins to follow the party in the hopes of being taken as a real samurai.

Over the next few days, they recruit four more members of the samurai team. There is Gorobei (Yoshio Inaba), who quickly becomes the second-in-command of Kambei; Shichiroji (Daisuke Kato), who was a former aide of Kambei and easily resumes his former role; Heihachi (Minoru Chiaki), who isn’t much of a swordsman but is entertaining and helps keep spirits up; and Kyuzo (Seiji Miyaguchi), a samurai who is most interested in his own physical and mental limits. Eventually, they accept Kikuchiyo as one of the group, making them the seven samurai of the title.

The rest of the film concerns the time of the samurai in the village, preparing it for battle, their dealings with the villagers, a budding romance between Katsushiro and Shino (Keiko Tsushima), and the battles against the bandits. Throughout, the villagers deal with their own inherent mistrust of the people they have hired to save them and the samurai learn precisely what the villagers are forced to do to survive from the attacks of the bandits. We learn about Rikichi’s dark secret, are constantly assailed by the cowardice of the villager Yohei (Bokuzen Hidari), and learn all about the relationship between Manzo (Katamari Fujiwara) and his daughter, the aforementioned Shino.

The real sell here, of course, are the battles, which are tremendous. Kurosawa was always at his best when filming wild fight sequences, and the ones here do not disappoint in any way. They are chaotic and beautiful at the same time, demonstrating the greed and recklessness of the bandits, the cowardice giving way to bravery in the villagers, and the martial prowess of the samurai. Impressively, many of these sequences go on for an extended period of time as the bandits charge and retreat and charge again, but never become dull or repetitive.

What’s most impressive, though, is that the characters we are given are completely distinct. Certainly it helps that the film runs close to three-and-a-half hours in its restored state, but even so, there are a lot of characters here. However, each of the seven samurai is completely distinct and identifiable immediately, as are the main villagers. There’s no confusing Manzo for Yohei or Rikichi, for instance. And when one samurai does or says a particular thing, it’s always what we have come to expect from that particular character. They are remarkably distinct for a film that could easily make them all essentially the same character without much of the audience noticing.

It’s this attention to detail that really makes the film work. We come to understand the plight of the farmers and even to sympathize with them. Similarly, we come to like and respect the samurai; even the sometimes insane and wild Kikuchiyo eventually becomes someone whose fate is important to us. The characters are given little quirks and habits. Kambei, for instance, loves to run his hand over his freshly-shaven head. Kyuzo never shows emotion and never boasts about his skills.

Kikuchiyo as played by the great Toshiro Mifune is worth an extra mention here. I had forgotten a lot of the details of this character, and in watching the film again today, I was surprised at just how much he reminded me of Mifune’s character in Rashomon. Many of the specifics of the two characters are close enough to seem identical—the constant scratching, the torn clothing, the leaping about and yelling, the posturing, even the hyper-confidence. Evidently it was so successful in Rashomon that Mifune simply did the same thing here.

I can’t recommend this film highly enough. Even at 207 minutes, this film never drags and is never dull. It’s a fast 207 minutes, and you’ll wonder where the time went when you watch. If you haven’t seen this, there’s no time like the present—hunt it down and make yourself some popcorn.

Why to watch Shichinin no Samurai: Kurosawa’s most famous film for a reason.
Why not to watch: If you don’t do subtitles, it’s a long time spent reading.