Film: A Matter of Life and Death (Stairway to Heaven)
Format: DVD from NetFlix on laptop. 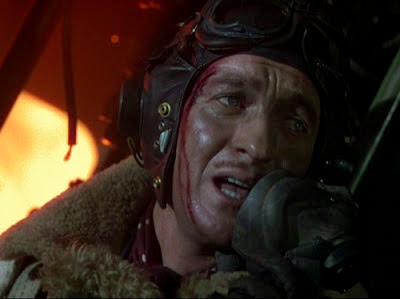 If people ask me why I watch movies from a list based on what other people think is worth watching, I point to films like A Matter of Life and Death (alternately titled Stairway to Heaven in the U.S.). This is not a film I’d have picked up without being told I should watch it, and I couldn’t be happier that I spent my time with it tonight. This is not just a charming little fantasy, but a very smart film, one that beautifully blends fantasy and reality, deals with questions of law, justice, and love, and manages all of this neatly and efficiently. It also gives me another look at the great Roger Livesey, who I need no excuse to watch.

The film takes place at the tail end of World War II. Pilot Peter Carter (David Niven) is trying to limp home, but knows his plane can’t make it. His crew has already bailed out, and his radio operator (Robert Coote) has been killed. Peter radios in and contacts American radio operator June (Kim Hunter) and tells her what has happened. He also tells her that he’d love to meet her for real, but that he’s going to jump out of the plane. Normally, that’s not a big deal, but his chute and the remaining chute on board have been destroyed. He knows it’s a death sentence, but he’d rather jump than burn. And so, wishing only for time to truly meet June, he jumps.

But if he died, there’d be no movie. Instead, because of the thick fog, he gets missed by the man who was supposed to take him to his eternal reward. Conductor 71 (a very effeminate and enmake-upped Marius Goring) is now sent to Earth to collect the soul of Peter Carter to balance the ledger. Unfortunately for him, down in the real world, Peter and June have met and fallen hard for each other. So, because he’s now in love, Peter appeals his case and is granted an appeal. He’ll get his case for more life tried in the highest court.

Meanwhile, June has decided to get Peter some help, because he’s evidently having full-blow hallucinations. These hallucinations are, of course, the presence of Conductor 71. June takes him to Dr. Reeves (Roger Livesey), who determines that there is a significant medical issue going on in Peter’s brain, manifesting itself as these visions. Meanwhile, Peter is trying to determine who should represent him at the trial. Things go his way, sadly, when Dr. Reeves is killed in an accident, making him suddenly available as the counsel for the defense in the case. The trial takes place just as Peter goes in for surgery, and the course of the surgery plays out over the back and forth of the trial.

Oh, this is great stuff. I mean, really, this is the sort of story that movies were invented to tell. Powell and Pressburger are brilliant in their use of the camera and of color. We always know precisely where we are, because the real world is in brilliant Technicolor and the afterlife is always depicted in black-and-white. Frequently, the scene dissolves from one to the other to show us the transition between worlds.

Another conceit here is that every time Conductor 71 appears in the real world, time stops. This means that frequently, there is something going on that suddenly freezes. This is most effective when he shows up for a visit while June and Dr. Reeves are playing ping-pong. Later in the film, it’s evident that the actors are merely frozen in place and doing their best not to move or blink. There’s a little bit of movement from some of them, and in a few shots where June is looking in on the surgery that it’s evident she is breathing. But I don’t really care. In general, the actors hold their positions nearly perfectly, and in general well enough to foster the illusion that they really are frozen in time.

What really makes this film work is just how smart it is. Certainly the time-stop sequences are intended to be something that happens in the film’s reality…or are they? As it turns out, Peter most certainly does have a diagnosable medical ailment, and it’s certainly no coincidence that the lifesaving surgery happens at the exact same time as the trial. It’s also no accident that the judge of the trial is played by the same actor (Abraham Sofaer) as the doctor performing the surgery.

I would be remiss if I didn’t mention Raymond Massey as Abraham Farlan, the counsel for the prosecution. In the context of the film, Farlan was the first man killed in the American Revolution, and he harbors an intense hatred for all things British. He plays the role like an actual trial attorney, with a thinly disguised malevolence based on his opponent’s place of birth. It’s great stuff to see him get worked up over a young girl from Boston daring to be in a relationship with one of those sneaky guys from the British Isles.

Really and truly, this is a glorious piece of film. This is the sort of film to get lost in, one to cuddle up with a sweetie and watch under a blanket with a glass of red wine and a plate of cubed cheese and crackers. It’s sweet and endearing and yet philosophical, entertaining but still addressing large issues, and yet plainly personal at the same time.

I’ve been rightly impressed with a lot of Powell/Pressburger films, but at the moment, I can’t think of one (…maybe Black Narcissus) that I enjoyed—I mean really just enjoyed watching—more than this one. It’s films like this one that makes watching based on a list completely worthwhile.

Why to watch A Matter of Life and Death: Pure magic.
Why not to watch: You’re dead inside.