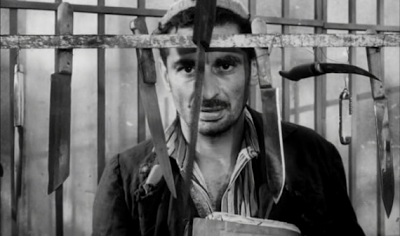 Egypt is a country with a strange identity. It’s an African country that most people don’t think of as an African country. It’s far more easily identified as an Arabic country, but there’s something Western about it as well. Bab el Hadid (alternately called The Iron Gate and Cairo Station) takes place in Cairo, and it presents an interesting blend of Arab and West in pursuit of a story that quickly becomes dark and then gets darker.

The owner of a newsstand in the train station in Cairo takes pity on a mildly crippled man named Qinawi (director Youssef Chahine), giving him a job selling newspapers around the station. This handicap, and his threadbare existence make him less than attractive to the many women who also work in the train station, but this doesn’t stop him from being filled with desire for them. In particular, he is obsessed with Hanuma (Hind Rostom), a woman who illegally sells cold drinks to train passengers (illegal because it takes business away from the man who runs the concession stands).

Sadly for Qinawi, Hanuma is engaged to Abu Siri (Farid Shawqi), who works in the station as a porter. He is currently trying to start a union of the other porters so that they can earn a decent living (and so that he can marry Hanuma). Desperate for her love and attention, Qinawi, who fills his living space with pictures of scantily-clad women, proposes to Hanuma, offering her a gold necklace. She rejects him, not only because of Abu Siri, but also because she is uninterested in the life Qinawi offers her.

And suddenly, things get dark. While all of this is going on, we have reports of a serial killer in the area. This killer slices up women, dismembering them, and storing their bodies in packing crates. This gives him an idea—if he can’t have Hanuma, no one will have her. He buys a knife for himself and arranges to meet Hanuma in a warehouse where her crate that will be used for her trousseau is being held. Unknown to him, Hanuma sends a different person, and Qinawi slashes her and stuffs her into the crate.

There isn’t much after this except the discovery of the crime, the various accusations, and the conclusion of what happens to the victim, Hanuma, Abu Siri, and especially Qinawi.

It seems that lately I’ve been watching a number of both domestic-style dramas and films in which obsession plays an important part. In some ways, Bab el Hadid is the most streamlined and intense of them. It is certainly the shortest of these films, and still manages to complete the build up from initial contact between our two characters through the obsession to the necessary ending.

Much of the film trades on the performance of director Chahine, who is singularly believable in his role as Qinawi. It would be simple for this character to quickly become a farce or something so extreme that couldn’t be believable. Instead, Qinawi’s descent into madness is natural and believable at every step, and more disturbing because of it.

In many ways, though, the most interesting character is Hanuma. Initially, she is coquettish, even around Qinawi, because she likes the attention. Hanuma is blatantly sexual, often showing a good deal of skin or a lot of leg as a way to gain more customers for herself. Eventually, Abu Siri warns her about Qinawi’s mental state and she gets a little more guarded, but still seems to be teasing him at times. This leads to a moment near the end when it’s evident that Qinawi is talking about the two of them getting married and she is talking about her impending marriage to Abu Siri, which leads to even more difficulties between the two.

But what this means is that at times, Hanuma almost seems like she is asking for the problems that come up. She isn’t, of course, but she does appear to be tempting fate and specifically teasing Qinawi in a sexual manner specifically because she enjoys the idea of the power she holds over men. It doesn’t make what eventually happens any more palatable, but it lends a strange sense to everything that happens.

I can certainly understand why Bab el Hadid was banned in Egypt when it was initially released. I can also fully understand exactly why this film is held up as a true classic. This is harrowing stuff, and seems to presage films like Peeping Tom, Psycho, and even Repulsion for its look at obsession mixed with madness.

Why to watch Bab el Hadid: A disturbing descent into madness.
Why not to watch: There are moments when it seems like Hanuma kind of deserves what happens.