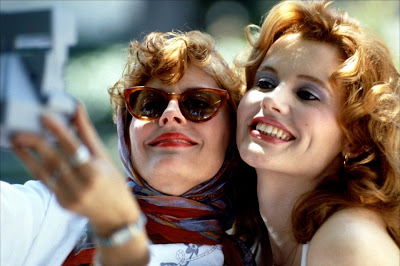 For the past year, on the last Tuesday of the month, I’ve put up a review of a film that I hadn’t seen but really should have at this point in my life. This was a part of Ryan McNeil’s Blindspot idea, asking bloggers to catch up on great, classic films of the past that we’re a little embarrassed that we hadn’t seen yet. I’ve seen some good ones this year, and I’m a much more complete film viewer. Now, I admit that all of these films were on my list anyway, so I’d have gotten around to them, but having that slight amount of structure has been fun. This month, though, the last Tuesday is Christmas, and I’m not watching a movie on Christmas. Instead, I’m doing this a day early. And that’s why, between last-minute shopping, a little wrapping, and getting the kitchen ready for tomorrow, I watched Thelma & Louise.

In a nutshell, bored and downtrodden housewife Thelma (Geena Davis) and her street smart and world-weary friend Louise (Susan Sarandon) plan a weekend trip, at least in theory going fishing at the cabin of a friend of Louise. On their first night out, they stop at a bar where Thelma drinks a little too much and dances with a guy named Harlan (Timothy Carhart). When Harlan gets a little too frisky and tries to rape Thelma, Louise responds by shooting Harlan in the chest. The women flee, trying to figure out what to do.

They go to Oklahoma, where Louise has arranged with her boyfriend (Michael Madsen) to wire her money, and she’s surprised when he shows up instead. Meanwhile, Thelma hooks up with J.D. (Brad Pitt), who shows her a good time and then steals all of the money Louise has collected. This forces the duo into a life of crime, with Thelma leading the way holding up convenience stores, which eventually leads to a spiraling swath of destruction. Meanwhile, the duo are pursued by a detective named Slocumb (Harvey Keitel), who wants to bring them in. Everything comes to a head at the Grand Canyon, with one of the most memorable and well-known film endings ever made.

Thelma & Louise is naturally seen as a feminist film, and it’s really hard to look at it as anything else. It does, after all, have a lot of feminist touchstones as well as female main characters who aren’t merely there as backdrops for the men. It’s the women in charge here, even if they are only somewhat in charge of their own destinies and very little else. Because of this, because we have women who are bucking the system and thus the male-dominated power structure, feminism is the first natural place to go. Leaving it there, though, sells the film short.

See the real genius of Thelma & Louise is that it’s a road picture and an action movie in addition to being a feminist statement. And it is these things. The real reason this is a feminist statement and a feminist vision is that it needs surprisingly few tweaks (perhaps only the initial attempted rape into a different crime) to make this a film about two guys suddenly in over their heads in a life of crime. In other words, this is not so much a film about two women who react to an intolerable situation as it is about two people doing the same. Again, aside from the attempted rape, there’s nothing in particular that makes this specifically a film about women.

Evidence for this? Thelma & Louise was a huge crossover hit when it came out, attracting an audience that wasn’t defined by gender. Now, it’s entirely possible that men liked it for different reasons than women did, but men certainly liked this film when it was released. That it is told from a view sympathetic to women in a situation where men are the bad guys is evidence of the story’s strength.

If there is something wrong with the film, it’s that it isn’t quite sure what it wants to be. It moves from genre to genre, offering moments of comedy, terror, action, romance, crime, and even police procedural back and forth. It could stand more focus.

This lack of focus, though, does allow for us to see more than just our title characters on the run. One of the better parts of the film is how much time we get to spend with Slocumb as he pursues the two women. The film is smart for this. We’re already sympathetic to the duo, and as the story progresses, Slocumb starts to become sympathetic to them as well. It’s not enough that we know the level of their guilt; it’s important that someone in the context of the film knows as well.

I’m sure there are other films that followed (or proceeded) in the footsteps of Thelma & Louise, but none that had this level of impact. If you haven’t seen it, don’t wait as long as I did. It won’t change your world, but it might give you a new perspective on what an action movie can be.

Why to watch Thelma & Louise: Because women can kick some ass without being oversexualized.
Why not to watch: It’s more unfocused than it should be.