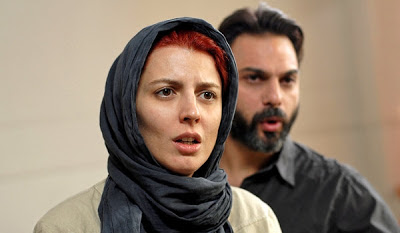 For a brief time in my life, I was working on a Master’s in linguistic anthropology. One of the requirements was to take at least one class in each of the four main branches of anthro—linguistic, cultural, physical, and archaeology. I gravitated toward linguistic, naturally enough, but I liked cultural and archaeology as well. What consistently struck me about cultural anthropology was that despite many vast differences between cultures, there were also a number of similarities. This, more than anything, is the lesson I took from Jodaeiye Nader az Simin (A Separation).

The initial question for a film like this for a Western audience is “What does divorce look like in the Muslim world?” The stereotype, naturally is that Islamic women don’t have anything like the same rights and privileges afforded to women in Western democracies. Is this true? I honestly don’t know, but Jodaeiye Nader az Simin makes a pretty compelling case that a lot of what we’ve been told about life in Iran isn’t exactly the gospel truth. We start with our troubled couple, Nader (Payman Maadi) and Simin (Leila Hatami). They have received their visas to leave the country after a long wait and have only 40 days remaining on them. Simin is desperate to leave the country, particularly for the fate of her young daughter, Termeh (Sarina Farhadi). However, Nader refuses to leave because his father (Ali-Asghar Shahbazi) has been diagnosed with Alzheimer’s disease.

This all seems simple enough, but it doesn’t stay simple. Nader hires a pregnant woman named Razieh (Sareh Bayat) to care for his father while he is at work. It’s unclear initially if he knows about the pregnancy, which becomes important as the film plays out. Returning one day, he sees his father tied to his bed and in great physical distress and Razieh nowhere to be seen, and he discovers some money missing from his apartment as well. We’ve already seen that she has issues with this job, as the father has gone wandering into traffic at one point. Incensed, Nader pushes her, and Razieh suffers a miscarriage.

And even then it continues to knot up. Razieh’s husband Hojjat (Shahab Hosseini) is hotheaded, depressed, and unemployed and immediately begins court proceedings against Nader. Nader counters with his own case against Razieh. Simin feels unable to leave the country because Termeh is embroiled in the entire situation and is now having trouble at school. And of course, there is still the impending divorce. As event piles on event, it soon comes to light that almost no one in this situation is being completely honest about anything.

It’s easy to focus on the vast differences between American and Persian culture. The legal system is vastly different for one thing, and this can be jarring initially because it is nothing like what we see in American films and television. The clothing, at least on the women, is also vastly different from a Western norm.

But the story is not. Yes, the details are certainly different. The divorce proceedings are not what we might expect, for instance, but the people are instantly relatable despite the vast cultural divide. While Hojjat’s motivations are perhaps the most foreign, it’s not because of culture but because of his ferocious temper and inability to control himself. We instantly get why Nader acts the way he does and feels the way he does. We can sympathize with Termeh’s situation of being torn between her parents in this situation. Razieh’s actions, just as morally vague as anyone else’s, are just as clear and understandable.

Because of this, because the situation is so human and real, Jodaeiye Nader az Simin is a harrowing film emotionally. I’m put in mind of similar intense family dramas like Kramer vs. Kramer and Ordinary People as films that relate these tightly-wound, powerful domestic situations in which there are no obvious solutions and in which every player is fully, humanly real.

Ultimately, what makes Jodaeiye Nader az Simin work is that it takes a situation that becomes extreme and spins wildly out of control but keeps it relatable. While the situation becomes intense and certain revelations are surprising, I never felt like the actions of the characters were unbelievable or outside the realm of what we came to learn about them.

This is the first film I have seen from director Asghar Farhadi, and my reaction to it is mixed in only one sense. It is a brilliant piece of cinema from start to finish, and I will watch other films of his that I come across. But, at the same time, I feel almost as I do about Aronofsky. This is not a pleasant or fun film to watch, not one that I can conceive of wanting to see again in the near future. However, I recommend seeing it without reservation.

Why to watch Jodaeiye Nader az Simin: Because regardless of culture, some stories are the same everywhere.
Why not to watch: If you’re a nationalist, you may have trouble watching Iranian cinema.