Film: The Sound of Music
Format: DVD from Rockford Public Library on laptop. 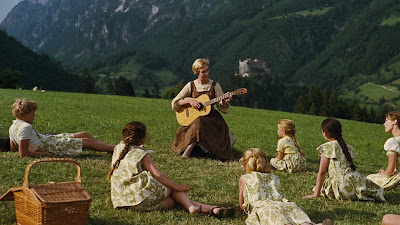 You should know off the bat that I really hate The Sound of Music. I hate every glurge-soaked moment of this film, every over-eager, exaggerated expression of joy and forced laugh, every sugary, syrupy song, every gloppy, saccharine frame of this celluloid diabetic coma. I reserve the right to root for the Germans in two films: Das Boot and this one. I’m saying this at the top because obviously these opinions are going to dramatically influence what I have to say in the paragraphs to come.

Maria (Julie Andrews) is attempting to become a nun in an Austrian convent, but she’s far too much of a free spirit. Instead of staying at home and being penitent, she’s compelled to run off to the mountains and traipse around singing about how those mountains are filled with music. Of course they’re filled with music; she’s running around singing. When she comes back, she finds the nuns singing about how they should solve a problem like her. I have a suggestion. It involves a garrote made of piano wire.

Anyway, Maria is sent off to become the governess of the Von Trapp children in Salzburg. The father, Captain Georg Von Trapp (Christopher Plummer) runs the house with military precision. The seven children, from oldest to youngest are Liesl (Charmain Carr), Friedrich (Nicholas Hammond), Louisa (Heather Menzies-Urich), Kurt (Duane Chase), Brigitta (Angela Cartwright), Marta (Debbie Turner) and Gretl (Kym Karath). The kids play a couple of pranks on Maria who responds with 1960s musical-level pluck and verve. Eventually, she wins the kids over by covering for Liesl’s romp with telegraph boy and wannabee Nazi Rolfe (Daniel Truhitte) and by singing about kittens and snowflakes when all of the other children are unaccountably terrified by a thunderstorm. Captain Von Trapp goes off to Vienna to visit his current flame, and Maria takes advantage of this sudden freedom by making them froofy clothing out of her old drapes and teaching them to sing.

I want to mention the clothing specifically. Five of the children are girls, and the clothing that rather magically fits them perfectly looks fine on them. Kurt gets a shirt made of the material, and it’s…a little fancy, but not terrible. Poor Friedrich, though, gets stuck with something that looks like pastel fleur-de-lis lederhosen that are embarrassing.

Anyway, Von Trapp brings back his baroness/wife-to-be (Eleanor Parker) and friend Max (Richard Haydn) and comes to the point of booting Maria when he discovers his children’s new clothing (I like to imagine it’s because of Friedrich’s clothes), but relents when he hears the children singing. The kids then perform an expert puppet show with about sixteen thousand puppets. Max wants them to sing professionally for him, and the Captain refuses. Eventually, jealous of Maria, the Baroness gets her punked back to the abbey and sinks her Austrian claws into the Captain.

Ah, but Maria is full of pluck and verve and exists in a musical, so she decides to fight for her man. She leaves the convent and we get the happy bits that we want. And then there are Nazis and the return of the now-fully Nazi-ified Rolfe, and the singing Von Trapps running across mountains to make it to safety and out of Third Reich-ville.

Seriously, I hate this film. Everyone is so damn perky. So damn perky. Everything comes with the most extreme emotional reactions possible. The children, once Maria manages to calm them all down during the thunderstorm, are constantly in a whirlwind of nanny-induced ecstasy in which every moment is filled with sunshine and whiskery kittens and Skittles for everybody. Captain Von Trapp is a blowhard douchenozzle until he suddenly becomes SuperDad.

Honestly, it’s not even the fact that this is a musical that drives me batty—it’s the attitude of pretty much everyone in the film. Of course, that attitude comes from the fact that this is a musical, so I guess if I try to find the source of my loathing, I’ll end up chasing my tail. I’ll admit that some of the songs are pretty good. But really, does anyone care about “The Lonely Goatherd”?

It’s not hyperbole to suggest that this is one of the films that I’ve been dreading revisiting since I started this project, because I know precisely how much I dislike it. In fact, I think a good deal of my dislike of musicals stems from being forced to watch this at a relatively early age. It’s so overly emotional, so forced, that I have real issues with taking it seriously. The children are too damn happy. I was never this constantly happy as a kid. No one I know was ever this constantly overjoyed with everything. It’s so extreme in this way that I have trouble remembering that it was based at least in part on a real story.

But hey, at least it’s done.

Musical lovers will find everything here to love, and people who don’t like musicals will hate virtually every frame. In many ways, The Sound of Music is the purest musical ever made, either the pinnacle of the (climb ev’ry) mountain or the deepest pit. I understand why people who love musicals love it, and I really despair of making them understand why I really hate it. I get it, but I just don’t get it. I promise to lay off if you Von Trapp fans will promise not to make me live through it again. Deal?

Why to watch The Sound of Music: It’s a bona fide classic of the musical genre.
Why not to watch: You’re at risk for contracting diabetes.