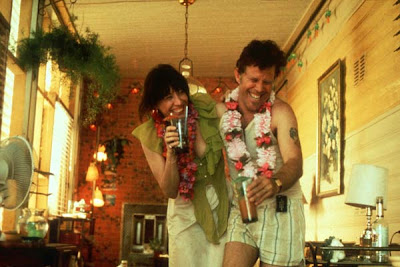 I’ve been making a concerted effort for some time to get through the longest films on the list. Specifically, as much as possible, I’ve tried to hit two very long films (at least) every month. This has gotten me to a place where I have only two films of longer than three hours left. One of these is Robert Altman’s Short Cuts. This marks the fourth time I’ve check this film out from the Rockford Library. I just can’t get into it. I’ve seen the opening 10 minutes at least four times now, and I just stumble every time. I’m not exactly sure why this is. It might be that I have issues with Altman sometimes. His films are long and rambling and feature massive casts. Maybe it’s something more specific about this film. I’m not sure. But anyway, there it is. I have long had a mental block when it comes to Altman’s Short Cuts.

Part of the reason is probably that Altman’s films are difficult to summarize, and I’ve put myself in the position of summarizing the films I watch as a matter of course. This film, though, has such a large cast with so many interconnections that to adequately define everything and everyone would take nearly as long as watching the film itself. There’s just too dang much. To put it simply, Short Cuts is based on the writings of Raymond Carver. It is a slice of the lives of a couple of dozen people, all intertwined and interconnected in various ways. In a lot of ways, a film like this is the natural parent of something like Crash or the less well-known 11:14 (you’re welcome, Nick), in that it shows how each live touches others and all of our lives are connected, however tenuously.

I’ve said it has a major cast, so I’m going to burn through as much of this as I can as quickly as I can. Tess (Annie Ross), a jazz singer, and her daughter Zoe (Lori Singer), a morose cellist, link all of the stories together through musical interludes. They live next door to the Finnigans (Bruce Davidson and Andie McDowell), whose son (Zane Cassidy) is hit by a car driven by Doreen Piggot (Lily Tomlin). Doreen is married to Earl (Tom Waits), an alcoholic limousine driver. Their daughter Honey (Lili Taylor) is married to Bill Bush (Robert Downey, Jr.), who gets off on sadism. They like to party with the Kaisers (Chris Penn and Jennifer Jason Leigh). Lois Kaiser works as a phone sex operator and talks dirty in front of the kids, which also makes her pretty blasé when it comes to sex. Jerry Kaiser cleans pools and has a number of customers, including the Finnigans.

Deep breath. The accident with young Casey Finnigan is compounded when his parents fail to pick up his birthday cake, enraging a local baker (Lyle Lovett). Howard Finnigan’s father (Jack Lemmon) shows up at the hospital to confess his previous marital infidelities. Doreen Piggot serves breakfast to Stuart Kane (Fred Ward) and his two friends (Buck Henry and Huey Lewis), who go on a fishing trip and discover a dead body, which they leave in the river until their fishing trip is over. This appalls Stuart’s wife Claire (Anne Archer). The Kanes are planning a dinner with the Wymans (Matthew Modine and Julianne Moore), who are having marital problems. Marian Wyman is the confidant of her sister Sherri Shepard (Madeline Stowe), whose corrupt cop husband Gene (Tim Robbins) is cheating on her with Betty Weathrs (Francis McDormand), who is separated from her helicopter-flying, pesticide spraying husband (Peter Gallagher).

Whew. I’m almost certain I’ve forgotten something, but can you blame me?

The whole point of Short Cuts is less about a specific plot or getting us to a particular point and more about simply showing the interaction between the lives of the characters. A great deal of the film is naturally focused on the performances, and Altman (as usual) manages to pull together a large amount of talent here, or at least a lot of people who went on to become real talents in the industry.

Short Cuts is all about the messiness of everyday life, the stories behind the stories that we see. In our world, we see (really) only our own stories and parts of the stories of other people when they interact with us. This film is about showing us the rest of those stories, the other sides of what really happens. The anger one character feels is understandable, but would be meaningless if he or she knew what someone on the other side of the confrontation was going through. It serves as, more or less, a reminder that we are all living these human lives in isolation together.

The problem is that I don’t really care that much about this film or these characters. I’ve enjoyed a number of these messy, rambling Altman films in the past, but this one comes up short for me. It feels like a week out of a soap opera, without resolution or even a stopping place. Instead, there is a cutting off point where we just run out of things to talk about for now. The characters’ lives go on, and we don’t get to tune in. A soap opera indeed, albeit one with a stellar cast.

And that’s my other gripe. There are so many talented people involved in this film and we get so many of them for such a short time. I love seeing Jack Lemmon in anything and here, he shows up for a cup of coffee and is gone. It’s a tease. We get so many characters (too much information) and not enough of any of them to care that much (not enough information). And so, Short Cuts is always a film that simultaneously offers too much and not nearly enough, and takes three hours to do it.

Edit: Should you rent this, turn on subtitles. It comes complete with a bouncing ball for the songs, which is completely awesome.

Why to watch Short Cuts: A great ensemble cast.
Why not to watch: It’s hard to care.