Film: Hannah and Her Sisters
Format: DVD from Rockford Public Library on laptop.

I like Woody Allen. I know his personal life is strange and a little creepy, but I really don’t care that much. The man makes a lot of really good films. He’s also remarkably consistent, putting out about a film a year for as long as I can remember without too many misses. Sure, when Allen is bad, he’s really bad. When he’s self-indulgent, he’s really self-indulgent. And when he misses, he misses big. But I respect that, too. When he misses, it’s because he’s swinging for the fences. Even when he doesn’t hit a home run, he still manages to get safely on base. 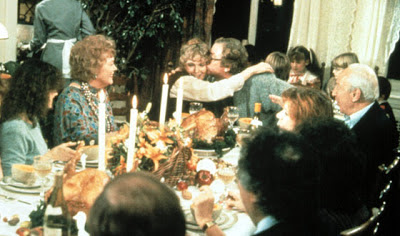 Hannah and Her Sisters is very Woody Allen. Even better, it’s very Woody Allen right in the heart of a string of some of his best films, back when almost everything he did came with multiple Oscar nominations. And with reason. His films were (and often still are) uniformly smart, funny, tragic, and poignant, blending everyday life, problems with relationships, and philosophical topics under one roof. This is one of the main reasons I like his films so much—they attempt a lot in one package, and often work on multiple levels very effectively.

Hannah and Her Sistersn features many of the players that Allen loved using in his films—Mia Farrow and Dianne Wiest in particular, and peppers the rest of the film with familiar names and faces (Michael Caine, Max von Sydow) and soon-to-be famous names (John Turturro, Daniel Stern, Lewis Black…yes, that Lewis Black).

As the title implies, the film tracks a couple of years in the life of Hannah (Mia Farrow), a successful actress, and her two sisters. Sister Lee (Barbara Hershey) and Holly (Dianne Wiest) have continually failed at things that they try, including a variety of relationships. Holly constantly borrows money from Hannah, in the past to fund her cocaine habit and now simply to survive. She has the idea of starting a catering business with her friend April (Carrie Fisher), who is also a romantic rival and a rival for various plays and commercials. Lee lives with a much older artist named Frederick (Max von Sydow), but is somewhat dissatisfied with the relationship, particularly with his inability to connect with anyone else.

Of course, since this is Woody Allen, the relationships between everyone are incredibly complicated and convoluted. For instance, we start at Thanksgiving with Hannah’s husband Elliot (Michael Caine) has fallen in love with Hannah’s sister Lee. Hannah is completely unaware of this, of course, but Lee has her suspicions, as does Frederick. We also learn about Mickey (Woody Allen), Hannah’s ex-husband, a hypochondriac who works in television. In truth, a great deal of the film is actually about Mickey, who has a brush with a serious medical issue and suddenly has a desire for a religious epiphany and starts god-shopping, which ultimately leads to a failed suicide attempt. Holly becomes interested in an architect (Sam Waterston), who is interested in both her and April, but is already married herself, leading to problems with the catering business and causing Holly to want to start a new career. And eventually, Elliot and Lee begin an affair, causing to disruption in Hannah’s life and intense guilt for the adulterous duo.

Hannah and Her Sisters is messy, but it’s the right kind of messy. It’s messy like real life is, and while events like the affair between Elliot and Lee may seem to stretch credibility a little bit, they really don’t—things like this almost certainly happen in the real world and do actually happen. Better, the characters, even many of the minor ones—are full realized rather than simply being people on the screen. They come across as variously talented in their own ways, but also variously screwed up in ways of their own making, just like real people.

Frequently, Allen allows his characters to offer interior monologues, and these are the real gem of this script. Mickey, as Allen’s alter-ego naturally has the most, but Elliot gets a number of them and Holly does as well. These come across not as exposition for the audience but as self-talk, the kinds of things that people actually say to themselves inside their own heads. At least most of them do. Mickey’s are ridiculously clever and contain some of Allen’s best writing. My favorite moment—the one at which I actually laughed audibly—is when he mentions Nietzsche’s idea of eternal recurrence, in which everyone experiences their life over eternally, which means he’d have to sit through the Ice Capades again.

This is great stuff. It’s funny and sad and tragic, petty, painful, and even uplifting. I still think Radio Days is my favorite Allen script, but Hannah and Her Sisters certainly ranks in the top echelon of his writing, and near the top in his direction as well. If you’re a fan, you have no reason to dislike this. If you’re not, you have bigger problems than disliking this film.

Why to watch Hannah and Her Sisters: No one uses voiceover as well as Woody Allen, and even he rarely uses it this well.
Why not to watch: If you don’t like Woody Allen, few movies are this Woody Allen-y.