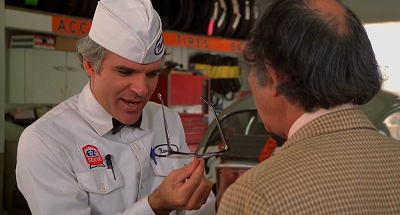 When Steve Martin is good, he’s really, really good. He’s not someone who works well with bad material, though. Steve Martin’s bad movies are really, really bad, not even “so bad they’re good” bad. Ask anyone who’s seen Sgt. Bilko; they’re unwatchable. But with good material, Martin is a decent actor with great comic timing. He rises or sinks to the level of what is written for him. This makes The Jerk interesting.

The Jerk is Martin’s first major role, and his first film role in general excepting a part in the excremental Sgt. Pepper’s Lonely Hearts Club Band and a couple of moments in The Muppet Movie. It’s a dumb movie, filled with stupid humor where what is said or done is just off-kilter from what is expected. It works because Martin is funny and charming and it works at times in spite of itself. But mostly, it demonstrates that Martin is capable of being funny and silly and strange and endearing on film. It’s not really that much of a surprise, since a good deal of the script was written based on parts of Martin’s acclaimed stand-up act.

Navin R. Johnson (Martin) is the adopted son of Mississippi sharecroppers and despite the obvious and distinct racial differences, he is unaware that he is adopted. There are other differences, too. He can’t seem to find the rhythm of spirituals, traditional songs, and blues. He prefers tuna fish with mayonnaise to collard greens. Discovering his ethnic roots puts him on a quest to see the wider world, so he hitchhikes away from home to see the wider world.

Part of that wider world comes at a gas station run by Mr. Hartounian (Jackie Mason) where Navin takes a job. Hartounian gives him a place to live in the back of the station, and soon after, Navin is excited to see that he is listed in the phone book. He’s also, based on the phone book, immediately targeted by a psycho (M. Emmett Walsh) who wants to kill him. Navin is forced to flee and winds up travelling with a carnival. Here he hooks up with motorcycle daredevil Patty (Catlin Adams) who rather brutally instructs him in sex (which Navin calls his “special purpose”).

Navin leaves the carnival with Marie (Bernadette Peters), but she leaves him when she realizes that Navin is clueless, naïve, and not very ambitious. She comes back to him when Navin becomes wealthy from an invention he whipped together for a customer at the gas station. The device is a handle placed on eyeglasses to allow for easier removal. It makes Navin a millionaire overnight. However, because of his naivety, he is a sucker for every sob story and weird charity that comes knocking. The bottom drops out when he is sued in a class-action suit; the “Opti-Grab” causes wearers to become cross-eyed.

Of course, this is a comedy, and so everything works out in the end, and does so in a way that actually follows the plot but is still pretty silly. That’s okay, though. Anyone going into this one expecting for everything to make perfect sense is in the wrong place.

There’s a lot to love in The Jerk, most of it being particular lines or scenes. The attack of the crazed gunman on the gas station, for instance, could easily be disturbing in the environment of school and movie theater shootings. Here, though, it’s handled perfectly. The gunman isn’t a very good shot, and starts plinking cans of oil near Navin. Initially, Navin determines that the cans are defective. Then, once he sees the shooter, he believes that the target is not him, but the cans, and everywhere he runs to get away, he finds himself near cans that become the next “target.” The Thermos Song still gets sung in my house from time to time, and not always by me. It’s funny stuff.

It’s not a perfect film, though. Not all of the jokes work, but that’s par for the course with any comedy. It wears out the premise before it’s done, too. In a lot of ways, The Jerk is a raunchier, adult version of Pinocchio, since Navin is such a naïve that he’s beyond comprehending his own naivety. The film doesn’t really drag, it just gets stale. I also tend to think that Bernadette Peters is actually Madeline Kahn, and I’m always a little let down when she isn’t. This isn’t a knock against Peters, who is quite good here. I just really like Kahn and I compare Peters to her unfairly.

Ultimately, though, Steve Martin is better in other films. L.A. Story and Roxanne, for instance, are better films, consistently funnier, and funnier on more levels than The Jerk is. For comedy in general, and for Steve Martin comedy in particular, though, you could certainly do a lot worse.

Why to watch The Jerk: Steve Martin in his prime.
Why not to watch: Roxanne is a better film.