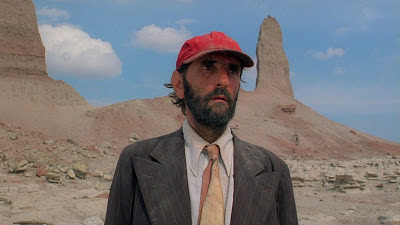 There is a dreamy quality to the work of Wim Wenders. In a film like Der Himmel Uber Berlin, this quality is so evident as to not really need to be mentioned. With Paris, Texas, it’s much less apparent, but it’s still there. This is a slow film—I’ve seen slower, but not many that are this methodically pleased with themselves to take a long time to get to the intent. For me, it’s a huge help that Harry Dean Stanton is front and center and on camera for the bulk of the film. Roger Ebert once penned the Stanton-Walsh rule, which states that with the exception of Chattahoochee, no film that has M. Emmett Walsh or Harry Dean Stanton in a support role can be all bad. Paris, Texas is an indicator that in Stanton’s case, he can include lead roles in that.

A man (Stanton) walks through the desert, and it’s somehow evident that he’s in or near Texas (although that might well be the name of the film). He finds a bar and collapses inside. We switch to Walt (Dean Stockwell), who is evidently the man’s brother. Walt, who lives in Los Angeles, flies down to Texas (see! I was right) to get his brother, who is named Travis, but the silent brother has disappeared. Walt tracks him down and tells him that he’d like to take him to Los Angeles. Eventually, Travis speaks. We learn that he has a child named Hunter (Hunter Carson, the son of one of the screenwriters) and that he refuses to fly, so instead they drive.

Slowly, the story unfolds. Travis was once married to a woman named Jane (Nastassja Kinski), but something happened. Travis vanished for four years and soon after Jane turned their child over to Walt and his wife Anne (Aurore Clement). Travis slowly comes out of his shell and begins to develop a relationship with his son, and learns from Anne that Jane regularly makes bank deposits in an account for Hunter on the same day every month in Houston. And so, looking to put everything back together, Travis heads off to Houston with Hunter in tow to find his missing wife and see if the life he once had can be rebuilt.

Wenders does a lot in this film with silence, particularly in the performance of Stanton. Even though Travis eventually talks and talks at length by the end of the film, there is a sense that using language is difficult for him because of his years of wandering without seeing other people. Travis is a terribly broken individual, a completely shattered person, and so too is Jane when we finally meet her. It’s difficult to see which of them has suffered from the slings and arrows of life more, or which did more self-inflicted damage to themselves and their relationship.

The landscape is almost a character in this film as well. Travis, it turns out, has purchased a vacant plot of land in Paris, Texas (hence the name of the film) with the intent of moving himself, Jane, and Hunter there. His reason is that in his mind, it is where his parents met and where he was conceived—going there, in his mind, is very much getting back to his own beginning. What he discovers as the story goes on is that the life that he once had is quite possibly gone. The landscape reflects this, often showing desolate places, and old, discarded items that once had value and no longer do. It’s beautiful stuff and also very tragic and sad.

Paris, Texas is almost the perfect definition of a slow burn, except that there really isn’t a burn here. It’s just a story that takes a long time to unfold. But it makes perfect sense; everything comes slowly because Travis needs it to come slowly. It works not at the pace we may want, but at the pace that Travis needs it to.

It’s a special film. I can very much see someone watching this and quickly becoming frustrated with it and with Travis as a character. He doesn’t seem to really need anything, but only to want things that he once had, and it takes him (and thus us) a very long time to get there. But I like this pace here because it makes sense for everything to expand into a full narrative.

The climactic scene, the final meeting between Travis and Jane is absolutely gutting. I won’t go into detail, but it’s all long takes and pure emotion, and it’s damn good. A large part of this comes from the realization of what Jane now does for a living. She works in a peep show booth, performing at the whims of men who sit behind mirrored glass so that they can see her without her seeing them. One of my favorite moments here is when we finally get to see this set up from her perspective. From his, she is in a mock-up of a coffee shop, which I suppose for certain people might make a sort of fantasy porn scenario. From her point of view, though, there is a large central mirror surrounded by open insulation—it’s not worth the expense of even finishing the drywall for the performers. It’s a great breaking of even this small, tawdry fantasy.

Anyway, I completely dug this film. I can’t recommend it without reservation because of the pace and the way these characters are, but I can say it’s worth trying.

Why to watch Paris, Texas : There isn’t much of anything like it.
Why not to watch: If you don’t like slow, you really won’t like this.