Film: The Seventh Victim
Format: DVD from NetFlix on laptop.

I lke films that bear the stamp of Val Lewton, or at least I like the ones I’ve seen. There’s a particular vibe to the films that Lewton produced, and idea that strikes me as odd. Typically, I look at films and not the hallmarks of particular directors or actors. With Lewton’s films, though, the director and who is starring feel much less important. It’s Lewton who comes through. 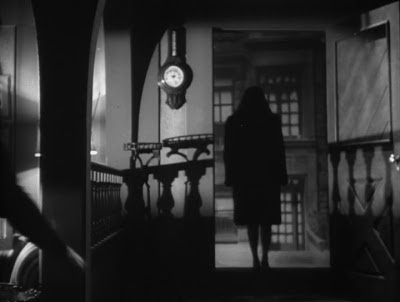 One of Lewton’s signatures is thriller films that imply much more than they show. Cat People, for instance, does a lot with a few shadows and some sound and not much else—the joy of intelligent direction on the cheap. The use of light and shadow, the lurid, often sexual topics—these are Lewton’s most commonly reference hallmarks. However, for me, the most telling thing about a Val Lewton film is that those that I have seen typically focus on a woman who is tied to a terrible fate that she cannot get beyond. Often there is another woman who has a larger role in the film, acting as an observer on the tragedy of the woman who is the central focus. This is certainly the case with The Seventh Victim.

For people more accustomed to modern horror and thrillers, this film will hold few charms, because like traditional Lewton, there is no gore, no special effects, and not much in the way of shock moments. Mary Gibson (Kim Hunter) is at a boarding school and is called in to speak with the headmistress. It seems that Mary’s sister Jacqueline (Jean Brooks), who typically paid Mary’s tuition, has vanished and not paid for six months. Offered the choice of leaving school or staying on and working, Mary opts to leave to look for her sister.

What she finds instead are leads. She learns that Jacqueline sold her business to an employee named Mrs. Redi (Mary Newton) and vanished. The trail eventually ends up at an Italian restaurant where Jacqueline had been seen. As it happens, Jacqueline had rented a room there, but almost never showed up. When Mary looks inside, she finds it furnished by two things: a chair and a noose. Now quite disturbed, she reports her sister as a missing person and meets (over some time) with a quartet of men who take an interest in the case.

One of these men is Gregory Ward (Hugh Beaumont), who claims to have been in love with Jacqueline and later confesses to having married her. Another is Jason Hoag (Erford Gage), a failed poet who seems to take an immediate interest in young Mary. Third is Irving August (Lou Lubin), a private detective who agrees to help Mary as a personal favor, and who quickly pays the ultimate price for his curiosity. Finally, there is Dr. Louis Judd (Tom Conway), a psychiatrist who knows where Jacqueline is hiding and who knows quite a bit more as well.

The character of Jacqueline hangs like a specter over the entire film despite her appearing only for a few seconds in the first forty minutes or so. Every scene is infused with her—discussion of her, searching for her, talking about her. When she does appear, there’s a sense of relief that immediately turns to frustration when she disappears just as suddenly and without saying a word. After this, we learn of Jacqueline’s involvement with the Palladists, a Satanic cult no doubt named after Pallas Athena, goddess of wisdom. Many of the people we have seen, particularly Mrs. Redi, are members. See, this is the lurid stuff that gave a film that Lewton touch.

I won’t go any further, since the last half of the film is the sort of shock value joy that makes a film like this one more fun than its premise. Suffice to say that there are people falling for each other and some frustrated romance, and that’s the tame stuff. Assassins, devil worship, suicide attempts, and more all culminate in one of the single greatest moments of Foley work I have ever experienced—no hyperbole. It’s an ending you won’t be sure really happened until several minutes after it happens.

While I enjoyed this film, I think it’s the least of the Lewton films I have seen. It opts much more for a thriller vibe than the pushes into horror of some of his earlier films. In some ways, that’s almost a growing up for him, but it’s also a lessening of what made him really fun and interesting. Still, there’s a lot to like here, not the least of which is the debut performance of Kim Hunter on film. Even though this is focused in a different way than his other films, there are certainly horrific elements here. Early in the film, Irving August is knifed in front of Mary by an unknown assailant. Later, a shaken Mary rides the train around New York to calm down when a trio of men get into her car, two obvious drunks supporting a third, much drunker man between them. As the train lurches, we get a good look at the middle man and see that it’s the late Mr. August, whose body is being disposed of by the two men on either side. It’s a great shock moment.

If there's a real problem here, it's that the Palladists aren't really that scary or malevolent. In its own way, though, this is a genius move, since evil often is petty and silly. Great evil isn't of course, but that sort of theatrical evil focused on personal gain and personal pleasure instead of malevolence always is, and that describes the Palladists. It's perhaps disappointing, but it's also very, very smart.

If you’re fine with more subtle thrillers, ones that require you to put the pieces together yourself, you’ll find at least seven reasons to enjoy The Seventh Victim.

Why to watch The Seventh Victim: This film is far smarter than most will give it credit for.
Why not to watch: It doesn’t quite live up to its promise of evil.