Half an Hour in Hell 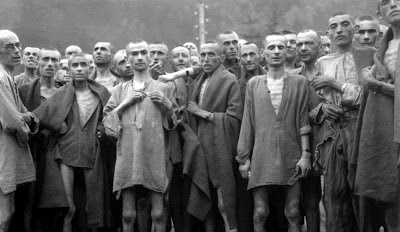 I’ve said before that there is probably no event of human experience more fully explored in film than World War II. When it comes to World War II, there is probably no event more extensively written about and filmed than the Holocaust. I have, over the course of this odyssey, seen more than my share of Holocaust-based films. None have been as brutal, as powerful, or as morally shocking as Alain Resnais’s Nuit et Brouillard (Night and Fog). Even the overwhelming emotional assault of Shoah cannot compare with the stark atrocity depicted in this film.

Really, I’m left with very little to say about this film. Most of us have seen some of the images of the gaunt stick figures, the shattered bodies, the skulls, the crematoria, but being exposed to them in the past is no inoculation against seeing them here. These images are, of course, of critical importance for anyone to see—they record one of the darkest and most evil times in human history, an industry of human slaughter designed only to kill as efficiently as possible. Even these, though, are not the truly awful images that stay with the viewer.

For me, the as upsetting as the images of emaciated corpses, their eyes open and mouths gaping might be, the most monumentally terrible moment comes when our narrator (Michel Bouquet) explains that the Nazis kept everything from the prisoners. We see a massive pile of spectacles, a stack of combs. And then we see hair, the hair of the female inmates shaved off upon their arrival to a camp. The shot pulls back, and still all we can see is hair. And it continues to pull back. We see what looks like a human figure in the picture, looking like nothing so much as a person climbing the side of a steep hill. This is an accurate representation, because when the camera finally finishes pulling back, we are left staring at a literal hill of hair, dozens of feet high and hundreds of feet around, the hair of thousands upon thousands of women piled up.

There is no single word for the flood of emotions—anger, fear, pain, sorrow, revulsion, pity—that hits upon witnessing this very human evidence of such a monstrous evil. There is no way to adequately put this emotional and mental outpouring of suffering, empathy, and existential pain into any words at all.

Resnais juxtaposes these terrible images with views of the concentration camps as they stand now, or at least as they stood when he made this film. Many of the buildings still stand, the crematoria now silent and looking for all the world like the fronts of simple factories. The barracks remain, now empty of people and empty of suffering. They are merely buildings now and look not unlike camp buildings, but only because there are no more anguished people inside. The camps are now filled with green grass and appear simply as abandoned complexes, no more sinister than an old factory.

Nuit et Brouillard is just over 30 minutes long, but contains within it a lifetime’s worth of horror. Despite its short length, I wanted to shut it off more than once, wanting to get away from the palpable suffering on the screen. But it’s also important to see it, to know that it happened, and to know that humanity is capable of this level of depravity.

The final moments of the film ask the real question: who is responsible? For an evil of this magnitude, perhaps no one can claim total responsibility and no one wants to claim even partial responsibility. Today, 70 years after this horror, assigning this blame is less important than simply knowing that this happened and knowing that it could happen again.

Nuit et Brouillard is a film that truly ranks as must-see. Everyone in the world should see this.

Why to watch Nuit et Brouillard: If you watch one Holocaust documentary, it should be this one.
Why not to watch: It is stomach-turning, both for its graphic images and because it was real.