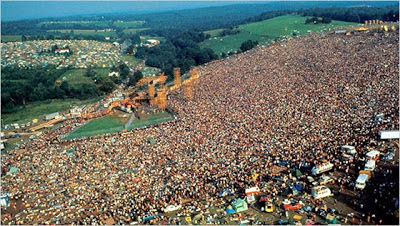 I try to keep a careful watch on my NetFlix queue so that I get a film I’m in the mood to see or one that fits my schedule. Imagine my chagrin when I realized that just after I finished watching Short Cuts, the second-longest film I had left, the next thing to show up was the full director’s cut of Woodstock: 3 Days of Peace and Music, a nearly four-hour documentary on the festival held in 1969. I shook my head and gritted my teeth, and thought that at the very least, it would be the last of the three-hour-plus movies.

Yeah. And once again, I need to learn to trust. While this is not a perfect documentary, it’s a really good one. I admit that I expected a lot of the music to wash over me, too. Some of it did, but not all of it. This is a smart, well-designed film that deserves to be put in the same sort of category as other well-regarded documentaries like Hoop Dreams. That it was edited in part by a young Martin Scorsese is just a bonus.

The editing plays hob with the actual order of the acts that appeared at Woodstock. Once we get to the music, it starts with Richie Havens, as the festival did and ends with Jimi Hendrix, which is also accurate. In between though, acts appear whenever and wherever they seem to fit. Penultimate act Sha Na Na (yes, really) appear early in the film. Most of the first day’s music is ignored in the film for whatever reason. Canned Heat, who performed on the third day, are placed right after Richie Havens here, in the first hour.

This is a fascinating film and surprisingly open about what it shows. Just after the first appearance of Country Joe on stage in the film, we get a montage of pot smoking, for instance. There’s free conversations with attendants about the open sex and drug use, and plenty of completely non-sexual nudity and stripping thanks to the massive rainstorm.

One of the smartest aspects of the film is that a great deal of it appears in split screen, showing often the same thing but from different angles. We see an act from the side as they perform and another shot from behind, showing the perspective of the stage looking out over the crowd. When Crosby, Stills, and Nash perform, the split screen focuses on one side on Stills and on the other with Crosby and Nash sharing a microphone, then suddenly sometimes putting all three into a single shot.

All of this is fine, but it doesn’t explain some of the decisions made with the music shown here. There are a number of bands who get some big play and others that are virtually ignored. For instance, while Jerry Garcia shows up to be interviewed, there’s not a note of Grateful Dead here. The Band is ignored completely, as are Johnny and Edgar Winter. Blood, Sweat & Tears played for an hour, but you wouldn’t know that to look at this film. Instead, we get two separate appearances by Country Joe MacDonald and a crapton of Jefferson Airplane.

I’m not sure how I feel about the closing section of Jimi Hendrix. I mean, I fully understand that Woodstock was the true apotheosis of Hendrix, the place and time where he was the most solidly Jimi Hendrix, and the performance that is the most defining of his career. But it’s like 20 minutes in the director’s cut. With a little less Hendrix, there’d be room for a Creedence Clearwater Revival song or 30 seconds of Ravi Shankar.

For me, the most interesting parts are the announcements throughout the film. For instance, when the U.S. Army shows up in helicopters to provide free medical attention to the crowd, the initial reaction from the crowd is a negative one. We get the announcement about staying away from the brown acid, the safety announcements to keep off the giant towers during the downpour. Some of these loudspeaker shouts are prosaic and almost cute, like the marriage proposal broadcast to the crowd.

I was a few months away from turning two when Woodstock happened. My parents were established with kids, and even though we lived relatively close (we were in New Jersey at the time), it was not the sort of thing a family of seven would do. I can say now that had I been of the right age at the time, I wouldn’t have gone. Not because of the music but because of the crowd. So much of this seems so miserable—the mass of people, the mud, the rain. Just not for me.

I’m glad I watched this. If you’re a fan of the music from the era, it’s a fair bet that you’ve already seen this. Even if you aren’t, it’s worth your time.

Why to watch Woodstock: 3 Days of Peace and Music: One of the best documentaries going.
Why not to watch: Some strange omissions of those who played the festival.