Film: Fires Were Started (I Was a Fireman)
Format: DVD from NetFlix on kick-ass portable DVD player. 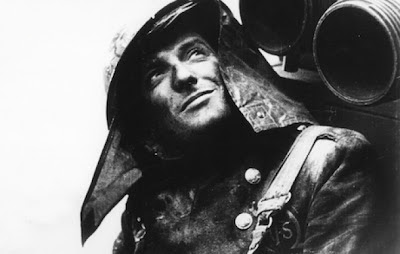 There’s always something fascinating to me about propaganda films, especially those that try to proclaim themselves something other than propaganda films. A case in point is director Humphrey Jennings’s Fires Were Started (also called I Was a Fireman). This is a wartime film, released during World War II about the Blitz of London and the men who risked their lives as firefighters every night in the aftermath of the latest raid. It’s not really a documentary, but rather a re-creation using actual fires lighted on bombed-out buildings. It’s more or less based on the specific hell these men and women when through on a nightly basis.

Really, what I’ve said above is pretty much the bulk of the film. The first half consists of a group of firemen relaxing and jawing with each other. They play pool and gather around the piano singing songs. This is particularly important since one of them, a man named Barrett, is new on the squad. The second half of the film is little more than the various firefighting teams heading out to battle the blazes caused by yet another bombing run. In particular, one fire threatens to be significant thanks to the location of live munitions near the blaze.

The film very much seems to be saying that these men are no less heroes than those who went and fought on battlefields. In many ways, in fact, the film depicts these men in just as desperate a struggle and one just as vital to the war effort. Certainly they risk their lives no less than men on the front lines do. Additionally, there is a sense of camaraderie here. Social lines are not simply crossed but become non-existent as people work for the common good at the risk of their own lives regardless of their pre-war stations in life.

But here’s the thing—despite the massive amount of acclaim this film (the only feature-length film of Jennings’s career), I couldn’t help but find it less than enthralling. Sure, there’s some tension in what might happen if the fire reaches ammunition, but even here, there is less excitement than there should be. Part of this is because I know this to be a propaganda film created in part to boost the morale of the British people.

In truth, I wanted to like Fires Were Started a lot more than I actually did. I think this is attributable to several factors working in conjunction. First, and most significantly, Fires Were Started is in desperate need of being restored. While the picture quality is decent in general, the sound is frequently very muddled and muffled. Certain parts of the film are difficult to understand. Second is no doubt the use of non-professionals as actors. While this works at times, frequently, we have situations that are more or less one brick talking to another brick.

But the film does show some promise from Jennings, whose career was cut tragically short with his death at a relatively young age. It was the right decision to create actual fires in desolate, needing to be destroyed buildings, because this lent a certain level of realism to the film. However, I could have stood some actual tension.

I can’t help but wonder if I might have liked this film more had I watched it at a different time or under different circumstances. As it stands now, though, I can’t sa I didn’t appreciate the film, but it’s a long stretch between appreciation for what it is and enjoyment based on how it goes about doing it. In that respect, Fires Were Started is sort of half a film. I didn’t love it, but I didn’t hate it, either.

Why to watch Fires Were Started: A rare war film that doesn’t really have a lot of war in it.
Why not to watch: It really needs to be restored.

Email ThisBlogThis!Share to TwitterShare to FacebookShare to Pinterest
Labels: drama, Fires Were Started, Humphrey Jennings, I Was a Fireman, war