Film: Viggio in Italia (Voyage in Italy; Journey to Italy)
Format: Video from The Magic Flashdrive on laptop 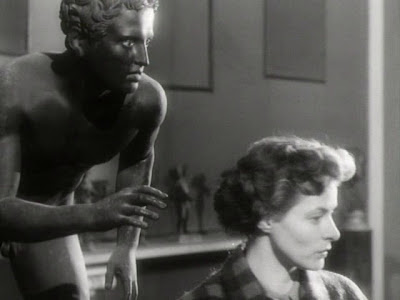 I have a strange relationship with Robert Rossellini’s films. Viaggio in Italia (alternately Voyage in Italy or Journey to Italy) is the third of his films that I’ve seen, and I’ve liked all three. What’s interesting here, what makes my relationship with Rossellini’s films so unusual is that I can never remember what he’s directed. I had to look him up to remember that he did Paisa and Open City. I don’t know why this is. I sometimes get him mixed up with Bertolucci and Antonioni because they have long, Italian names. I should try to remember a little more clearly, really.

Viaggio in Italia is an almost plotless film that follows a very familiar scenario. It does it quite differently, though. Essentially, we have a married couple on a vacation experiencing significant problems. Typically, this makes for a comedy, but Viaggio in Italia is no comedy. Alex (George Sanders) and Katherine (Ingrid Bergman) Joyce are vacationing in Italy. They’re their because they have inherited villa they want to sell.

This is a marriage in trouble. Alex and Katherine are cold and vicious to each other. Alex’s weapon of choice is sarcasm while Katherine is hypercritical of everything Alex says and does. Their already cold marriage is made colder by Katherine’s sudden remembrance of a poet she once knew. The poet was evidently in love with her, although it was non-reciprocal. Regardless, it irritates Alex, which causes the two of them to start spending time apart.

We spend a lot of time with Katherine. Her alone time is spent in museums, and it becomes almost a documentary as we look at statuary and other sites in Italy. Two things become quickly evident. A great deal of what Katherine finds deals death, particularly the catacombs. These are more or less an ossuary where locals come and “adopt” a skeleton and take care of it. She also notices a great number of pregnant women, which makes her regret her own decision to not have children.

Alex, in the meantime, heads off with a group of others and finds that he rather enjoys flirting with a number of Italian women, almost as a way to get back at Katherine for her behavior at an earlier party. He never goes so far as infidelity, though, although it’s evident that he is tempted by it. Instead, he returns to Katherine and the two continue to quarrel.

The ending is perhaps telegraphed, but it still works pretty well. The fact that this is a drama through and through is what makes it work, since it feels like we come to the conclusion honestly instead of through chicanery. Because of this, the conclusion, while a bit trite, still works.

All of this is nice, but I fail to see the film’s overall importance. This is supposed to be the Rossellini film to end all others, and from what I saw, it’s a pretty straightforward domestic drama of two people out of their element discovering that a change in location and custom and food highlights problems within their marriage that they had been ignoring because it was simple to do so. Viaggio in Italia is certainly good and beautifully shot (the statuary in particular is gorgeous), but nothing that I found particularly exceptional.

This leaves me in something of a quandary as to what to say about it. I liked it. It’s a good film and one worth watching, but I can’t for the life of me determine why it is that I was forced to walk the Earth until I had viewed it. I simply do not see its overall importance in the grander scheme of things beyond being a film that takes a typical comedy staple and turns it into something far more serious.

Perhaps I should view it again. Perhaps if I sit down with it a second time and try to dig deeper into the splintering relationship of Alex and Katherine I will discover exactly what it is that I’m supposed to see here. Until I do, though, it’s just a good film that I happened to watch.

Why to watch Viaggio in Italia: A fascinating story almost in spite of itself.
Why not to watch: It’s surprising how little there is here.