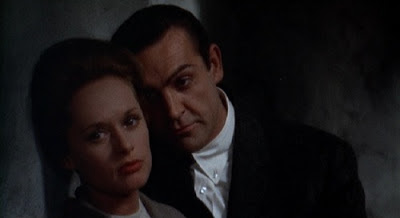 I’m going to spoil Marnie. I’m going to be upfront about this on the off chance that you, Dear Reader, haven’t yet seen it and don’t want it spoiled. If that is the case, jump down to the second picture in this review, because I won’t be spoiling the second film. In the case of Marnie, though, I figure I’m doing everybody a service. This is a film that deserves to be spoiled. That’s not something I expected to say about a Hitchcock film, but this one deserves it for being the Freudian mess that it is.

Marnie (Tippi Hedren) is one messed up little chickadee. She works a con in which she gets hired as a bookkeeper or accountant at a firm, works there for awhile until the circumstances are right, and then steals as much as she can from the company safe. Then she changes her identity by putting her hair back to its natural blonde color, and moving to another city after visiting her rather cold and distant mother in Baltimore. She also has a significant problem with thunderstorms and can’t abide the color red. In fact, red drives her berserk.

As the film starts, she’s just pulled off a theft at a particular company and is taking a short break from it, going to ride her horse and see her cold and distant mother (Louise Latham). When she returns, she takes a job at a publishing house run by Mark Rutland (Sean Connery), who sort of recognizes her from her last job. Mark is fascinated with her, and takes her out a couple of times, but eventually she rips him off, too. Unfortunately for her, Mark is fascinated enough with her that he tracks her down and offers her a choice. On the one hand, she can go to prison for the theft (and presumably several others). On the other hand, she can marry him. She goes with option B, despite the fact that she can’t bear to be touched by a man (although she fakes it pretty convincingly on their dates). This is also despite the fact that she has a rival—Mark’s former sister-in-law Lil Mainwaring (Diane Baker).

And now we get to one of the points of this film that I object to. On their honeymoon cruise, Marnie won’t spend any time with Mark until he eventually rapes her(!) and then continues on with the cruise. She attempts suicide, but he rescues her. All of this simply fuels his desire to figure out exactly what’s wrong with Marnie, but in my considered opinion, raping her probably didn’t help a whole lot.

Anyway, it all comes down to an event in childhood that we get to witness as a flashback. Marnie’s mother was a prostitute who would basically kick Marnie out of the room when a John came by. One night, a sailor (Bruce Dern) heard the young Marnie crying and tried to comfort her. Her mother thought he was molesting him and attacked him with a fireplace poker. When he fell, he injured her mother, and Marnie picked up the poker and killed him. This is why she is scared of storms (it was raining), why red freaks her out (so much blood!) and why she hates men. Seriously, what a load of Freudian bullshit. She even reverts to her six-year-old self when the story comes out, mostly because she’s repressed everything from this day and has no conscious memory of it.

The biggest problem, other than the fact that Mark rapes her and she decides to stay with him at the end, is that none of this works on its face. She wigs out completely when she sees anything red—anything. Like at one point, she spills a drop of red ink on her shirt and she completely loses her shit over it. Okay, but then how was she using red ink in the first place? How could she drive if every stop sign and red light caused her to go all wiggety? Seriously, just sitting here looking around the room I’m in, there are five or six red things just on a cursory glance.

I like psychological thrillers when they are done well. Marnie isn’t done well. The psychology is stupid and silly, the sort of stuff that people think after two weeks of a basic psychology class and give up by midterm. Hitchcock’s body of work is not something to trifle with, but Marnie is evidence that he made a number of clunkers. So how did this get on the list? Reputation is all I can figure—Hitchcock’s, not the film’s, or Connery’s, or Tippi Hedren’s. 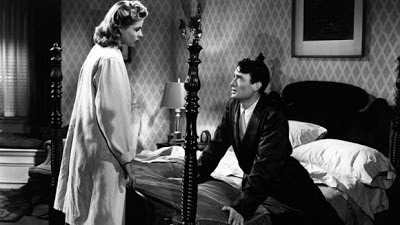 Hitchcock’s Spellbound comes from an earlier time, but the themes present in this film are almost identical to those in Marnie this is completely serendipitous—I simply found both of these films on the same set of library shelves and grabbed both, hoping to do a Hitchcock double feature. I don’t think I could have found two films from Hitchcock’s oeuvre that are more closely related despite the 20 years between them. What this means if you’ve been reading this far is that we’re going to be digging into Freudian psychoanalysis, repressed memories, partial amnesia, and identity switching.

Dr. Constance Petersen (Ingrid Bergman) works in a mental institution and is emotionally distant from her coworkers in general. The head of the institution, Dr. Murchison (Leo G. Carroll) is retiring, to be replaced by a man named Dr. Edwardes (Gregory Peck). There is an immediate attraction between Dr. Petersen and Dr. Edwardes, but not everything is kosher. It’s soon evident that there is something very off about this Dr. Edwardes character. For starters, he doesn’t seem to know that much about psychiatry, particularly about things like guilty complexes, which have always been his specialty.

Of course, there is something wrong. This Dr. Edwardes is actually an imposter, and a very sick one. The man doesn’t know who he really is, but he believes his initials to be “J.B.” He also believes that he might have been a patient of the real Dr. Edwardes and that he very well might have killed the man and taken his identity. He flees and she pursues, finding him in the hotel he said he would stay at. They run, going to visit her old mentor, Dr. Alex Brulov (Michael Chekhov), who immediately twigs to the fact that there’s something very off about “John Brown,” as he now calls himself. What follows is psychoanalysis, dreams and interpretation of meaning, and a few twists and turns as we search for the elusive happy ending that tends to follow in films made in 1945.

In a lot of ways, Spellbound presages Marnie. Where Marnie was freaked out by red and thunderstorms, John Brown wigs out when he sees parallel lines and anything that looks remotely like snow. Of course, this tracks back to the event that caused the trauma in his life and what caused his amnesia.

The most interesting sequence in the film is the dream sequence, which was evidently imagined by Salvador Dali. It looks very much like something Dali-inspired at the very least. There are eyes everywhere, and a man running around with scissors, a man with no face, and people falling. Of course, all of this plays into the event in his past in a fairly obvious symbolic fashion, obvious at least once everything in the story is understood. But it is a cool series of images.

It’s also interesting to see Gregory Peck this young and this early in his career. It’s not hard to see how he became such a beloved actor; the man had matinee idol looks in his late 20s.

In many ways, though, I have the same issues here that I did with Marnie because the same sort of pseudo-psychological bibble-babble is trotted out as being the truth. It’s more forgivable with Spellbound if only because the film is earlier, and so the level of goofiness in the science is much more forgivable.

What’s far less forgivable is some of the worst rear projection work I’ve seen since Make Way for Tomorrow, and that’s really saying something. The skiing sequence is critical to the plot (and goes back to the character’s childhood, just like Marnie), but is so obviously done in a studio that it becomes laughable.

What also makes Spellbound a much better film than Marnie is that just when we think the film is over, there’s quite a bit more to go. The big reveal of John Brown as a man who has recovered his memory seems to be the ending we expect, there’s more to come, with an extremely effective twist, and one hell of a surprising ending. In that respect, it’s a much more satisfying film, even if it’s filled with garbage psychology.

Why to watch Marnie: You’re a Hitchcock completist.
Why not to watch: Because it’s a bunch of Freudian crap.

Why to watch Spellbound: A series of twists at the end that are truly exceptional.
Why not to watch: It’s still Freudian crap.