It may just be the small bits of latent fanboy in me, but I sometimes get a real kick out of watching Arnold Schwarzenegger. I know he’s really at his best in roles that don’t involve a lot of dialogue (like The Terminator), but there’s a certain camp appeal to Arnie that I find entertaining. There’s always the potential for a couple of bad puns when he kills someone and you can general bet that he’ll yell, “Come on! Hurry up!” or something to that effect to whoever the woman in the picture is. Yes, a lot of his films are crap, and Arnold is never going to go down in history as a great thespian, but damn, he’s fun to watch. 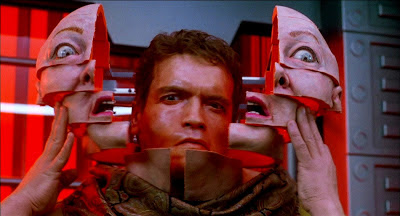 And sometimes, he’s in really entertaining movies. A case in point is Total Recall, based on the Philip K. Dick story “We Can Remember it for You Wholesale.” On the surface, it couldn’t be simpler. A guy wants to take a trip to Mars where there is currently civil unrest. As it turns out, he’s an agent under deep cover, and the trip brings out some significant problems.

The genius of the film, though, is just how much it plays with this idea of both memory and reality. Douglas Quaid (Schwarzenegger) is a construction worker with a suspiciously attractive wife (Sharon Stone). He dreams about Mars and a mysterious brunette every night, and eventually decides that he really wants to go. But, money is an object here, and going to Mars isn’t cheap. The alternative is a company called Rekall that implants fake memories into the customer’s head, giving them all of the good parts of taking a trip into space without the risk or the necessary expense.

Doug goes, and is immediately tempted by the possibility of what the company calls an “Ego Trip,” which means going as an alternate identity. Doug opts for “secret agent” as a sort of fantasy, and lists off some things he’d like to have appear in his memories. However, there is a problem when the memories are implanted; before the techs even get to putting the secret agent stuff in his head, Doug goes berserk. It appears that someone has already been messing around in his head where they didn’t belong—Doug has been to Mars, lived on Mars, and is now on Earth to get him out of the way of someone or something.

What follows is a paranoid’s fondest dream. Every possible bit of conspiracy that could show up does show up. His wife isn’t really his wife, but someone put in place to keep an eye on him. He’s immediately attacked by a co-worker in an effort to bring him in. Suddenly there are teams of goons led by Richter (Michael Ironside) seeking to capture or kill him. A mysterious man drops off a package for him containing a personally recorded message, a number of devices, and cash. And Doug Quaid, actually a man named Hauser, is off to Mars.

On Mars, he confronts the brunette of his dreams, a prostitute named Melina (Rachel Ticotin) and his nemesis, the man in charge of Mars, Cohaagen (Ronny Cox). There are also plenty of mutants on Mars, mostly thanks to Cohaagen’s creating insufficient shelters to prevent radiation from affecting the population. And there’s a rebel leader named Kuato who might want Quaid/Hauser’s help in freeing the population of the planet from wage slavery.

What really works here, though, is the amount that Verhoeven plays with the reality of the situation. Just as we get comfortable with Quaid actually being Hauser, we’re thrown another curve. We are constantly reminded that the film essentially started with people burrowing into Doug Quaid’s brain and implanting false memories there. We’re told of the rare cases that involve schizophrenic outbursts that result in the victim’s being lobotomized. We see that everything that happens ties back in to the dream spy vacation Doug Quaid asked for. And yet throughout, we’re never really sure what is real and what isn’t.

In other words, despite being a Schwarzenegger action film, Total Recall is also a really smart film. Paul Verhoeven generally handles science fiction in a fun and interesting way (particularly in RoboCop), and he does so here as well. The special effects, almost all practical, are top of the line and still really hold up. The moment of Quaid attempting to get through customs in an incredibly elaborate disguise is one of the most memorable of the film.

It also doesn’t skimp on the violence. There’s plenty of shooting going on and plenty of killing. In fact, this is actually one of the problems I had with the film. Richter and his band of thugs are entirely too trigger happy when firing into a place that is necessarily sealed off from the outside environment. At one point, Richter manages to shatter a few windows, causing several deaths and untold amounts of property damage, but he almost never hesitates to shoot directly in front of these windows as the film progresses.

I saw Total Recall in the theater 20+ years ago and enjoyed it then. I enjoyed it today just as much. It’s held up really well; Total Recall is great fun and just enough of a mindscrew to leave you with something to think about when it’s done.

Why to watch Total Recall: Films based on the work of Philip K. Dick tend to rock.
Why not to watch: You’ll never know what really happened.