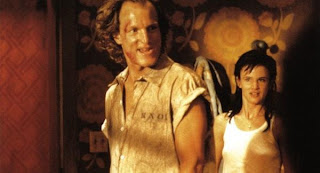 I’m not sure that Oliver Stone’s Natural Born Killers can be fully explained. It’s the sort of thing that needs to be experienced, and it’s entirely possible that a true understanding of the film requires being in an altered state. In fact, I might argue that the entire film is something of an altered state. Stone plays with film stock, genre, camera movements, animation, and any number of experimental techniques to present a bizarre and disturbing story that is half hallucination and half indictment on American media and culture.

Mickey (Woody Harrelson) and Mallory Knox (Juliette Lewis) are the central characters on a cross-country killing spree. They massacre the workers and patrons of a truck stop, leaving one potential victim alive to tell the tale, something that proves to be their signature. From this opening, we discover something about their first meeting and Mallory’s past. Her mother (Edie McClurg) is ineffectual and weak and her father (Rodney Dangerfield) is abusive both physically and sexually. When Mickey steals the family car, Mallory’s father calls out the law and Mickey goes to prison. But the two are united in spirit. When a tornado strikes, Mickey escapes from prison and returns to Mallory, and the two kill her parents before starting their cross-country murder spree.

Just as critical to the story as their murderous ways is the involvement of two other key characters. The first is Jack Scagnetti (Tom Sizemore), a cop who has taken it upon himself to bring Mickey and Mallory to justice. It quickly becomes evident that Scagnetti is just as violent and just as much of a sociopath as the pair he is hunting. The second is Wayne Gale (Robert Downey, Jr.), an Australian television presenter who specializes in lurid true-crime shows. It is his show that makes Mickey and Mallory media darlings.

This is really the heart of the film, the glorification of violence, and this is the statement that Oliver Stone wanted to make with this film. It’s easy (and common) to call Mickey and Mallory a modern-day Bonnie and Clyde, but that’s only because it’s the closest approximation of the truth of what is presented here. Mickey and Mallory, violent and terrible, merciless and remorseless, become heroes to the population, who treat each of their crimes not as horrible acts of violence, but as something else to watch on television.

It’s been a number of years since I’d seen this, and I’ve forgotten quite a bit of it. In this case, I watched the Director’s Cut, which adds some new footage. I’m not entirely sure what was new here, because there was a lot I didn’t remember from when I watched this years ago. One of the most interesting sequences is when the pair becomes stranded in the desert and encounters a Navaho named Warren Red Cloud (Russell Means) and his grandson (Jeremiah Bitsui). Red Cloud sees the demon inside the pair and attempts to exorcise it, but this brings up all of Mickey’s memories of his abusive childhood, and in a fit of panic, he shoots the old man. This brings on a type of vengeance—as they flee the scene, they walk through a nest of rattlesnakes and each is bitten.

Natural Born Killers is another film that contains so many ideas, it’s difficult to know where to begin or where to go. Oliver Stone has packed this with a massive amount of imagery, an almost overwhelming number of images that warp and change constantly. In parts, it almost looks like a stage production. Frequently, Mickey and Mallory stand in front of projected images that represent their inner thoughts or their inner demons. The open door of Red Cloud’s tent, for instance, doesn’t depict the outside, but a static shot of a wolf on a hilltop. Scagnetti often gets the same treatment because he lives in much the same world.

So, are Mickey and Mallory the product of the television generation? Are they a product of the abusive environments of their past? Are they inevitable as our culture becomes more and more obsessed with violence and cheap thrills? Stone’s answer seems to be “all of the above.” Nothing here is so tawdry that it can’t be exploited for the entertainment of the masses. Mallory’s home life is given sitcom treatment with a laugh track chiming in over the most disturbing and terrible admissions. The horror of her existence is nothing but grist for the consumer culture mill.

In a lot of ways, Natural Born Killers is the film that made people sit up and take notice of Woody Harrelson as something other than that guy on “Cheers” or an occasional comic actor. It’s also one of Juliette Lewis’s best performances. I’d be lying if I said that wasn’t a difficult accomplishment; I’m not at all a Juliette Lewis fan, but I appreciate her here more than I typically do.

All in all, Natural Born Killers is a gripping film, and one that endlessly rewards continued viewing. It is decidedly not for the timid, both in terms of constitution nor in terms of mental gymnastic ability. There’s a depth here that isn’t always present in Oliver Stone’s films, and while it’s not subtle in any way, it has moments of genius and brilliant juxtapositions—Mickey and Mallory projected onto the television of the ideal 1950s family, for instance. What Stone lacks in subtlety he makes up for with volume, though—everything he’s trying to say is obvious, but there’s so much he’s trying to say.

Why to watch Natural Born Killers: It’s unexplainable without seeing it.
Why not to watch: It may not be explainable at all.