There’s a problem with the comedy of Albert Brooks. If we lived in a better, closer to perfect, smarter and better educated world, Albert Brooks would be heralded as the funniest human being to ever be alive. Sadly, we live in a world where clowns who fall on their butts are considered the height of comedy. Albert Brooks is far more subtle. A lot of his jokes don’t have a solid payoff. What they have is a great premise that takes us to the point of the punch line, and then forces us to fill in the punch line ourselves. It’s genius stuff, really, but it requires effort from the audience. To really get why Albert Brooks is so damn funny, you have to be willing to walk part of the way there yourself, and a lot of people would rather see wacky antics. 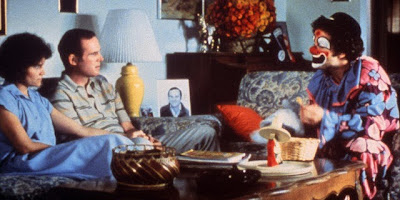 What this means is that a film like Real Life is something that will pass over a lot of people who aren’t willing to get why it’s so funny. Brooks needs his audience to fill in blanks, and with Real Life, this is particularly true. This is a mockumentary of the first order. Brooks plays himself as a filmmaker with the idea of fitting the home of a typical American family with cameras and a crew to film their lives for a year, hoping to get the actual lives of the people on film. Naturally, everything goes to hell immediately, and that’s the comedy.

Of course, the entire thing is a sham—that’s the point of the film. It’s evident immediately, since Warren Yeager, Phoenix veterinarian and head of the Yeager family to be the center of the reality documentary, is played by Charles Grodin. The problems start immediately when the family, returned from an all-expenses trip to Hawaii, come back to their home. Yeager’s wife Jeannette (Frances Lee McCain) immediately regrets the decision to take part in the experiment of having her life filmed and leaves for a weekend alone. This initial setback is followed by others in rapid succession. Her gynecologist proves to be someone who once ran a black market baby ring and appeared on “60 Minutes.” Warren double-doses a sick show horse with anesthetic and kills the animal on camera. Jeannette’s grandmother suffers a stroke and eventually dies. And slowly, the entire process of filming the lives of an average American family unravels.

More than anything, this is a film about that unraveling, and as it should, it focuses on the most interesting part: Albert Brooks. His entire being is tied up in the creation of this grand experiment, and as the family starts to fall apart on him, he becomes more and more extreme in his efforts to get them on track, effectively destroying the methodology of avoiding interference with their lives as much as possible. Eventually, the toll on everyone becomes so great that something like an intervention happens. The two psychologists working on the project (Matthew Tobin and the always-great J.A. Preston) clash both with Brooks and with each other, causing more setbacks and problems.

Very little of this is laugh-out-loud funny, but almost all of it is funny in the extreme. This is more evidence of the problem with Brooks’s comedy for the moviegoer who wants to be spoon-fed the laughs up to and including a laugh track. Frequently, something happens that is funny, but not specifically in the moment. It’s time-released, or at least time-delayed, humor, which makes the jokes all the more devastatingly funny when the humor finally dawns. But the sad truth is that a lot of viewers simply won’t put in the mental effort necessary to get the funny.

Real Life is a surprisingly innovative film as well. Fake documentaries existed before this one, but none really held the same tone. This goes less for the belly laugh and more for the jugular. But the real brilliance of the film is the ultimate target of all of that humor.

It would be simple for a film like Real Life to serve as a mirror to American culture, to lambaste us for our shallowness, our constant hungering after money and status, our cultural ignorance, or any other American stereotype. While the Yeager family is often integral to the humor of the film, it’s almost never the Yeagers who are the source of the comedy. Instead, the focus here is on the film version of Albert Brooks. He’s thoroughly unlikeable. He’s manipulative, vain, ignorant, and wasteful. Rather than going for the easy target—us—Brooks instead goes after himself and allows his fictional personality to be ruthlessly savaged.

So is he making fun of himself? Or is he making fun of the Hollywood system and the star system? Or of the movie business? Probably all of the above. It’s exciting to see a filmmaker eviscerating himself in this way and doing it strictly because it will make us laugh at him and not with him. But, of course, he’s laughing, too.

Once upon a time, while appearing on “The Tonight Show with Johnny Carson,” Carl Reiner said that the two funniest people in the world were Mel Brooks and a 12-year-old kid named Albert Einstein. That kid was a friend of his son, Rob Reiner. That kid grew up and changed his stage name to Albert Brooks. Carl Reiner was right—Albert Brooks is the funniest guy going. Well, he is if you take the time to understand why he’s so funny.

Why to watch Real Life As funny a film as you’re likely to ever see.
Why not to watch: You have to work at it.